The Book of Five Rings by Miyamoto Musashi

Proposed alternate title: Zen and the Art of Katana Maitenance 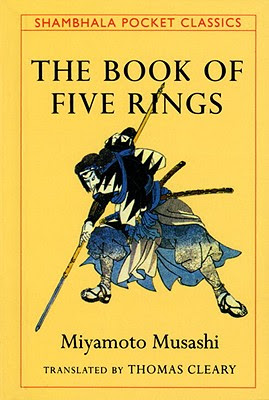 Miyamoto Musashi is one of the most famous--if not the most famous--samurai to have ever lived.  He wrote several books, but The Book of the Five Rings is the ultimate summary of his philosophy in strategy, tactics, fighting, and life.

This book is often referred to as the Japanese Art of War, but I think it's much more accessible than that--the book is surprisingly short and readable.  Musashi starts off with a short autobiography and then summarizes his method, which falls into five rings or "Ways": Earth, Water, Fire, Wind, and Void.

Since I'm not, and not likely to ever be, a swordswoman, most of this book is of limited interest to me.  If it had been a long tome or difficult reading, I would have quit--however, since it was so short, I found it pretty easy to get through even though I know basically nothing about fighting.  I can definitely see how this book is still popular with those who study martial arts.  Considering it was written circa 1645, the writing is refreshingly straight-forward (although repetitive--variations of "you must practice this," "you must learn this," etc., are found at the end of every chapter) and uncomplicated.  Yet the philosophies Musashi lays out are ones you can truly spend years trying to understand and master.

One of the things I really liked about The Book of Five Rings is that Musashi starts off by saying natural talent doesn't matter.  What truly makes a samurai is dedication and practice.  That is a rather egalitarian attitude and one that I wish underpinned more philosophies.

I first heard about this book on a TV show, Samurai, which was on the History Channel a few days ago.  Honestly, I think I learned more about the basics of Musashi's philosophy from that show than from this book.  But it was still interesting to see how the words of Musashi translate to physical action in fighting.

After reading this The Book of Five Rings, I have to say Musashi definitely deserves his rep as the greatest samurai; and if you have even a passing interest in samurai or martial arts, I definitely recommend this book.