Review: ON THE ISLAND by Tracey Garvis Graves 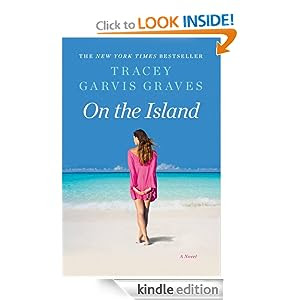 When I first heard about On the Island at A Buckeye Girl Reads, Colette described it as the type of book that makes you forget to sleep and eat until you finish it, and she was absolutely right. As soon as I started On the Island, I was completely sucked into TJ and Anna's story. I stayed up until 6 a.m. for two nights reading it, which hardly ever happens to me anymore. It is definitely unputdownable!

That being said, I'm not going stand (or sit, as the case may be) here and tell you On the Island is super-deep and meaningful, or that the writing is great. It's pretty shallow--there's not a lot of thought going on here, and most of what there is seems devoted to hygiene--and I found the interactions between the main characters to be a bit unrealistic. If you were trapped on a island with only one other person, wouldn't they start to annoy you after a few hours days weeks months years? Especially when they offer such scintillating conversational gambits as, "Oh," "Yeah," and, "That's [insert mild adjective here]." Also, it seems like TJ and Anna say each others' names a lot for no reason. Like, "Do you want some breadfruit, Anna?" "Thank you, TJ." "I know you like it, the only other person who lives on this island so who else could I possibly be talking to." After reading some of this dialog I was ready to hit both of them in the head with a coconut. Yet they only fight twice on the island, about things like, "Hey, don't go in the water while there's a shark there." You'd think there'd be at least one instance of, "If you don't stop making that whistling sound with your teeth, I am going to scream my bloody head off!"

As for the characters, I loved TJ. He really grows into a man during the course of the novel, what with catching fish, starting the fire, and building a fort house. Meanwhile, Anna washes clothes, cooks, and watches TJ watching her while he does manly things. Could these tasks be any more divided along gender lines??? Anna also has the personality of a Brawny paper towel mother. Oh, you spilled juice on the counter? That's okay, baby! Oh, you were smelling my underwear? No problem, you funny teenager, you! And if you need to punch a tree so hard you break your hand, I am not going to criticize you for it, sweetie. To quote Anachronist from Books as Portable Pieces of Thought:

STILL. I'm not one to differentiate books per season, but if there's any such thing as a perfect summer read, I think On the Island would be it. I gasped aloud several times (especially during the rat scene), honestly did not know--though I hoped--TJ and Anna would wind up together, and the conclusion was really sweet and satisfying. If you want a book that will grab you from the first page and have you saying to yourself, "One more chapter... One more chapter..." until the end, On the Island is your book.

This review is based on an eGalley provided to me by the publisher via Netgalley.
at 12:00 AM