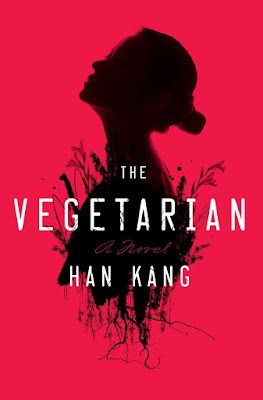 (Note: As Chrisbookarama pointed out, The Vegetarian cries out for a clickbaity title. So I used a link bait title generator to come up with one.)

A few days late, but still here! As you might know, I hosted a readalong of The Vegetarian by Han Kang for Book Bloggers International last month. Here are the discussion questions and my responses. Feel free to participate in the discussion yourself if you've read the book!


First of all! What did you think of the book in general?

Well, I wouldn't say I enjoyed it, but then I'm pretty sure that's not its purpose. It's kind of a South Korean version of The Yellow Wallpaper. It wasn't an easy read, but it did make me think.

We never get to hear directly from Yeong-hye except in brief snippets of dream and memory. Why do you think the author tells her story through the lens of other people? Do you think this is effective?

I think Kang wanted to avoid giving the reader any illusions about Yeong-hye's agency (she has none) or choice. The book as a whole really makes one question how much choice any of us have. Like you may think you have control over your own body, your decisions of what you eat every day, who you marry, and so on, but how much of that is free will and how much of it is an attempt to fit into the role and circumstances you were born into?

Yeong-hye says she stopped eating meat because she had a dream. What do you think the dream was actually about?

I think the dream was about how much she wanted to get rid of her Objectively Awful Person (TM) husband, and she realized she could either kill him or reject violence completely. Hence the veganism.

Vegetarianism and fasting has been used as a form of social protest in the past, particularly among women (see, for example, "The Awakened Instinct: Vegetarianism and the Women's Suffrage Movement in Britain" by Leah Leneman and The Sexual Politics of Meat by Carol J Adams). Do you think this is what Yeong-hye is doing? Is she refusing to eat meat in order to stick it to the goddamn patriarchy?

In a way, yes, although I don't think she sees it like that because her actions are driven by her subconscious, not logic. She just got so SICK OF IT, she had a mental break. And as my Anthropology 101 professor once said, "Our culture dictates how we break."

As the story goes on, Yeong-hye seems to be transforming into a plant herself (or at least wanting to). Is this an art-imitating-life situation?

Her hubby certainly treated her like a plant. Like, "I got this plant because it looked okay and I thought it wouldn't be high maintenance, and for a while it grew just fine as far as I could tell. Then it started withering up so I decided to get rid of it."

Yeong-hye's brother-in-law may seem more sympathetic to her than her husband, but is he?

Uhg, what a perv. He obviously views himself as better than his brother-in-law, but I doubt he sees Yeong-hye or his wife as people any more than Yeong-hye's husband did. There's also a part where he says he just assumes her silence is consent. Um, no.

There's a surprising amount of violence, both psychological and physical, in this book. Why do you think that is?

Yes. One would expect a book about a vegetarian to be violence-free, but nope! I think it's a response to the conformity of the society. People can't act out or express their emotions, so anger and fear and other negative feelings get pushed deeper and deeper inside until a person can't take it anymore and then it explodes out of them in unhealthy ways.

There's a part of the book where Yeong-hye says she felt like the dream that made her turn vegetarian came from her stomach. "The face is inside my stomach. It rose up from inside my stomach." I found that interesting because the gut is called the "second brain," and it responds to a lot of the stimuli in our brains that we don't want to deal with.

I also think part of it has to do with certain social contracts that accept violence as a way life, which exist in all cultures. Extreme examples would be slavery, or war. The killing of animals for meat is also an act of violence, one we accept because we're taught we have the right–maybe even the responsibility–to eat meat. But whether that's true or not doesn't make the members of a society any less complicit in the violence perpetuated by that act.

There are a lot of themes in the novel: obsession, dreams, conformity and acting "normal," choosing to act morally and choosing not to. Which of these themes stood out for you the most?

I would say each part of the book focuses on one theme more than the others. Part 1 was about conformity and Yeong-hye's rebellion against society and her husband's and family's expectations. Part 2 was more about obsession and allowing it to overtake your life to the point where right and wrong don't matter as long as you can make your fantasies a reality. Part 3... well, that one was a little muddy for me. I would say normality and how there's no such thing as "normal," but I don't think Part 3 was as well-realized as the previous two parts of the book.

Finally, what did you think of the ending? Does it negate the previous sections of the book?

To be honest, when I first read it I hated the ending. I thought the point of Yeong-hye's story was that she wasn't crazy, people just thought she was because she was rebelling against a false construct wherein she had to put up with raw deal she never agreed to. But the ending implied Yeong-hye was certifiably insane. So if that was the case, her family was right and choosing not to eat meat was the act of someone with "hints at hysteria, delusion, weak nerves and so on".

However, later I read this review of The Vegetarian, where the writer suggests that maybe Yeong-hye's gradual starvation is a form of sallekhana, a fast to the death practiced by Jains in order to "extricate... the devotee from the endless cycles of violence in which we are embedded." That sounds like it fits into the themes of the book better than just making Yeong-hye crazy. But it's hard to say for sure if that was Kang's intention.


Have you read The Vegetarian? What did you think?