Sunday Snapshot is Back! 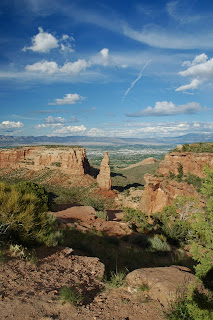 Dewey Decimated by Charles A Goodrum: I seem to be on a books-about-libraries kick lately. I spotted this one while my mom was purging her shelves and decided to give it a try.

The Passion of the Purple Plumeria by Lauren Willig: This is the first Pink Carnation book I've picked up. We'll see how it goes.

I finally posted my review of The Art Forger last Sunday in lieu of a Sunday Snapshot.

First of all, I'm a sucker for noir crime movies set in Los Angeles, which is probably why my list of favorite movies includes LA Confidential, Mulholland Drive, Heat, etc. etc. And second of all, I love buddy cop stories. So this movie was pretty much guaranteed to make me happy. The plot, which centers around a porn film and political corruption, is suuuuuuper dumb; but this a minor point. Most of the movie is about watching Crowe and Gosling travel around LA getting into hilarious hijinks. The two have fantastic chemistry and are fun to watch, but the real star of the movie is Rice, who plays Gosling's preternaturally self-possessed 13-yo daughter. I wish this movie was a series so I could keep watching these characters! An entertaining flick for sure.

It's been a busy few weeks, friends. I was working double time at my day job to help out while the owner and his wife were on vacation. I also got a new writing gig (hopefully, if my first few articles are what they want–fingers crossed!), so I had to focus on that and try to make some really great words. hooray words

Then on Wednesday my mom and I went to Palisade to visit some Colorado wineries. After that and the wine course I'm taking and the article I wrote on rosé wine, I am wined out! I think the trip will be a good investment for future articles, though, and we had fun.

My favorite part of the trip was actually visiting Colorado National Monument. Here are a few pics: 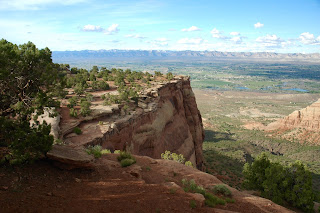 I'm hosting Tech Month in June over Book Bloggers International! If you have any favorite apps, tips, websites, or blogging tools you'd like to write about, email me over at BBI.


Have a good week, everyone! 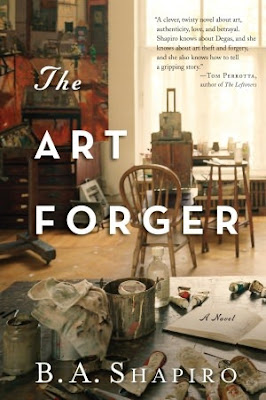 Claire Roth, expert Degas art reproducer and aspiring painter of original works, is approached by gallery owner Aiden Markel to paint a copy of a Degas masterwork. It would be business as usual for Claire, if only the painting wasn't the one stolen in the infamous 1990 Gardner Heist. But is the painting *really* the one painted by Degas? And will Claire and Aiden get away with switching one painting out for another?

Setting the very dodgy art history in this book aside–which I'm willing to recognize few besides myself would care about–The Art Forger had some major narrative issues that prevented me from thoroughly enjoying it.

First and least of all, The Art Forger is a bit predictable and some plot points rely way too heavily on convenient coincidences. For example, Claire's only friends include a curator at the Isabella Stewart Gardner Museum, plus a lawyer with a passion for art. You can see where this is going, can't you friends? Hint hint: the curator will intervene on her behalf and the lawyer will keep her case from turning into the next Netflix true crime documentary series.

Secondly and more annoyingly, the plausibility issues were occasionally mind-boggling. The one I kept getting stuck on was that she approaches her curator friend with the story that: 1., the recently returned Degas painting is a copy that she painted; and 2. that she thinks the "real" Degas is hidden in a museum sub-basement.

This is not suspicious in and of itself, but given that said curator friend knows she's been shacking up with the man recently arrested for selling the stolen Degas painting, I find it incredible he didn't add two and two and come up with THEY WERE IN ON IT TOGETHER. I mean, that's a pretty odd coincidence, no? Yet instead of exhibiting natural skepticism, he swallows Claire's story whole and winds up endangering his job–something I can tell you for a fact is NOT easy to come by–by letting her into the museum after hours. Don't even get me started.

Another point that made my brain hurt was Claire's belief that if she found this mythical "real" Degas painting, Aiden will no longer be charged with selling stolen goods.

OKAY, BUT WHAT???? Just because the stolen painting wasn't a real Degas doesn't mean Aiden didn't sell stolen goods. It was still the painting that was stolen from the Gardner. Whether it's a Degas or a Dr Seuss isn't really relevant to the question of his guilt or lack thereof.

Not to mention there's this whole thing about intent and, since far as Aiden was concerned the painting WAS a real Degas, and he did fully intended to make money off it, you can't really argue he's not guilty. Unless you're delusional, have never watched TV, and can't be bothered to read up on basic US laws.

Finally, there's a whole bunch of pointless, boring stuff. Tip: go ahead and just skip over Belle Gardner's letters. The characters sum up what they were about for you at the very end of the book, which is handy. The scenes in the prison, which I imagine were supposed to make Claire seem like not quite as much of a greedy sad sack with a broken moral compass, were simply irritating; and the flashbacks to her contretemps over her first forgery didn't impress me with her emotional maturity or intelligence.

Basically, I found this book to be pretty difficult to buy into. Maybe I just know too much about art, but I'd like to think whatever knowledge I posses or don't wouldn't matter with an author who does their homework and takes the time to establish character motivation. And besides, at least half of the stuff that bothered me wasn't about art at all.

I did enjoy Xe Sands narration on the audio, but I probably won't be checking out any of Shapiro's other books.

The Invisible Library by Genevieve Cogman: Fun if not exactly original.

Still Life by Louise Penny: Ben totally did it, guys.

I haven't watched any movies recently. I am working my way through Unbreakable Kimmy Schmidt on Netflix, about a woman who goes to NYC after being trapped in a bunker for 15 years. It's a cute show! I definitely recommend it to anyone who went through middle school in the '90s.

Busy! Last week the gun store moved locations and I helped out with that. The owner and his wife are also away on vacation, so I've been working double time there to help out. Fortunately I haven't gotten any major writing assignments in so far, so I'm not too stressed out.

This is bizarrely the most popular thing I've tweeted in months. Possibly years. Via xkcd:

But seriously guys, enough with the full-width justification.

Have a great week!