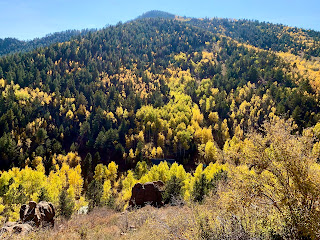 Happy Sunday, everyone! Hope you've all been doing well since I last posted in August. It's snowing like gangbusters here but luckily we were able to get up to the mountains and see some of the aspens turning before they lost their leaves.
Anyway, let's dive right in to the Sunday Snapshot!

Party of Two by Jasmine Guillory: I bought a paper copy of this book for myself for my birthday. Like all of Guillory's books it's a light, fast-paced, enjoyable read.
An Obvious Fact by Craig Johnson: I've been working my way through the Walt Longmire series on audiobook. So far I'm enjoying this one: it's set during the Sturgis biker rally and features Henry's ex, Lola.

Tenet, starring John David Washington, Robert Pattinson, and a nearly completely unrecognizable Kenneth Branagh
I am a huge Christopher Nolan fan, so nothing was going to keep me from seeing this movie in theaters. It is very, very cool. Is it as successful as Inception or Interstellar? In my opinion, no, and I think that's because unlike those two movies this one isn't based on mythology. It feels complex but not deep, like an ouroboros. That said, it is a wild ride and I would definitely watch it again.
As a side note, is RPatt trying to pay down his mortgage all of a sudden or what? First Tenet and then Batman? I thought he'd sworn off blockbuster movies.

Where'd You Go, Bernadette, starring Cate Blanchett
A frustrating and depressing movie based on a book that I mostly remember as enjoyable. I loved (/sarcasm) how everything is twisted around so that it's Bernadette's fault, including her completely unsupportive husband sleeping with his secretary!
Do not recommend, and I plan to avoid any other Richard Linklater movies in the future.

Sorry to Bother You, starring Lakeith Stanfield and Tessa Thompson
A super duper weird, surrealistic movie. Broke and without many prospects, Cash Green gets a job at telemarketing firm where he's paid bupkis. But all that changes when he adopts a "white voice" over the phone. Suddenly he goes from zero to hero at the firm and starts earning major bonuses. Ensue hilarious social commentary? Not quite.
I think if you like films like The Cabin and Get Out you'll want to watch this movie. I can guarantee you won't be able to predict where it's going.

Enola Holmes, starring Millie Bobby Brown, Sam Claflin, and Henry Cavill
Who could have predicted I'd want to watch this??? Basically, the beginning was slow and boring, and the ending felt like a million things thrown together at once. But the middle part was fantastic! I really hope they continue these movies as a series so I can see more of this ridiculously attractive Sam Claflin person.

You'll all be happy to know that I've managed to keep myself from either reading or watching anything related to Twilight for the past few weeks. Well, except for that one time I rewatched the first movie again. But minor slip. 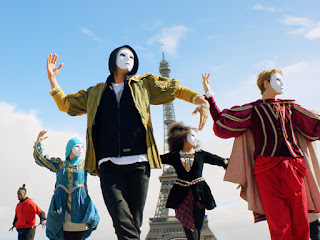 In Find Me In Paris news, I made it to season 3 and I'm super annoyed because Max left the show, and the way he left didn't even make sense! So in the final ep of season 2, Lena (the time traveling ballerina) told Max she was a time traveler and she was going back to 1905. And he BEGGED her not to go and even tried to go after her, but the portal closed. Fast forward to season 3: Lena returns to the present to find that Max has left to go to America, even though he's from London and said he was planning to go there. So he begs her to stay, tries to follow her, and then immediately leaves for another continent? What??? Also, they're not even in Paris anymore, they moved to the South of France, which. Not Paris. Just saying. 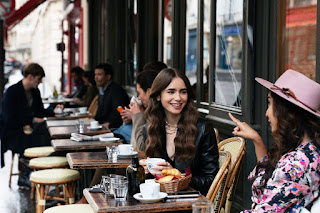 Anyway, I felt like I needed a break from the time traveling ballerina after that, so I switched to Emily in Paris, which is a fantastic show that only has ten episodes and gives me all the Paris feels. And I could definitely use some glamorous Parisian escapism right now. Recommended!

Cabin fever is definitely setting in at chez heidenkind. School started at the university with 50% on-campus staffing limits. On the plus side, we didn't have to go through screenings anymore, which I was happy about because they were a pain. And it was nice to be with my team in person a couple days a week instead of communicating over email or zoom all the time.
The week before last we moved into a space where I actually had my own office instead of sharing one or using the closet. Just in time for them to tell us they're rolling back the staffing limit to 25% and we'll all be 100% remote again after Thanksgiving break. At least they gave us a few days' notice this time instead of 12 hours like they did in March. But the sum of it is, since our team is so small and only one of us really needs to be on campus to do their job, I'm going back to 100% remote. I wouldn't say I'm broken up about it, especially on days like today when it's snowing and I know the roads will be awful the next morning, but still.
Meanwhile, I've accumulated so many hours of annual leave that I HAVE to take at least 16 hours a month or I'll start losing hours. I don't know about you all, but I am going to take a looooooong vacation once this is all over.
In other news, it was my birthday this month. I turned 40 (!). Yikes. I am officially old. Olllld old old. For a birthday during quarantine it was okay. I bought some champagne for myself, some books, and I got Japanese gin and a backup camera as presents.
I've also been reading some pretty good books lately. Boyfriend Material by Alexis Hall has to be my favorite read of the year so far: awesome characters, super fun story, a ton of Britishisms I immediately started throwing into casual conversation, and just an overall excellent romantic comedy. A few other recent reads I highly recommend:
That's all that's been going on in my world! Do you have any books, movies, or television to recommend as we slide into the holiday season?