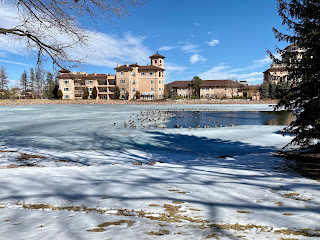 It's spring! We made it! While spring in the Rockies can be volatile, I'm happy the days are getting longer and I have the occasional opportunity to work outside.
Currently Reading: 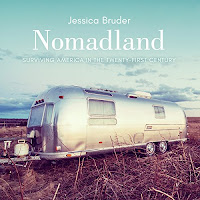 Nomadland by Jessica Bruder
After watching the movie, I was curious what the book covers and how. I'm glad I watched the movie first because otherwise I probably wouldn't have made it very far into the book. It is a good book, it's just kind of a bummer.

The Royal Bodyguard by Lindsay Emory
I actually listened to this on audio in February. Then I read the previous book in this series, The Runaway Royal, and enjoyed it so much I decided to reread the sequel immediately afterward. There's a lot going on in this one and not all of it comes together or makes sense, but if royal romances are your jam it's worth checking out.
Movies Recently Watched:

Minari, starring Youn Yuh-jung, Han Ye-ri, and Steven Yeun
I didn't get as emotionally invested in this movie as a lot of other people, but it is really good and worth watching. Gorgeous cinematography and a quiet, heartfelt story about family and perseverance.

Nomadland, starring Frances McDormand
The best movie I've seen in a LONG time. At first you think it's going to be about socio-economics; then it turns into a modern-day western with metaphors about freedom and discovering the landscape of America. Finally, at the very end it touches upon the meaning of life and death. Highly recommended!

WandaVision, starring Elizabeth Olsen and Paul Bettany
Technically not a movie, BUT OMG YOU GUYS THIS SERIES. I'm not usually a fan of the whole Marvel Comic Universe thing (why do I have to watch Winter Soldier to understand what's going on with Agents of SHIELD, huh?), but I am a fan of Paul Bettany, so I decided to give it a try. First they pull you in with the charming romantic comedy and the next thing you know, you're sobbing over an episode of Dick Van Dyke! Soooo so good. I haven't binge watched a series this hard since Scandal.

I Care a Lot, starring Rosamund Pike
The message got pretty muddled there toward the end, but it's Rosamund Pike being a badass, soooo. ¯\_(ツ)_/¯ Also why does everything have to include gangsters.

The Dig, starring Carey Mulligan and Ralph Fiennes
My big takeaway from this film? Archaeology is not worth it. So much mud.
These weeks in heidenkindom:
I haven't gotten the vaccine yet; I'm not even on a list to get the vaccine yet. But my parents have their second shot scheduled for this Monday, so there's progress being made.
Despite not having the vaccine yet, in February I decided I needed to take a staycation and get some physical separation from home for my own mental health. As much as being home and not working is nice, when you're home there's always projects and to-dos that need attention. What I really needed was a few days of forced inactivity and some new scenery to get a refresh.
To that end, I spent three nights at a resort less than an hour away from my home. It wasn't really my scene – picture a lot of retirees – but the weather was gorgeous so I could walk around the grounds, go to the zoo, and sit outside and write and read. It was definitely the break I needed.
A few pics:

The only major bummer was that only 2 of their restaurants were open for dinner, there was no live entertainment, and lunch options were basically a take-away café (which actually had pretty good options, but still). But overall it was a nice break.
I'm also still WFH 100%, although we CAN go onto campus if we want to, as long as we keep capacity at 25%. I may go onto campus sometime soon just to remind myself how much I hate the drive.
That's the main things that have been going on here! What's been happening in your neck of the woods?
Discus this post with me on Twitter, FaceBook, Google+ or in the comments below.
at 5:21 PM