Another Bloggiesta is over. If you read my starting post this Friday, you know my goal this weekend was to get my professional writer website set up. I'm happy to say I completed my goal and natashabrandstatter.com is now live!

I even managed to complete Monika's mini-challenge by making an image map for my social media contact links. If you have the time and inclination to check out my site, let me know what you think and if you have any suggestions.

Thanks to the Bloggiesta team for another successful blogging fiesta!

Email ThisBlogThis!Share to TwitterShare to FacebookShare to Pinterest
Tagged: bloggiesta

It's Bloggiesta again, just a short one this time, which will last over the weekend. Bloggiesta, if you don't know, is a chance for bloggers to get together, party, and maybe work on their blogging to-do lists if there's time after that.

I wasn't planning on joining in Bloggiesta this weekend, but then I decided to start a new blog/site. YES, ANOTHER ONE. But this one is my writer website, with its own domain name and everything. Just like a real writer!

I signed up for the domain and managed to get Blogger and my domain host to talk to each other without bursting too many blood vessels of rage this afternoon, so now all I have to do is polish the site up with links and images and about pages, etc. I'm pretty excited! I've never had my own domain before. Here's my to-do list:


I might also check out a few mini-challenges if I have time. Are you joining in Bloggiesta this weekend?

Email ThisBlogThis!Share to TwitterShare to FacebookShare to Pinterest
Tagged: bloggiesta 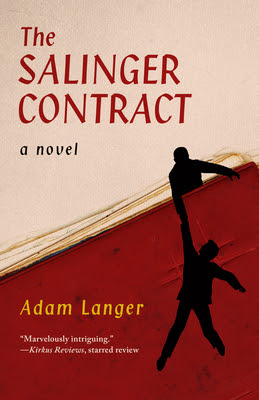 I received a digital copy of The Salinger Contract for review consideration, which didn't influence my opinion of the book in any way.

Adam Langer is an emasculated writer playing house husband in Bloomington, Indiana. His life revolves around laundry, dirty dishes, and his daughters' ear infections. Adam hasn't finished writing a story in YEARS--creatively, he's impotent. But all that changes when he happens to meet up with a fellow author, Conner Joyce, a best-selling writer of thriller novels whose star is on the wane. At least, until he's approached by a bespoke Waldo Lydecker type named Dex. Dex has an offer Conner can't refuse: write a novel just for Dex, for two and a half million dollars. The catch? No one else can ever know about the novel or their deal. Of course, Conner accepts. But it isn't long before he suspects he's made a deal with the devil and turns to Adam for help.

Basically, I loved this novel. When I started it I was in one of those Simon Cowell moods. You know, when everything you pick up makes you go, "BORRRRING. Next!" Or maybe that only happens to me. ANYWAY, The Salinger Contract managed to capture and hold my attention from page one despite my mood. It's fast-paced, unputdownable, and positively delightful, especially if you're a fan of olde-timey crime novels or film noir movies.

Like his friend, Conner, Adam uses an excess of detail to make what would be an otherwise outlandish plot convincing. Thankfully this detail does not involve unnecessary clothing descriptions or other crap I don't care about; instead, the details focus on books, which apparently does not bother me at all. For example, instead of reading his kids an unnamed book before bedtime, Adam reads them Lyle, Lyle, Crocodile. Love that. I also found the portrait Langer paints of life in a small university town to be wry, cynical, and dead-on accurate. One of the university professors Langer describes is so exactly like a former professor of mine that I actually checked to see if he ever taught in Indiana (he hadn't).

Adam's portion of the book was so realistic and pitch-perfect that when Conner's completely bizarre story began, I was 100% ready and willing to be sold on it. The only glitches that niggled at me were Conner's hesitation in signing Dex's contract—I'd be like, "Givemethatthankyoubyenow." And also, it didn't sound like Conner put any money aside for taxes. I think the IRS would probably notice if your bank account suddenly went up by 2.5 million, don't you? I'll also say that I saw all the twists coming pretty early in the novel. But neither that, nor my little niggles about the tax thing, prevented me from thoroughly enjoying The Salinger Contract and wanting to know what happened next.

The thing about this novel is that it tells the type of story that any author or reader would WANT to be true. I mentioned at the beginning of this post that Adam starts the story as emasculated, incapable of creating anything. The same could be said of the other major character, as well: Conner is having problems with his wife, looking at having to sell his house and car, and feeling like his entire career consists of rewriting the same book over and over. Then he agrees to write a novel for Dex and suddenly everything's coming up roses, and not just in the financial department: he's full of inspiration, writing constantly, and his wife and he start trying for another baby. Likewise, in listening to and then telling Conner's story, Adam finds a way to save his family from destitution and discovers who he is—again, not just through money, but by using stories. The Salinger Contract isn't just a fast-paced thriller (though it is that), but a book about the power of stories to inspire people to the point that they're empowered to act out those stories in their own lives.

It's also about the connection between an author and reader that's formed through books. It's one the author's usually completely unaware of and not responsible for; but for the reader it feels very personal, possibly because it says more about them than the book. It's that relationship that gives a story life, and one that every author wishes for their work.

If you're a reader (and since you're visiting this blog, I'm going to assume that you are) who enjoys mysteries, thrillers, or books about books, I would definitely recommend The Salinger Contract. Oh, and I'm totally drinking at the Coq d'Or the next time I'm in Chicago. Cuz you never know. 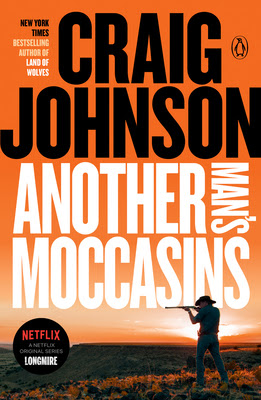 When the body of a young woman is found off of I-25, within spitting distance of an underpass where a homeless man with obvious psychological problems is hiding, the murder seems like an open-and-shut case. But not to Sheriff Walt Longmire. Despite the fact that the man in question, Virgil White Buffalo, attacked him, Walt isn't so sure Virgil would kill anyone without a reason. And when a photograph of Walt taken in Vietnam is found among the victim's possessions, he knows there's something more to the woman's story—he just has to figure out why she's in Wyoming and how she's connected to his past.

This is the fourth (I think? Yes, fourth) book in the Walt Longmire series by Craig Johnson, and it's a quick read. I enjoyed it, even though I do have to admit I completely skipped the backstory scenes set in Vietnam. You know me—I don't have the patience for backstory. I did read the first few, and young-Walt and -Henry were adorbs, but I have to say the novel didn't suffer for my having skipped over those scenes at all.

Okay, I'm about to get spoilery, so if you can't handle gigantic hints about who the murderer is, skip the next paragraph.

Another Man's Moccasins is one of those mysteries where whodunnit is obvious pretty early on, but Johnson tricks both Walt and the reader into questioning their instincts by using their insecurities and sympathies against them. I have to say, it was pretty well-done. All of the main suspects are strangers, people passing through Absaroka County on their way to somewhere else. All of them have some history with violence, and two of them are part of racially discriminated groups—Indian and Vietnamese. Is Walt targeting the other two suspects more than Virgil because he sympathizes with a fellow Vietnam vet (as Henry says after Virgil's arrested, "He's one of us," and he doesn't mean Indian. Cue band of brothers reference), or because his experiences in Vietnam have prejudiced him against Vietnamese people? Some of the new guys on Walt's staff assume it's the latter, which kind of hurts his feelings. So he spends the rest of the book asking his friends if they think he's prejudiced, and I would be tempted to say the novel is about prejudice if the mystery hadn't shook out the way it did. Instead, I think the point is that you shouldn't judge someone's reactions as unreasonable or crazy or prejudiced until you know where they're coming from.

Anyway, the mystery in Another Man's Moccasins is pretty straight-forward, which is probably why this book is so short. Even if you don't skip the Vietnam scenes, it's still less than 300 pages. But it gives Johnson an opportunity to explore the effects of war on Walt, his BFF Henry Standing Bear, his mentor and the former Absaroka County sheriff, Lucian, and Virgil.

Another of the things I really enjoyed about Another Man's Moccasins is that Johnson's background in playwriting really shines through, especially in the second half of the book. The climax is perfect: spooky, dramatic, with an almost Shakespearean conclusion. And the book plays around with concepts of perception and knowledge that demonstrates a more sophisticated use of storytelling than in the previous Longmire books.

So as Walt would say, Yep. Another good book in the series.