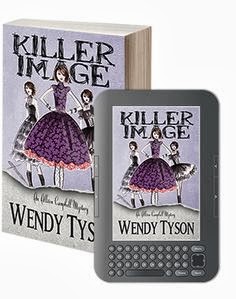 I received a copy of this book to review from Netgalley via TLC Booktours.

Allison Campbell is a fashion consultant to the wealthy socialites of Philadelphia, particularly older women who've been divorced. When a teenage client is accused of a ritualistic murrrrrderrrrr, Allison is the only person who believes this Goth girl is innocent. Can Allison give her client a makeover AND find the real killer?

Killer Image was SO not my thing. Based on the cover (which has recently been changed to something awful), I was expecting a light, fun, cozy mystery about fashion and high society. What I got was one of those depressing, hard-boiled mysteries where everyone has Problems. I'm talking needs-to-seek-psychiatric-help, capital-P-problems. EVERYONE, from the main character to the murder victim, to the suspect, to the suspect's parents, to every single person the main character knows. And I knew everyone single person in the main character's life had problems because I was told about it in great detail, even though it had zippo to do with the plot.

This novel also needed to be edited way, way down. It has a prologue that's labeled Chapter One, and it follows the activities of the most random-ass minor characters FOR NO REASON other than to tell me about their Problems. For example, Allison's assistant was a very intriguing character—possibly the most interesting thing in the entire novel—until we got to follow him around, day-in-the-life-of style, as he makes his weekly visit to his ma and the whores (literally, women who abide in a brothel and have sex with men for money) he sleeps with. What does this have to do with story??? Nothing, other than to let me know HE HAS PROBLEMS. Maybe I'd care more about everyone's Problems in Killer Image if I was given a chance to wonder what they were; but not only did I not wonder, I didn't want to know.

Despite über-long info dump descriptions of everyone's psychological and socio-economic Problems, there were no unnecessary clothing descriptions. Which is kind of weird, considering Allison is a fashion consultant and wrote a book about clothes.

As I said, Killer Image was very much not the type I go for. I wound up DNFing it out of frustration and boredom. But if you like hard-boiled detective stories where everyone's a psycho and which take forever to get to the point, you'll probably enjoy it more than I did.

Review: CROCODILE ON THE SANDBANK by Elizabeth Peters

Having just inherited a large estate after the death of her father, Amelia Peabody decides to indulge herself with an extended around-the-world vacation. Along the way, she rescues a younger woman named Evelyn who's been abandoned in Italy by a fortune hunter. Together, they travel through Egypt fending off a mysterious mummy and helping a pair of archaeologists named Walter and Radcliffe Emerson.

So the plot to Crocodile on the Sandbank is basically the same as Pride & Prejudice, only instead of two wealthy friends rescuing two sisters from genteel poverty, two wealthy women friends rescue two brothers from genteel poverty so they can dig in Egypt to their hearts' content. And there's a mummy. If anyone can take Jane Austen and create something completely original, it's Elizabeth Peters—I love the way she turned traditional romance tropes upside down. Evelyn's rescue, for example: in a typical romance, it would be the hero who saves the damsel in distress and insists on buying her clothes and sweeping her off to some exotic foreign country. In Crocodile on the Sandbank, it's Amelia; and the two become friends, not lovers. I also liked the fact that she and Evelyn are the independently wealthy characters in this scenario while the Emersons are in need of money (see my review of The Bridge).

I actually read Crocodile on the Sandbank when I was a teenager, and to be honest I didn't like it. As an adult, I can see why: Amelia is exactly the type of personality that would have annoyed the crap out of me as a teen. She takes over everything, thinks she's always right, and she is very much a nineteenth-century British colonialist, swooping in to save the ignorant natives from their primitive medicines and beliefs. She can be kind of insufferable some most of the time. As an adult, though, I actually found Amelia to be pretty awesome. Yes, Amelia can be annoying, but she also gets shit done. And while she might not be polite, she is genuine and kind. Amelia is a fantastic, well-rounded character who's totally of her time period, flaws and all, yet still sympathetic.

As for the other characters, Evelyn wasn't as annoying as I remember her being, either. She's not as take-charge as Amelia is, but she also isn't wishy-washy and in her own way is just as independent as her friend—she just has better social skills. I honestly didn't remember anything about Walter or Lucian. As for Emerson... well, who can resist someone that grumpy? He's like if Dr. House was an archaeologist.

I also listened to this on audiobook, narrated by Barbara Rosenblat. I've listened to audiobooks narrated by Rosenblat before (a few of the Mary Russell mysteries, for instance), and she was good in those. But Rosenblat + Amelia Peabody is like magic! She embodies the character of Amelia and brings so much humor and depth to the story. It was a joy listening to her narrate.

I'm glad I decided to give Crocodile on the Sandbank another shot. The mystery plot's kind of weak—it's obvious who the mummy is from the beginning—but the book isn't really about the mystery, it's about British Egyptology in the Victorian era and a woman who finds her place in the world. Definitely a must-read, especially for those of you who enjoy listening to audiobooks.

His erection still stands! (Does anyone besides me get that reference? Moving on...)

It's 4 a.m. and Henry's on the Brooklyn Bridge. After years of struggling with depression, he plans to commit suicide. But when he gets to the top of the New York-side tower, he finds someone's already there: Christa, who's just been diagnosed with breast cancer for the second time. Although neither of them want to keep on living, they don't want someone else to die, either; so they make a pact to give one another each 24 hours to convince the other person to live. IT'S THE PERFECT PLAN that doesn't make sense. Will these two lonely kids save each other?

Suicide romance, you guys! As soon as I saw The Bridge reviewed at Dear Author, I knew I wanted to read it. The premise is crazy-unusual; so crazy I figured it just might work. And it does, x1000. I loved the hell out of this novel and would recommend it to anyone who enjoys a good love story.

Now, I know what you're thinking (because it's what Colette from A Buckeye Girl Reads said to me when I told her she should read this): A cancer patient and chronic depressive who want to kill themselves? Sounds depressing! It's not. First of all—spoiler alert!—they don't end up committing suicide. The Bridge isn't about death and depression, but about life and forming connections with other people. "The bridge" isn't just the scene of their first meeting, but a metaphor for the choices the characters make during the course of the book: to stop being scared, to accept the possibility of pain and rejection, to let other people in. A romance novel with a literary metaphor! Crazy, right?

Even without the metaphor and overarching themes, The Bridge is a compelling story that had me from the "meet cute" scene (I feel a bit wrong using that term for it considering the circumstances, but hey). You know from the outset Christa and Henry are going to convince each other life's worth living, but you don't know how, or why they decided to end it. And you want to find out, because The Bridge immediately sets up a paradigm where a person's public identity and inner life doesn't match up. For example, from the outside Henry looks like a guy who has everything: he's from a wealthy family, makes a ton of money at his job, has the posh apartment, the car, the closet full of Armani, is good-looking; yet he wants to die while homeless people who live in cardboard boxes don't. Why? It's curious. The book definitely takes the view that you can never know what another person is thinking, and because of that you can't judge another person's life.

Finally, I loved the main characters, especially Henry. They were both incredibly sympathetic even though they each have some serious problems and make some very selfish decisions. As someone who has struggled with depression off and on since middle school, a lot of Henry's statements really resonated with me. He's also a super-sensitive, sweet, empathetic guy. Disliking him would be like saying you don't like puppies. I didn't feel like Christa's character was as strongly fleshed-out, but I couldn't blame her for being angry and bitter and scared, all things considered.

I'm not going to say The Bridge was absolutely perfect—I was a bit bothered by the fact that it's the bazillionth gajillionth romance novel with a hero who has more money than he knows what to do with and a heroine who's barely scraping by. Why couldn't Christa have been the rich person in this scenario? The musical references in the book were also really annoying and threw me out of the story every time. They were all songs from the '70s that were very literally about loneliness, blah blah blah. This would be bad enough if the characters didn't call them horrible and cheesy when the songs were mentioned, but they do and it's aggravating, especially in one scene where a homeless vet sings "Desperado" on a subway train. First of all, don't shit on the Eagles; and second of all, yeah, that song seems ridiculous IN THE CONTEXT OF THIS BOOK. It doesn't belong, so why is it there (this, incidentally, is the reason why song mentions in books tend to bother me).

Other than that, though, The Bridge was awesome. It's a completely satisfying read that's full of hope and optimism and even faith, though not of the religious kind. I'm glad I took a chance on it and look forward to reading Rebecca Rogers Maher's other novels in the future.