I'm anticipating Sunday by a few hours this week because my mom and I are going on a winery tour tomorrow. AND THEN we're going to The International Exhibition of Sherlock Holmes! My level of excitement is currently hovering somewhere between Christmas and attending a Jane Austen convention where Colin Firth will be wandering around in a wet shirt.

A Kind of Grief by AD Scott: Found this in Barnes & Noble and was lured into trying it by the Scottish setting.

An article on the real-life Irene Adler over at Book Riot.

Anyone who knows me knows I love spy movies. I watched this on the plane from Dublin and really enjoyed it, although McCarthy seemed a little too spastic at times. Jonathan Statham was hilarious, and I liked Jude Law in the role of Smooth Spy Dude, even though his American accent was super dodgy and I saw the "twist" with his character coming from a continent away. Would not object to watching this one again.

There was soooooooooooo much science. Don't get me wrong, it was a good movie and I enjoyed it, but it was also reallllly looong. I may have nodded off there toward the end. Like just get Damon on the spaceship and end the freaking movie already, Ridley Scott. I would like to read the book now, though.

I feel like I watched another movie in the last three-ish weeks, but I can't remember what it was. Hm. 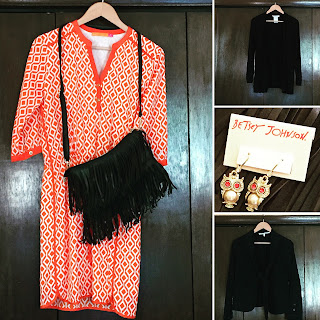 There was a Le Tote box waiting for me when I got back. It wasn't the greatest selection this time around, which is hardly surprising since I picked it out at seven in the morning using my phone. Anyway, I liked the purse and the owl earrings (even if I couldn't get them in my ears), but the other items were not my jam. The cardigan's pockets were sewn shut. WHO DOES THAT? 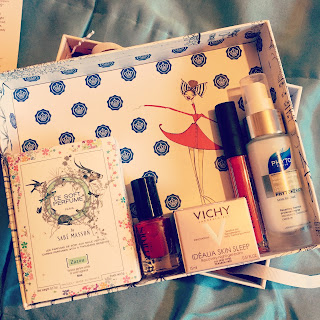 My second and last Glossybox was also waiting for me when I got back. Despite my issues with Glossybox's account policies, this box wasn't too hateful. The theme was France. I liked the lip gloss and nail polish, and the perfume stick was actually okay. Wound up tossing the skin care products because they contained fragrance, which makes me break out. 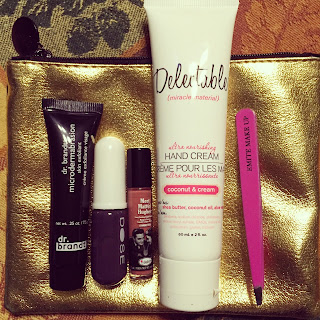 October's Ipsy Glam Bag was also okay, although: ANOTHER gold bag? Vomit. Anyway, I really love the matte lip gloss. I didn't expect to, but it smells divine and lasts a long time. I like the shade of the nail polish, but who the hell puts a round bottom on a nail polish bottle??? The tweezers seem random. 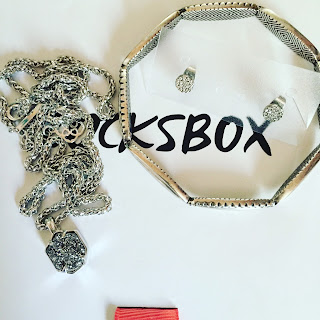 Finally, my latest Rocks Box. The pavé studs were insanely cute–I actually wound up keeping them. The bracelet, on the other hand, arrived missing multiple stones, which further reinforces my suspicion that this jewelry is not of the highest quality.

I finally have a doctor, which is a relief. Now I can get sick without, like, dying in an emergency room.

The rest of the week was pretty low-key on my end. I have two articles about Ireland done so far and I'm shopping for a market for a third, possibly fourth.

Unfortunately, when things get a little slow like that, I get bored. And when I get bored I start thinking about all the stuff I "need," like a record player and records to play on the record player, and a hooded trench coat and new boots. I've been foolishly spending my not-really existent money, is what I'm saying here.

I was too exhausted to do much in the way of blog reading this week. But if you read an awesome post you'd think I'd like, feel free to link to it in the comments.

Oh, and did you know my friend Walker has a podcast where he discusses a whole bunch of geeky, fascinating stuff? You can check it out on iTunes or Podbean.


Have a great week!

Sunday Snapshot is Back from Ireland

I'm baaaaaack! Ireland was awesome. If you like books, history, music, booze, food, and beautiful vistas, then Ireland is the island for you. The trip went by so fast, but in a way it felt a lot longer because of how deep Ireland got under my skin. I'm already craving Guinness and missing going to the pubs. I think I might be addicted to Ireland!

In lieu of my usual Sunday Snapshot format, this week I'm going to share a few pics and trip highlights. 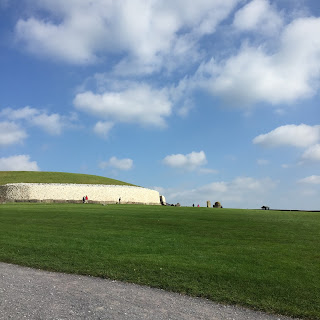 Newgrange, a tomb older than the Pyramids at Giza that's aligned with the solstices. 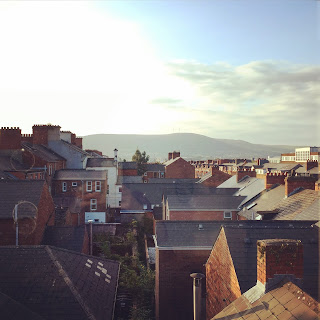 The roofs of Belfast. 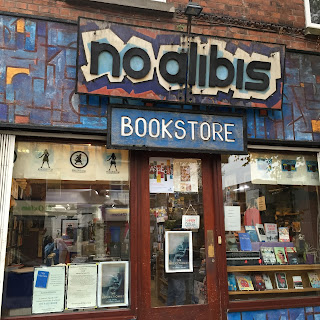 No Alibis, Belfast's (and possibly Ireland's) only crime fiction bookstore. Or so they say. To be honest, I was a little disappointed with the selection, the vast majority of which actually consisted of textbooks for Queen's College. But they gave me a free tote bag and three postcards with my purchase, so it's all good. 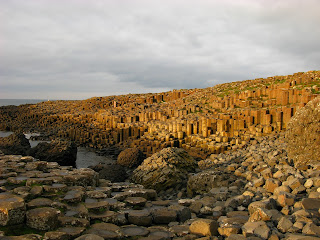 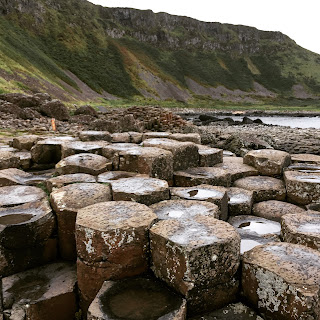 Giant's Causeway. We got there just as the sun was setting! 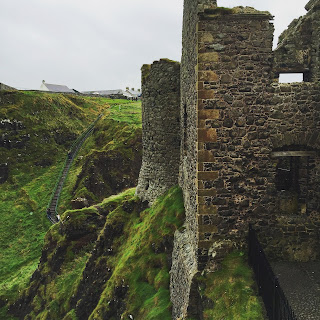 The ruins of Dunluce Castle. 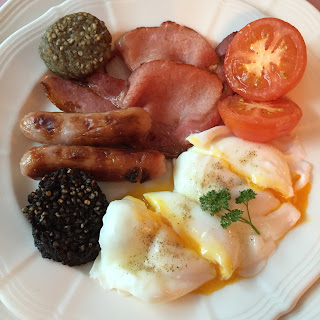 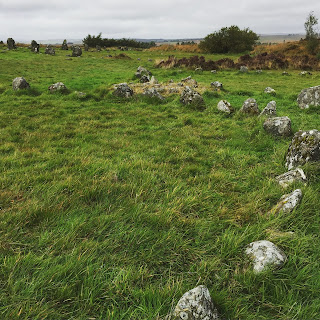 The Beaghmore Stone Circles. I think I've finally got the whole stone circle thing out of my system. Problemaybe. 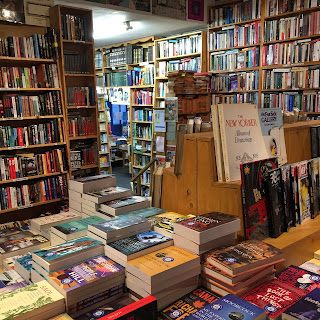 Inside Charlie Byrne's Bookshop, Galway, which is like an Irish version of Powell's Books.

A pub full of craic. Galway has the best pubs. 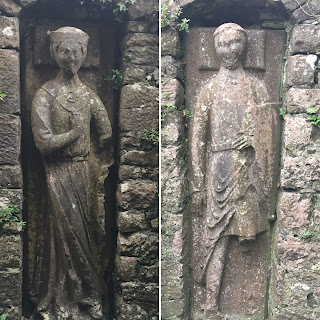 One of the coolest things I encountered on the trip: while the town walls of Cashel were being contructed in the 13th century, a family crypt was uncovered filled with four stone sarcophagi from the 11th-12th centuries. One of the effigies (right) was of a Templar knight with legs crossed and the feet turned inward, meaning he fought in the Crusades. But his sister (left) also has her legs crossed with feet turned inward, so they think she cut her hair to pass as a boy and followed her brother to Holy Land (!). 11th century feminism, ladies and gentlemen. All the effigies in the crypt were inserted into the wall and still frame the original town gates.

Cashel also has the super-awesome Bolton Library, which I'll write about in more depth for Book Riot. It's a must-visit! 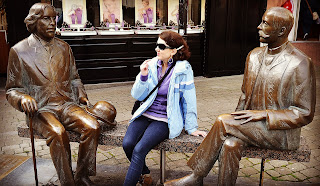 Hangin' with Oscar and Eduard. 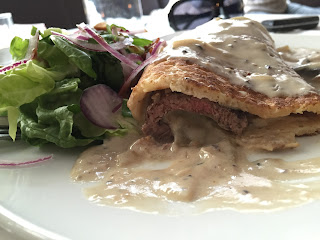 Boxty, which is a potato-based dough used to make fries, pancakes, bread, and dumplings. This dish, Gaelic Boxty, tasted similar to chicken-fried steak with white gravy, for you Americans out there. 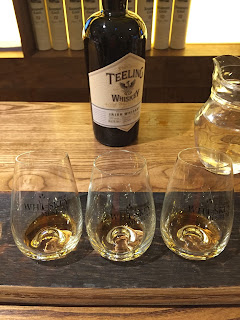 Tasting whiskies at the Irish Whiskey Museum in Dublin. 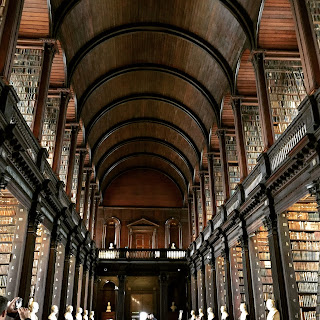 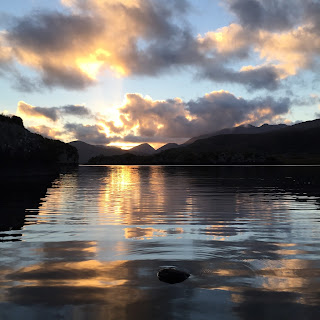 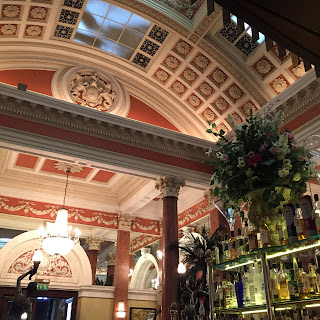 Interior of The Bank on College Green, a good place for lunch and a cocktail bar that receives my seal of approval. 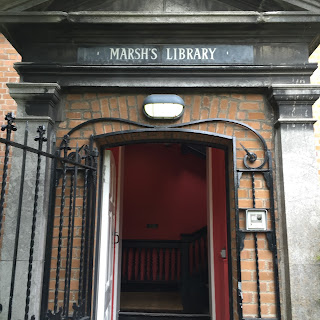 Marsh's Library, a bit off the Dublin tourist track but well worth the walk. Super cool 18th-century public library that's still a working library. Past patrons included James Joyce, Bram Stoker, Jonathan Swift, and there are ton of awesome historical curiosities like cages readers would be locked into so they wouldn't steal the books. I'll be writing more about this library for Book Riot, as well.

That's just a small portion of the stuff we did, but I won't bore you with any more pictures (for now). I'll be back next week with our regularly scheduled programming.

Not much happened after my mid-Readathon update. I was more or less completely derailed after watching Doctor Who. Then I fell asleep because I'm still adjusting to US time and not up to my usual night owl ways.

Anyway, on to the mid-event survey:

Which hour was most daunting for you?

I wasn't daunted by any hour.

Could you list a few high-interest books that you think could keep a Reader engaged for next year?

Yes, The Unfortunate Decisions of Dahlia Moss was PERFECT for the Readathon. Very fast-paced and high energy, and unusual enough to keep me engaged. Imagine The Big Bang Theory with crime and you have a good idea of what this book is like.

How many books did you read?

I read five books but only finished one.

What were the names of the books you read?


Which book did you enjoy most?

Probably a toss up between Darkfever and Unfortunate Decisions.

Which did you enjoy least?

Irish Girl did not do anything for me whatsoever.

If you were a Cheerleader, do you have any advice for next year’s Cheerleaders?

How likely are you to participate in the Read-a-thon again? What role would you be likely to take next time?

I don't know. I felt very isolated during this Readathon. Interacting with other readers/bloggers is my favorite part of the 'Thon and that was next to nonexistent this time around. It definitely wasn't as much fun as previous Readathons have been, not that that's necessarily the Readathon's fault (although I did sign up for cheerleaders and seem to have gotten lost in the spreadsheets).

Hour 12! This has been a very quiet, relaxing Readathon for me so far. How are you guys doing?

1. What are you reading right now?

The Unfortunate Decisions of Dahlia Moss by Max Wirestone. I settled on this one after trying out a few different books that weren't sticking. This one is perfect though: breakneck pace, upbeat and fun.

2. How many books have you read so far?

I've only finished one book so far, but I've dipped into four or five.

3. What book are you most looking forward to for the second half of the Read-a-thon?

I didn't plan out a stack, so I'll pick out another book I'm in the mood for when the time comes.

4. Have you had many interruptions? How did you deal with those?

Not, not really. My mom was going to Readathon with me but she's not feeling good, so she went to Urgent Care instead. That's really been the only hiccup.

5. What surprises you most about the Read-a-thon, so far?

How quiet and relaxed it seems. I think this is the most focused on reading I've ever been during a Readathon! Usually I'm buzzing around doing minichallenges and cheering.


Now back to reading and maybe a snack and beer to tide me over until dinner. See you guys later tonight!

Hey everyone! I know it seems like I'm starting late on the 24 Hour Readathon (and I am), but it's not as late as it seems. I've already finished one book and plan to get in a minichallenge before starting Book 2.

Right now I'm finishing up books I'm in the middle of, but I hope to start a new book and make a serious dent in it later this afternoon.

1) What fine part of the world are you reading from today?

2) Which book in your stack are you most looking forward to?

The one I just finished–Darkfever by KMM.

3) Which snack are you most looking forward to?

Long story, but I didn't prep any snacks this time around. I know.

4) Tell us a little something about yourself!

I just got back from Ireland with a TON of books. Like I had to clear out my bookshelves to make room for them all. I'm hoping to get to at least one today!

The last time I participated I was a cheerleading captain. I feel like I intended to cheer this time but I must have forgot. Anyway, no cheering this time (except I will of course cheer people on on Instagram and Twitter), just reading.