How Not to Die by Dr. Michael Greger: I may never be able to eat chicken again.

I loved Jessica Williams in this, but the romantic comedy plot felt like an afterthought.

Not one of Clint Eastwood's better movies. The start is very slow and meandery, and there's practically no character development, so the detente between Afrikaners and black South Africans comes across as cheesy and pandering. Also, I'm kinda shocked both Freeman and Damon were nominated for Academy Awards on this film, since Freeman's performance was unconvincing and Damon had so little material to work with.

But I did enjoy learning more about South Africa and how Mandela worked to bring the country together after the end of Apartheid. We could all definitely stand to take inspiration from him and his story.

Normally I'm all over the Olympics, but this one was kinda blah. And don't even get me started on how NBC covered figure skating this year. RAGE INDUCING. I almost sent them an angry tweet.

Winter has finally hit SoCO, and I'm already sick of it. Wearing a bunch of clothing is just a bummer, not to mention being stuck indoors all day.

So on the first big snow storm of the year, my mom and I went up to Springs to catch the opening of Art of Haiti: Loas, History, Memory. I became fascinated with Haitian history and art when I was a freshman in college and was assigned to do a presentation on it, so I was pretty pumped about seeing some Haitian art up close and personal.

The exhibit was okay. It wasn't what I was expecting at all, and it wasn't very well organized or interpreted. But it did have some really cool pieces. Here are a few of my favorites:


In other news, I'm getting ready/nervous for my trip to Paris in close to a month! I still haven't reserved the cooking classes or tours I was looking at, nor have I figured out on which days I want to do what, so I feel completely unprepared. That usually means I end up creating a spreadsheet. The night is still young.

Oh, one more thing: I gave up meat for Lent. I was on the fence about it up until the last minute, because I knew it would be difficult, but I decided to just go for it. I never realized how many calories I got from meat until I stopped eating it. By the third day I was STARVING. I'm better now, but I have to eat a lot more to stay full on this diet. Don't become a vegetarian if you don't like to eat, like, all the time. That's my advice.


Hope you all had an excellent Valentine's Day and that next week is full of fantastic things for you! 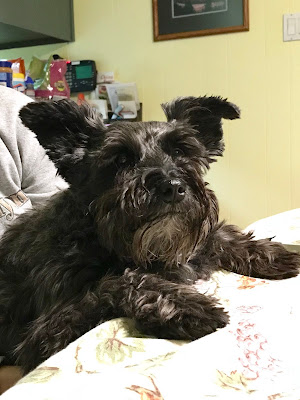 Hey y'all! Long time no type.

My current reads are making me pretty grouchy.

Death Below Stairs by Jennifer Ashley: I get that the narrator's a cook, but I don't need to know every goddamn ingredient for every goddamn meal and how she makes it and then cleans up afterwards. GET ON WITH THE STORY.

Mystery Loves Company by Sheri Cobb South: Tbh, if this wasn't a John Pickett mystery, I would have DNF'd it a long time ago. It's like watching paint dry.

If you have any recs for good audiobooks I can download, feel free to hit me up.

It's over now, but next year you can be sure to celebrate the poet Robert Burns with the greatest literary holiday in the western world, Burns Night!

This is a really weird movie. But I mean that in a good way, like I can't believe it was actually made but it gives me hope for Hollywood that it was. Imagine a cross between Mary Poppins and Pulp Fiction and you have the basic vibe of this film. Holmes plays a charmingly odd schoolteacher who carries a gun in her handbag and isn't afraid to use it against the Harvey Weinsteins of the world. I could have done without the whole mother twist, but if you like dark comedies à la Pushing Daisies and Dead Like Me, you'll enjoy this one.

A surprisingly forgettable film, considering the talents of the cast. I thought Grant did a particularly excellent job–this might be the best performance of his career–but what the eff do I care about him and his piece on the side? The movie's called Florence Foster Jenkins, guys, maybe focus more on that.

By now there surely must be a subgenre of film called Liam Neeson Shouts Into a Phone. Anyway, if you've seen any of the movies he's done since 2008 you know exactly what you're getting here, and it's not one of the best of the bunch. But it's okay.

Yet another cheerful western /sarcasm. I found myself thinking several times during this movie that this is why people don't watch westerns anymore. A cavalry captain is given his last assignment, escorting a Cheyenne chief to his homeland in Montana so he can see it one last time before he dies. Along the way, EVERY SINGLE WESTERN THING HAPPENS. Not surprisingly, the movie's overly long, with a ton of unnecessary exposition, no comic relief whatsoever, and the treatment of the race relations between whites and Indians feels the opposite of woke. I got excited when I saw Ben Foster (where you know him from: he played the bespoke psychopath Charlie Prince in 3:10 to Yuma), but he was completely underutilized and his storyline was pointless. I also wanted Pike to be a way more crazy. Idk, this script just needed a lot more focus.

By the way, I started keeping track of my movies on Letterboxd if you want to follow me on there. My user name is heidenkind.

How is 2018 treating all y'all so far? I have not yet saved enough for Paris, but I think I'm making good headway on eating more plants. Other than that, there's not a lot of news to relate. My favorite holiday, Valentine's Day, is coming up. If you want me to send you a Valentine shoot me your addy by email or on social media.

The "Big Game" is on today (we're not allowed to say Super Bowl anymore, I'm not sure why. Do they not want people to talk about their event?) and naturally I have food planned. I want to make grilled nachos (I can't find the specific recipe I picked out for some reason, but there are a ton of them on Google) and margaritas, and possibly steak with veggies for dinner. Or just pizza. We'll see.

This skit on Saturday Night Live about how the Patriots annoy everyone not from Boston made me lol:


Have a great week everyone!