Two Gabriel Allon Novels by Daniel Silva: THE HEIST and PRINCE OF FIRE

As most of you probably know by now, I'm a big fan of Daniel Silva's work. It all started with 2013's The English Girl, one of the best thrillers I've ever read. After finishing that novel, I decided to dig into Silva's backlist and, unintentionally, started reading the Gabriel Allon series backward. But recently I broke with that trend and skipped both ahead and backward, reading Silva's latest—The Heist—and 2006's Prince of Fire practically back-to-back.

Unfortunately I wasn't terribly impressed with either of them.

For those of you who aren't familiar, Silva's series follows the adventures and misadventures of Gabriel Allon, the greatest spy of all the times. Born to a Holocaust survivor, Allon was recruited by the Mossad after the 1972 Olympic Games in Munich. His job: hunt down the members of Black September and assassinate them. Allon, who originally wanted to be an artist, couldn't paint original pieces afterward and instead became an art restorer—an art restorer frequently called in by the Mossad to take care of shit-head terrorists because HE'S THE ONLY SPY IN ISRAEL. Or something. 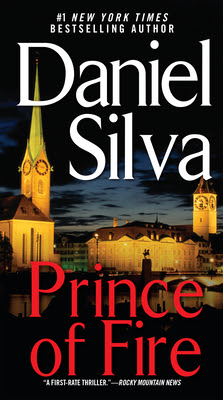 In Prince of Fire, Allon is restoring an important altarpiece in Venice, when he's called back to Israel. His information has been leaked, possibly to the son of one of the Black September men he assassinated. Even worse, the man gunning for Gabriel has figured out where his wife, Leah, is hidden.

Bridget from Portable Pieces of Thoughts told me I should read Prince of Fire next, and I can kind of see why. This is the book where Allon's core team is formed, and so far the only one I've read where Leah plays a big role in the action. Honestly, the way Leah is treated in this book infuriated me. See, Leah keeps reliving the same day—the day her and Gabriel's son died in a car bomb explosion—over and over. Why? Maybe it's because she's hopped up on meds and doesn't do anything but stare out an asylum window all day, who knows! Meanwhile, Gabriel is cavorting with his nubile young lover, Chiara, half a continent away in Venice. Channeling Mr. Rochester much there, buddy?

That's bad enough, but then Leah actually leaves the asylum for a while. And she actually starts getting better! Imagine that. Like, she starts interacting with her world some more and pulling herself out of her fugue states. At least until Gabriel gets ahold of her and sticks her back in another asylum. This is one kidnapping where I was rooting for the bad guys to get away with it.

And don't even get me started on Chiara, who is beyond annoying in this book. If the guy you're in love with is 1. married, 2. promised to marry you, and yet still 3. isn't divorcing his first wife, then there's a problem. The fact that Gabriel pulled the "Leah needs me right now," card quite frankly boggles my mind. At least Chiara left him, although I could have done without the tearful goodbye and Gabriel's attitude of self-sacrificing nobility.

After finishing Prince of Fire, I resolved to not dig into Silva's backlist any farther, except maybe to read the first Gabriel Allon novel. The books are just getting to be too annoying.

I was, however, still really looking forward to reading Silva's latest release, The Heist. Silva's novels have gotten progressively better over time, so if the trend continued The Heist was shaping up to be completely amazeballs.

Obviously my expectations were really high. Too high. 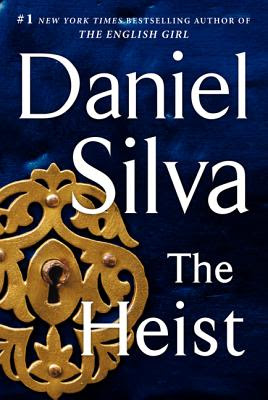 In The Heist, Gabriel is back in Venice, once again restoring something. Art restorers gonna restore. He's waiting for Chiara to give birth and for Uzi's term as Boss Guy of Israeli Intelligence (I don't know the official name) to end so that he can take over. It's like a mini-vacation, if you will. And then the Boss Guy of the Carabinieri Art Squad (again, don't know the official name, but you get the idea) shows up and "asks" Gabriel to look into the mysterious death of an art collector. Gabriel can't get one moment to himself, I tell ye, NOT ONE MOMENT.

Anywho, after walking around the crime scene for, like, thirty seconds, Gabriel figures out Fancy Art Collector Guy (again, not the official title) was actually and very unsurprisingly Stolen Art Smuggler Guy. And the game is afoot. Will this all tie into a Middle-East terrorist plot to blow something up? This is a Gabriel Allon novel, soooooooo: probably, yes.

The Heist wasn't a bad novel by any means, but so much of it felt like a retread. The use-an-art-smuggling-ring-to-find-terrorists element was extremely reminiscent of the same device Silva employed in The Fallen Angel. Gabriel uses a Muslim woman to gain access to terrorist bank accounts, just like he did in Portrait of a Spy, and said woman is kidnapped, just like she was in Portrait of a Spy (running tally of women kidnapped in this series so far: 4). Even minor characters from The English Girl make a reappearance. And yes, I did like those characters in The English Girl, but there's no reason for them to be in The Heist. Like Christopher Keller literally has nothing to do; I kind of even forgot he was there.

To be fair, I thought Silva executed all these elements more skillfully in The Heist than he did in his previous novels, but it felt a tad phoned in. The Heist had no anima, no oomph. Bridget told me that Silva had trouble finishing the book and only did so because of pressure from his publisher, which if true would explain a lot. Even with the lack of inspiration, however, Silva is still on top of current politics in the region, and what he has to say is still extraordinarily relevant. It's just not terribly new.

The Heist is a novel where the main character is waiting—waiting for his new life as a father and Intelligence Director Guy (I should really look these titles up) to begin and his old life as Broody Super Secret Agent Man to end. Accordingly, it feels like the author is waiting, too. Hopefully whatever Silva is waiting for will happen between now and his next book.