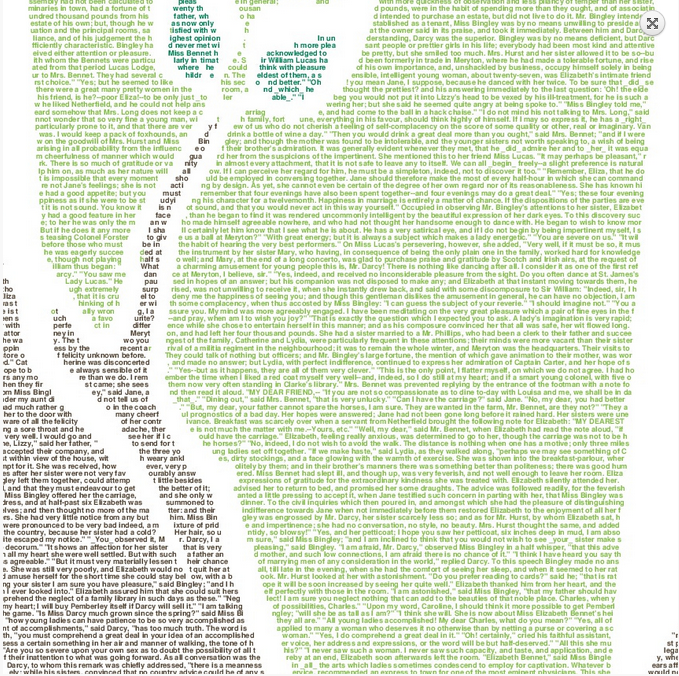 I enjoy bookish swag as much as the next person, so when Brad Wirz from Gone Reading offered to let me try some of their products and host a giveaway for a lucky reader of this blog, I was definitely in.

Basically, Gone Reading is a retail website that sells every kind of book-related item you can imagine, from t-shirts to journals, to those posters made from the text of a book. Even better, Gone Reading donates 100% of its profits after taxes to literacy charities like READ Global and Ethiopia Reads. Everybody wins! 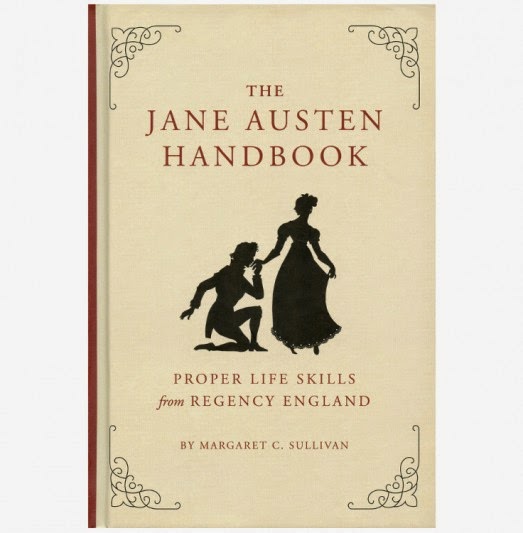 So what did I get from Gone Reading? As some of you might know, on occasion I ask myself what would Jane Austen do, so I requested The Jane Austen Handbook, which claims to tell me what Jane Austen WOULD do, although not in as esoteric a sense as I usually imagine (and considering how gorgeously bound the book is, it was actually very reasonably priced). 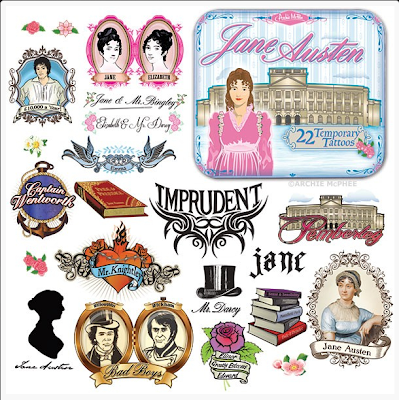 I also got a collection of Jane Austen temporary tattoos because I couldn't help myself. I can finally realize my lifelong dream of tattooing Colin Firth's face on my butt.

Some other nifty items on Gone Reading I was tempted by: a Shakespeare finger puppet theater set, an Edgar Allan Poe bobblehead doll, Shakespearean insult bandages (basically band-aids with insults on them), a personal library kit (I know I'd probably never use it, but it's still pretty cool), and a book text poster of Pride & Prejudice.

So, as mentioned earlier, Brad is offering one lucky reader of this blog a $25 gift card to Gone Reading! To enter, just comment here with the item you'd buy if you won the lottery (the lottery to win the gift card, not the Powerball or anything... although, hey, if you want that much stuff go for it). If you can't comment because Disqus is being stupid, shoot me a tweet @heidenkind with the hashtag #gonereadinggiveaway. For my readers who don't live in the US, make sure Gone Reading ships to your respective countries here before you enter.

This giveaway will run from August 15th-22nd. I will choose the winner using random.org and notify them by replying to either the winning tweet or comment, so be sure to follow the comment thread here! If I don't hear back from the winner within three days of the announcement, a new winner will be chosen.

Good luck to all!

Jade makes her living as a Dublin street performer and symphony bartender. After a one-night stand with the symphony's new violinist, Jade and Shane start falling in love, despite the fact that Jade made it clear she was not interested in being anything other than friends. Because reasons. Will Shane be able to convince her to change her mind?

Last year I read and enjoyed LH Cosway's Painted Faces (you know, the book with the drag queen hero), so when I saw Still Life with Strings on sale, I was more than willing to download it. On the surface Still Life with Strings sounds more conventional than Painted Faces—the hero is a musician, and the heroine *is* a street performer, but it's more of a hobby than a full time job. However, I'd go so far as to say that in their own ways Shane and Jade are more unique, and more fully-realized, than Freda and Nicholas from Painted Faces, with a lot more chemistry and a more believable relationship arc. I stayed up until 5 in the morning reading this novel—on a work night, no less—and as much as I enjoyed Painted Faces, I think Still Life with Strings is 1000x better. You all should definitely give it a try.

First of all, the characters. Both Shane and Jade are different and isolated in their own ways, the reasons for which we discover gradually over the course of the novel. Jade's had a hard life, but she maintains her sense of humor and balance through "street performing" as a living statue. I've always wondered why someone would do that, and Cosway makes it sound surprisingly fun and creative. As for Shane, he's definitely an odd one—which actually fits in well with what I know about musicians—and I loved that he spends a good deal of time during the course of the book playing music, writing music, and talking about music. Unlike in some romance novels I could name (coughLickcough), the fact that he's a musician isn't just a hook. It's a part of his character and central to the story.

And speaking of music, the way Cosway incorporates it into Still Life with Strings is brilliantly done. It's not easy to write about music in a way that's unique and interesting, and SHOWS us its importance and effect on the characters, but Cosway does it through imagery and Jade's imaginings, and it totally works.

Still Life with Strings DOES contain several of my least favorite romance tropes: first of all, one night stands that turn into true lurv. So entirely likely, not. However, in this case I found it believable. The trope I had the most problem with was the one where the heroine refuses to start a relationship with the hero just to drag the book out, then changes her mind and says they can be fuck buddies but they won't be "in a relationship." Yeah, it kind of made me roll my eyes a bit, as did the fact that Shane's like, "Sure, we can just be friends. Whatever you want." And then immediately starts hitting on Jade again because HE CAN'T HELP IT. But it was more well-done than in It Happened One Wedding—I mean, there *are* reasons why Jade doesn't want to be in a relationship that apply to every guy out there, not just Shane. Not entirely logical reasons, mind you, but reasons. I also liked the fact that even though Jade was hesitant to get into a relationship with Shane, she was still sexually aggressive and confident. And honestly, Shane and Jade had so much chemistry I was willing forgive the occasional lapse into probably-would-never-happen town.

Another thing that I found kiiiiind of ridiculous and annoying were Shane and Jade's awkward Facebook chats/texts. UHG PEOPLE. I don't want to read pages and pages of characters texting, messaging, or emailing unless it's 1. necessary, and 2. interesting. Okay? Like those things aren't tedious enough in real life (and incidentally, my social media discussions are usually way more interesting than Shane and Jade's).

But aside from that, Still Life with Strings was a really creative and different romance. There are a lot of things going on in this book—mystery, magical realism, Dublin's indie art scene, both Shane and Jade's messy and complicated personal lives, music, class conflict—but it all comes together without one element overwhelming the others. I might have enjoyed Painted Faces, but Still Life with Strings has turned me into a LH Cosway fan.

It's probably not totally obvious, but I am a huge Bryan Lee O'Malley fan. I loved his first graphic novel stand-alone, Lost At Sea, and I think Scott Pilgrim might have ruined me for all other graphic novel series. It was that amazeballs. So to say I was looking forward to Seconds would be putting it mildly—I've been wound up like a spring waiting for O'Malley's next project for YEARS.

Was it worth the wait? Well...

The start of the comic is actually pretty strong. The main character, Katie, is the head chef at a hip restaurant named Seconds. She's the queen bee of the place, but she wants more. To that end, she's opening another restaurant across the river, creatively named Katie's. However, the old building is a money pit and renovations are dragging on and on and on, so in the meantime Katie's stuck at Seconds.

Katie isn't the best person. She's selfish, oblivious to the people around her and their feelings, and like many people who work in top kitchens (I'm guessing, based on all the reality TV chef shows I watch), she's a ball buster. But O'Malley manages to make her sympathetic, especially when she uses the mushroom a house elf gives her to rewind time and save a shy waitress from a serious kitchen accident.

Of course, once Katie finds the elf's stash of mushrooms, she uses them to rewind time and erase really stupid stuff like staying up all night watching Breaking Bad on Netflix. Would any of us do any different? Probably, because I'm assuming y'all aren't assholes. But I think we can all understand the temptation, despite the fact that Katie's constant rewinding is obviously going to fuck up the space-time continuum.

Here's the thing with Seconds: it's good, because it's by Bryan Lee O'Malley. But it's not as good as either Scott Pilgrim or Lost At Sea. O'Malley's strength—aside from his visual style, which is slightly muted here but still evident—lies in creating characters that are at once really quirky and yet totally identifiable. As I said in my review of Lost at Sea, I KNOW these people. That's not the case in Seconds. Katie's well-drawn(ish), but the secondary characters? Not so much. I was particularly annoyed with the whole love triangle between Max, Katie's cool ex, and Andrew, the chef she trained to take over for her at Seconds. What either of these bozos see in Katie, or vice versa, I have noooo idea. Their personalities, if one could call them that, were interchangeable, and Katie didn't seem to think of either of them as more than convenient bed partners. I didn't care which guy she wound up with because it didn't really matter, and I was kind of irritated she did settle with one of them by the end of the book.

The story also starts getting really boring and repetitive about 2/3rds of the way through the comic, especially since the solution to the whole problem seems really obvious. Everything is fixed too easily, with too little consequences, and as a result the themes of Seconds—responsibility, patience, growing up—aren't effectively fleshed out.

There's also nothing original in Seconds like there was in Lost at Sea and Scott Pilgrim. It's very self-referential, which COULD be amusing, but turned out to be annoying instead. Just because a joke worked—and brilliantly—in Scott Pilgrim doesn't mean it will work here. There's not enough distance between the two comics that fans of O'Malley will pat themselves on the back for remembering the reference, which is really the only reason to insert jokes like this:


Keep in mind that I'm being hyper-critical here because I expect a lot out of O'Malley, and for good reason. Seconds is by no means a terrible comic. But does it stand up to O'Malley's previous works? In my opinion, no. If you're starting out with O'Malley, I wouldn't recommend Seconds; and if you're already a fan, you probably already bought it anyway. I just hope O'Malley can shake off whatever malaise he's got himself mired in and give us something with more energy and a more developed storyline for his next project.