Happy 2021 everyone! Although the start of this year has been pretty rough, to put it mildly. But luckily we still have the blogs.
Currently reading:

The Secret Chapter by Genevieve Cogman: Another book the Invisible Library series. Tbh it's taking me forever to read, but that's not unusual.

Depth of Winter by Craig Johnson: I'll be honest, when Cady was kidnapped by the cartel at the end of The Western Star, I rolled my eyes HARD. But the setting of this book (Mexico) is actually working out pretty well.
Movies:

Promising Young Woman, starring Carey Mulligan
I HIGHLY recommend this movie. It's a revenge tale about woman whose hobby is going to bars and pretending to be falling-down drunk. Inevitably some guy offers to "help get her home" but winds up taking her back to his place and trying to sleep with her instead. The end game isn't what you think. Unlike the typical revenge movie, this one is smart, snarky, with a genuine emotional core. And the more I think about it, the more I consider it reflective of our current times. All Cassie (played by Carey Mulligan who knocks it out of the park, as usual) wants is for people to acknowledge the reality of what happened, something that proves surprisingly–or maybe just depressingly–difficult.

Another Round, starring Mads Mikkelsen
Four high school teachers decide to drink constantly in order to keep their blood alcohol level at .5%, "But only during working hours, like Hemingway." What could go wrong?!
This isn't a movie about drinking so much as about mid-life crises and depression. Mads Mikkelsen's character, Martin, is so checked out at the beginning of the film his students stage an intervention. Then through drinking he rediscovers the energy and carefree fun of youth. Of course, there is a downside to this Jekyll/Hyde transformation, which the movie covers. But more ambiguously than you might expect.
Worth watching.

Mulan, starring Yifei Liu
I normally avoid Disney's live action remakes, because why ruin my childhood with this unnecessary nonsense (actually, that's not true, I've SEEN all of them, I just went into it with a certain attitude that I'm sure you can surmise). But with Mulan I was actually like, "Okay, this might be good," because 1. the cartoon didn't have magic or singing mice; and 2. I wasn't really into the original anyway.
Whelp, I was wrong, Disney continues to ruin my childhood. First of all, removing the music was a terrible choice. Even my brother was like, "The hell." Secondly, why would you make a live action remake that's less historically accurate than the cartoon it was based on? Idk people, it just felt like the heart of the original film was ripped out.

The Prom, starring Meryl Streep and James Corden
"But would it play in Peoria?" Answer: No.
The problem with this musical is you go into it thinking it’s going to be about a high school student, but it winds up being about a bunch of uninteresting Broadway actors nobody cares about. And then Auntie Mame, or whoever Meryl Streep is channeling in this role, gives up her career for a high school principal, which doesn’t make a lick of sense.
And yes, James Corden is as annoying in this film as everyone says. The American accent is not great.
This year in heidenkindom: 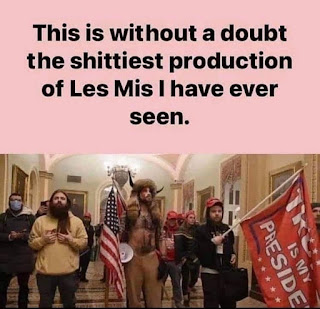 Well, 2021 is off to... a start. Only 3 more days. Fingers crossed.
The holidays were actually pretty nice. I was worried with the pandemic Christmas would be a total bummer, but it turned out to be cozy and less stressful than usual. We had our office Christmas party over Zoom and it was a definite improvement because 1. It lasted EXACTLY one hour; 2. I didn't have to pay for a meal at a restaurant I never wanted to go to in the first place; and 3. I didn't have to wrap a stupid white elephant present. Yay!
I also had two whole weeks off from the university, which provided a mental break I definitely needed. Maybe not enough of a mental break, but a break.
As for my 2021 goals, I have an appointment to look at a condo tomorrow. The HOA fees seem pretty high, they don't allow dogs (this could be a deal breaker tbh), and I kinda had my heart set on a house, but I do want to start looking at places to see what my options are.
That's all the news that's fit to print for January so far. How has your New Year been going?
at 5:19 PM