A painting is a symbol for the universe. Inside it,
each piece relates to the other. Each piece is only answerable to the
rest of that little world. So, probably in the total universe, there is
that kind of total harmony, but we get only little tastes of it.
~Corita Kent 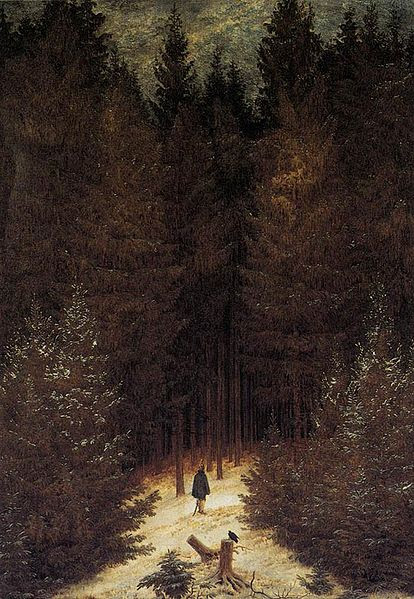 The Chasseur in the Forest by Caspar David Friedrich

From Booking Through Thursday:

My husband is not an avid reader, and he used to get very frustrated in college when teachers would insist discussing symbolism in a literary work when there didn’t seem to him to be any. He felt that writers often just wrote the story for the story’s sake and other people read symbolism into it.

It does seem like modern fiction just “tells the story” without much symbolism. Is symbolism an older literary device, like excessive description, that is not used much any more? Do you think there was as much symbolism as English teachers seemed to think? What are some examples of symbolism from your reading?

First of, your husband isn't an avid reader? How does he live? (LOL--kidding) I definitely believe that writers in the past--and the not-too-distant one, at that--used symbolism deliberately in their novels all the time. That was the style, not just in writing but in the visual arts as well. For example, Caspar David Friedrich is probably the most well-known German Romantic painter. He painted what most people today think of as "pretty landscapes," but his paintings were more than just scenic views. They were full of symbolism, expressing Friedrich's religous, philosophic, and political viewpoints. A Chasseur in the Forest is a painting that's all about the Napoleonic Wars and the expulsion of French troops from Germany. The lone figure is a French dragoon lost in the impenetrable forest, which symbolizes Germany. His ultimate fate (and the fate of the French army), death, is represented by the black crow on the tree stump--a symbol often used by Friedrich for death. Other symbols Friedrich regularly employed were colors to represent God or theological ideas, ships to represent human souls, and ruined churches to represent death (Friedrich was kind of obsessed with the whole death thing). 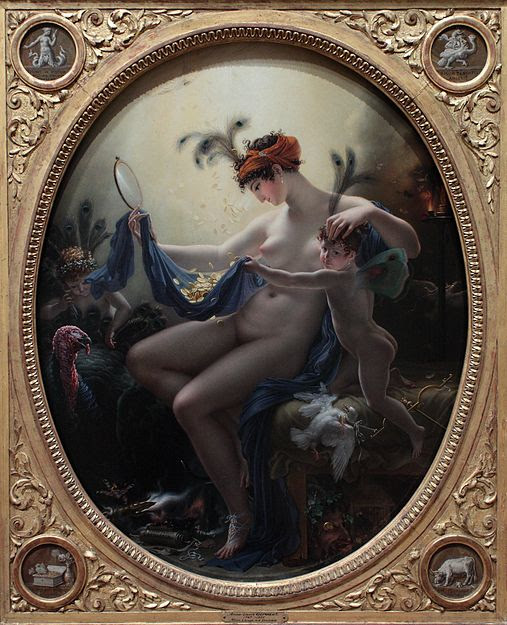 Friedrich wasn't the only artist to use symbolism in his work, and symbols weren't used to only represent religious concepts. When the newly-married courtesan Mademoiselle Lange didn't like the portrait Girodet painted of her, he replaced it and hung a painting of her as Danae in the Paris Salon, instead. Danae is a mythological figure often used in allegorical paintings depicting courtesans, because Jupiter lured her into making love to him by appearing in the form of a shower of gold coins (don't ask me how that works, it's just the story). In this painting, Girodet was not just implying that Mlle. Lange was a prostitute, selling herself for the gold owned by her rich (and old) husband, but that she was cuckolding him (see the huge cock on the left staring at Mlle Lange's genitals?) with a young and handsome actor--you can see his portrait in the Bacchanalian head underneath Danae's seat, with gold coins stuck in his eyes. There are loads of other symbols in this painting, all of which were immediately apparent to the Parisian public, and all of which were completely insulting to Mlle Lange, her husband, and her luvah.

How could all these symbols, which seem relatively obscure to us today, be readily apparent to people at the time? Because viewers in the 19th century were trained to read the symbols in painting, just as I'm sure they were trained to recognize them in literature. Now, I have been known to say that art historians make stuff up, I admit; but by that I mean that some of our educated speculation is backed up by less proof than other theories. I don't know much about literary theory, but I imagine it's the same way. English teachers don't just pull this stuff out of their ass; they rely on things like letters, contemporary criticism, rough drafts, and so on to give them clues as to what the writer intended when he or she wrote the work. Sometimes, admittedly, they take this a bit farther than hard, irrefutable proof would support; but that's the fun of it. If I wanted to justify my every idea with irrefutable proof, I'd become an archaeologist. Or a police... person.

Most people today, however, are not trained to recognize symbols (unless they're part of a completely anachronistic profession like me :P). That doesn't mean that modern literature still doesn't use symbols--Animal Farm is obviously not just a story about animals that live on a farm, and The Great Gatsby isn't so much a novel with a traditional story as it is an allegory or modern American myth. Both books are full of symbols, like the T. J. Eckleburg billboard that symbolizes the eyes of God looking into Tom's soul.

However, the proliferation of symbolism in literature--and really all the arts--is only a fraction of what it used to be. Why? Because we no longer view the world in a symbolic way. We don't see spirituality in nature as Ralph Waldo Emmerson did, God in the power of Niaga Falls as Thomas Cole did, or think witchcraft causes bad dreams. Our world today is one of realities (so-called) and science and facts, not of symbols, signs, and mystery; and neither, for the most part, is our literature. Perhaps it's anachronistic to force people to continue thinking in those terms when they study art or literature, but that is the way the people who created those works understood the world they lived in.