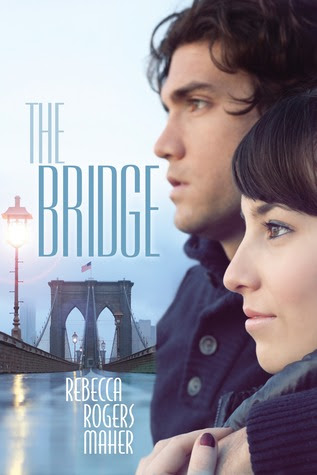 His erection still stands! (Does anyone besides me get that reference? Moving on...)

It's 4 a.m. and Henry's on the Brooklyn Bridge. After years of struggling with depression, he plans to commit suicide. But when he gets to the top of the New York-side tower, he finds someone's already there: Christa, who's just been diagnosed with breast cancer for the second time. Although neither of them want to keep on living, they don't want someone else to die, either; so they make a pact to give one another each 24 hours to convince the other person to live. IT'S THE PERFECT PLAN that doesn't make sense. Will these two lonely kids save each other?

Suicide romance, you guys! As soon as I saw The Bridge reviewed at Dear Author, I knew I wanted to read it. The premise is crazy-unusual; so crazy I figured it just might work. And it does, x1000. I loved the hell out of this novel and would recommend it to anyone who enjoys a good love story.

Now, I know what you're thinking (because it's what Colette from A Buckeye Girl Reads said to me when I told her she should read this): A cancer patient and chronic depressive who want to kill themselves? Sounds depressing! It's not. First of all—spoiler alert!—they don't end up committing suicide. The Bridge isn't about death and depression, but about life and forming connections with other people. "The bridge" isn't just the scene of their first meeting, but a metaphor for the choices the characters make during the course of the book: to stop being scared, to accept the possibility of pain and rejection, to let other people in. A romance novel with a literary metaphor! Crazy, right?

Even without the metaphor and overarching themes, The Bridge is a compelling story that had me from the "meet cute" scene (I feel a bit wrong using that term for it considering the circumstances, but hey). You know from the outset Christa and Henry are going to convince each other life's worth living, but you don't know how, or why they decided to end it. And you want to find out, because The Bridge immediately sets up a paradigm where a person's public identity and inner life doesn't match up. For example, from the outside Henry looks like a guy who has everything: he's from a wealthy family, makes a ton of money at his job, has the posh apartment, the car, the closet full of Armani, is good-looking; yet he wants to die while homeless people who live in cardboard boxes don't. Why? It's curious. The book definitely takes the view that you can never know what another person is thinking, and because of that you can't judge another person's life.

Finally, I loved the main characters, especially Henry. They were both incredibly sympathetic even though they each have some serious problems and make some very selfish decisions. As someone who has struggled with depression off and on since middle school, a lot of Henry's statements really resonated with me. He's also a super-sensitive, sweet, empathetic guy. Disliking him would be like saying you don't like puppies. I didn't feel like Christa's character was as strongly fleshed-out, but I couldn't blame her for being angry and bitter and scared, all things considered.

I'm not going to say The Bridge was absolutely perfect—I was a bit bothered by the fact that it's the bazillionth gajillionth romance novel with a hero who has more money than he knows what to do with and a heroine who's barely scraping by. Why couldn't Christa have been the rich person in this scenario? The musical references in the book were also really annoying and threw me out of the story every time. They were all songs from the '70s that were very literally about loneliness, blah blah blah. This would be bad enough if the characters didn't call them horrible and cheesy when the songs were mentioned, but they do and it's aggravating, especially in one scene where a homeless vet sings "Desperado" on a subway train. First of all, don't shit on the Eagles; and second of all, yeah, that song seems ridiculous IN THE CONTEXT OF THIS BOOK. It doesn't belong, so why is it there (this, incidentally, is the reason why song mentions in books tend to bother me).

Other than that, though, The Bridge was awesome. It's a completely satisfying read that's full of hope and optimism and even faith, though not of the religious kind. I'm glad I took a chance on it and look forward to reading Rebecca Rogers Maher's other novels in the future.