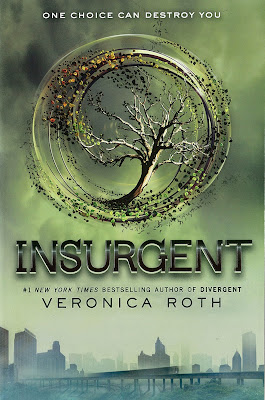 After turning off and stealing the simulation that was forcing members of Dauntless to kill Abnegation, Four and Tris leave Chicago to escape the Erudite. But with Jeanine still alive and determined to control all the factions, they're quickly drawn back into the city, where Marcus wants to unveil the secret Jeanine was ready to kill for. Will he convince Tris she needs to risk everything to help him?

If that summary made a lick of sense to you, congratulations, you've likely read Divergent! (I know I should probably review these books in, like, order or something, but hey. It's my blog, I do what I want.) I immediately downloaded Insurgent after finishing Divergent, because hellloooooooo, I loved it. Divergent, that is. Insurgent was a bit of a letdown.

First of all, Four. In Divergent he was a total hottie, but in Insurgent there was no chemistry between him and Tris WHAT. SO. EVER. Their makeout sessions read like a microwave instruction manual. And I got sick of his constant whining pretty damn fast. Waaaah, you never tell me every single damn thing that's going on with you right away, waaaaaaahhhh. By the time the storming of the Erudite compound rolled around, I was rooting for them to break up.

The ending in particular was SUPER annoying because there were several things that did not make sense:

Not to mention the fact that by the end, I wanted Four to throw himself off a cliff. Let's break down Worst Boyfriend of the Year's actions a bit, shall we?

I want at least one scene of abject apologies and groveling. To the level that it's so pathetic, it's embarrassing.

Not to mention the fact that the writing style in Insurgent read VERY YA. Like Harriet the Spy. The number of conversations Tris eavesdropped on was ridic.

So yeah. I found this book to be EXTREMELY annoying. But I will say Veronica Roth can still spin a fast-moving story, even when it makes no sense.