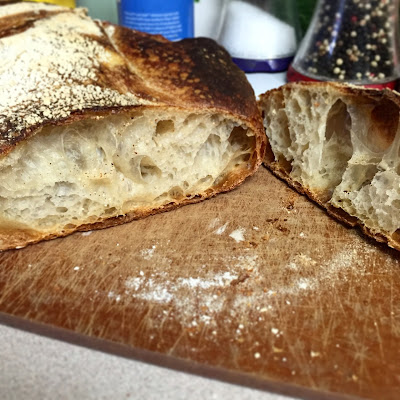 One of the things I learned from the Netflix series Cooked is that bread was not originally made with little packets of dried up yeast you buy in a grocery store and mix with warm water. I know, DUH. I may have wondered what people did before yeast packets, but I didn't wonder hard enough to look it up.

Anyway, before handy dandy little yeast packets, people made bread with starter–basically water and flower allowed to sit until yeast and bacteria started to grow. A little of the starter was then used to leaven, or puff up, the bread.

Why is this important? Because starter leavens bread more slowly than commercial yeast, giving the glutens in bread time to ferment and break down. Some think that the reason so many people have problems with gluten now is because commercial yeast doesn't break it down enough to be easily digestible.

Before watching Cooked, I had been thinking about getting back into the bread baking game, for the simple reason that the closest place to buy decent bread around here is an hour's drive away. However, I wasn't sure I could call my previous adventures in bread baking "decent." While they were mostly edible, the loaves of bread I made were invariably salty and dense, with a clump of dough in the middle that was honestly fairly unappetizing. Add to that the fact that I'd have to: 1. go to the grocery store and buy yeast; and 2. dig my pizza stone out of storage, and surprise surprise I never got around to baking bread.

BUT. Making bread from starter doesn't require buying yeast, or any other special ingredients. And it's healthier for you! So I decided to try making completely all-natural bread with starter. 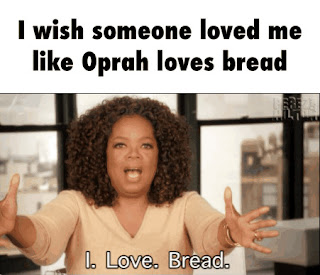 I bought sourdough culture from Cultures for Health via Amazon (about $13 for one packet–a bargain when you consider that, if you take care of your starter, you'll never have to buy another culture again), but you can skip this step and just use flour and water.

The Cultures for Health starter came with directions for both activating the starter and baking sourdough, but they were a little confusing, so I was not feeling confident when it came time to bake my bread. I eventually decided to go with this recipe from The Kitchn, because it said I could just use a colander and not have to buy a proofing basket.

The Kitchn's recipe is much more complicated than the one from Cultures for Health. It's not difficult in terms of technicality or physicality, but it is time consuming. I basically felt like I was babysitting this bread dough for two days. If you do decide to go with this recipe, make sure you have two whole days blocked off for it, because you will need it.

That said, as a reward I got the best loaf of bread I had ever baked in my life! It tasted like something a legit professional baker had made. The crust was crispy as all get out, the dough was super holey and spongy, but not too wet (although maybe a little wetter than it should have been–I erred on the side of damp dough since I live at high altitudes), and the flavor was superb.

So, the tl;dr version:

Pluses of making bread with starter

Minuses of making bread with starter

Conclusion
At the end of this process/experiment, do I think making bread this way is worth it? YES! However, given the energy required, it's not for everyone. I have the luxury of working from home most days, so it's not that hard for me to pop into the kitchen every thirty minutes to stretch dough. Even given that I probably won't bake bread any more frequently than once a week.

People who bake bread at home do it more as a hobby, out of a love for baking, than for economical reasons. If you're one of those people, I would definitely recommend looking into getting your own starter. There's certainly a learning curve, but it will improve your bread baking game by 1000%. 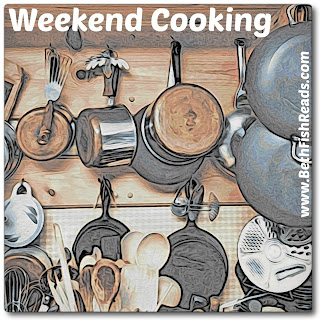 Weekend Cooking is a weekly meme hosted by Beth Fish Reads. To learn more and find links to other recipes and foodie posts, click here.