Danger In a Red Dress 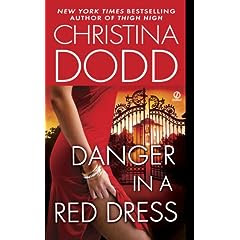 This book was terrible.

Christina Dodd is one of my favorite authors and one of most popular writers in romance. Her nickname in Romancelandia is "La Dodd"--that's how huge she is. I remember the first time I opened my first Christina Dodd book... but that's a story for another day. Dodd used to write strictly historical romances; but recently (2003), she switched to contemporary and paranormal novels, of which this book is one of the former.

Danger in a Red Dress wraps up her two contemporary series: Lost Texas Hearts and The Fortune Hunters. Don't ask me to sum up those series or how this book is supposed to wrap them up, exactly, because quite frankly I don't remember anything about them.

The "plot" to this book is sort of all over the place: a nurse named Hannah accepts a somewhat sketchy job taking care of a rich old lady, due to circumstances which are outlined with unnecessary detail at the beginning of the book. A security guy named Gabriel is hired by said old lady's son to keep an eye on Hannah. As soon as he sees her photo, he's in lurve. Ah, l'amour. So while she's under surveillance, he watches her do things like take showers and sleep (stalker much?); and then they finally move on to talking over the phone! Wow, this romance is steamy--NOT! Then something happens that I can't tell you about (just in case you decide to read the book after this review), and Hannah goes on the run. Gabriel chases her down and they finally meet and fall into bed together. Blah blah blah, Hannah decides to forgive him for being a total dork and they live happily ever after.

One of the things I really liked about this book was the Gothic feel of it: an orphaned nurse, alone in the world, living in an isolated and mysterious mansion and never knowing who she can trust, is a classic set-up for a Gothic suspense novel à la Rebecca. However, I was frustrated by how Dodd wouldn't let the story be Gothic. You don't write a Gothic novel by revealing at the start of the book who the bad guys and good guys are; that takes away all of the suspense. I know she wanted to put Gabriel in there as a good guy because he's the carry-over character from her other contemporary series--but in all honestly I could care less about Gabriel and his role in the series (see above). Is this a good book, does the story flow naturally; that's what I care about. And quite frankly, I thought both the suspense plot and the romance were dumb (I searched for another descriptor, but that sums it up the best).

The main problem with the romance for me is that there isn't one. Gabriel sees Hannah's photo and is attracted to her--all right, I can believe that--but then he gets way stalker-y with the watching her sleep. Meanwhile, he doesn't bother to know her, her personality and character, at all! His brother/client/evil doer tells him that she's an unprincipled nurse who seduced her client for fifty thousand dollars and then killed him to collect the money, and Gabriel just believes him. Hmm, maybe you could investigate that claim, mister investigator man.

There are also a lot of inconsistencies in the book that I just didn't buy into. The biggest one is in the latter half of the book when Gabriel asks Hannah--who's on the run and has just been shot at--to move into his condo and nurse him back to health. Er, one--lame; two--I can see him luring her into his apartment, but I don't see her falling for that excuse when he already has his EMT-trained security specialist living with him and his doc doing house calls. And how does Gabriel have so much money, anyway? Apparently security is the greatest money-making business since making and selling upside-down loans, because the guy is rolling in dough (of course; every romance hero HAS to be rich. He can be ugly, he can be uncouth, but poor? Das ist verböten).

And, when they finally "get together" (re: have sex), the scene essentially runs like this: "Gabriel pulled her down to the bed and DOT DOT DOT." Huh? I don't require sex scenes in my romance novels, by any means, but I have never read a Dodd book without a sex scene in it. Furthermore, there was an awful lot of build-up to how Gabriel wants her sooo baaaaaad, yeah baby; and then dot dot dot?!?!? I feel cheated.

I could really go on, but I feel like I've made my point. This book was terrible. It is NOT worth eight dollars. This might be something to pick up if you deeply feel the need to close the series, but otherwise I wouldn't recommend it.