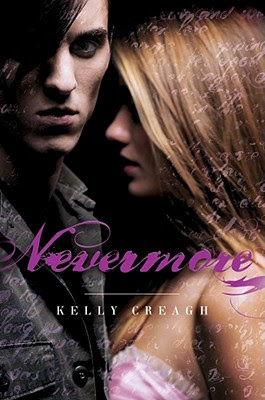 What if Snape and Lilly hooked up at Hogwarts instead of Lilly and James?

Isobel is a blonde cheerleader.  Her boyfriend is the most popular guy at school, and the football team's quarterback.  Her besties are also cheerleaders and have boyfriends on the team.  Isobel's world may look great from the outside looking in, but it's one that's very insular and brooks no deviation from the norm.  When she's paired with Varen, a super-goth guy in her English class, for a project, Isobel is NOT. Happy.  But she needs to pass English or she'll get kicked off the cheer squad, and Varen at least reads (unlike her), so she begrudgingly agrees to meet him on Saturday in the library.

If I had to compare this book to something, it would be chocolate--dark, addictive, and the perfect thing to devour on a crisp fall afternoon.  It has a deliciously Victorian Gothic feel to it, which is balanced out nicely by humor and real-life teen crises we can all relate to (where to sit in the lunchroom!  OMG, the social minefield!).  And even though it takes a while to get going, it is also very, very romantic.  Le sigh worthy.  There will be poetry.

I mentioned at the beginning of this review that the romance in Nevermore can be boiled down to if Snape and Lilly from Harry Potter hooked up.  If you're a fan of Snape (as you might have guessed I am--and not just because he's played in the movies by Alan Rickman, although that is definitely a big part of it), you have to read this book.  Varen totally has the attract/repel thing going on that Snape does, and even though this makes him very much an unlikely romantic hero, it works.  Varen is a deeply unpleasant person who puts every effort into demonstrating how little he thinks of Isobel and her opinions--which makes his eventual respect for and attraction to her all the sweeter.

Another unique element in Nevermore is that it has its own visual language.  At one point, Isobel's brother says, "If this were in Japanese, it would so be an animé," and he's absolutely right!  You can see in your head a kind of stylized Edward Gorey/animé scene when Creagh describes things such as, "...like in a creepy painting where all the figures seem to stare at the onlooker, they turned their heads.  All those outlined eyes chiseling into her..."  The graphic visuals add a lot of character and fun to the novel that makes it distinctive.

The only thing I didn't like about the book was the last third.  During this chunk, Isobel goes into some strange land connected to Edgar Allen Poe.  This might have worked, if the fantasy element had been better integrated into the novel as a whole.  As it was, it felt tacked on and out of place.  Plus, Varen and Isobel were completely separated for the majority of that section.  Since the message of the book was that Varen and Isobel could solve impossible problems as long as they were together, I felt the ending betrayed the theme of the novel.  It would have made more sense if Isobel and Varen had worked together.  And I wanted an explanation for all the WFT crap happening to come from Varen, not Random Reynolds.

Overall, though, I really recommend this book.  It's atmospheric, fun, romantic, and to be totally honest all I've wanted to do since I finished it is go back to the world Creagh has created!  Definitely, definitely worth picking up.