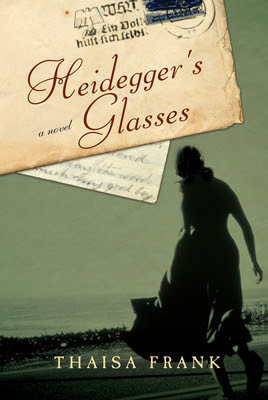 We wandered 'neath
A sky of stars, now fixed
And you are lonely
Come quickly

Past the shoes, the fence
The trees, the holes,
The fires, the jewelry
We are waiting


In a secret bunker in WWII Germany, a fake sun and fake stars shine on a strange world, where Scribes answer letters from the dead.  Everything seems stable, until the Scribes are called upon to answer a letter from someone who's among the living.  How can they possibly respond to such a request?  What will happen when those who speak to the dead call upon the living?

This is an absolutely fascinating novel.  It's all about death, but is so oddly charming that it's not depressing--perturbing and uncanny at times, certainly; but unlike what one would expect from a book about the last months of WWII, it leaves the reader with a sense of peace rather than desolation.

The novel is also very smart and capable of rewarding both those who want a quick read, and those who want to dig into a story with greater depth.  I was enthralled by the classical symbolism in the text--as Heidegger says, "Nothing like the Greeks."  The letters from people in work camps ring through the narrative like a Greek chorus, or souls floating in the river Acheron.  The compound itself is like a Purgatory or a gateway into the underworld.

And what would the Underworld be without a Persephone?  Here the role is filled by the character of Elie Schacten, who brings life to the compound by sneaking out to get food and clothes, and helping refugees escape to Holland.  Elie is a mysterious character with two names, many questions about her past, and a compelling personality that makes everyone fall in love with her.

There's also Elie's lover and the Obërst of the compound, Gerhardt Lodenstein.  I love Lodenstein!  He is totally the hero of the story.  He travels into hell (Auschwitz) to rescue two souls and bring them back into the land of the living.  Or at least the Compound, which is close enough.  His character is also the one that seems to go through the largest personal journey during the course of the book.

I remember hearing once that The Reader was about how the generation after WWII dealt with the guilt of the Holocaust.  A similar thing is true of this book:  it's about the ways people deal with the weight of death during war--whether it's survivor's guilt or the guilt of having killed someone.

All of this may make Heidegger's Glasses sound like a very heavy read, but it isn't--it goes by very quickly and feels slightly fanciful.  I don't know if there were actual Scribes who answered letters from the dead for Goebbels, or an actual Compound--but it could have happened, even though it's completely insane.

The plot is fairly thin and doesn't even get going until around page 100, and I thought the wrap-up was a little weak and left a lot of unanswered questions, but this book isn't really about the plot--it's about the world of the Compound and the people who inhabit it.  Overall I thought Heidegger's Glasses was completely recommendable.  I'm so excited for people to read this novel because there's so much in it to discuss and think about and connect with--and at the same time it's so creative and different.  I have the feeling Heidegger's Glasses will have a lot of imitators and even more admirers.

If you like historical fiction and magical realism at all, I highly recommend this novel. And don't forget to come back tomorrow for an interview with the author!