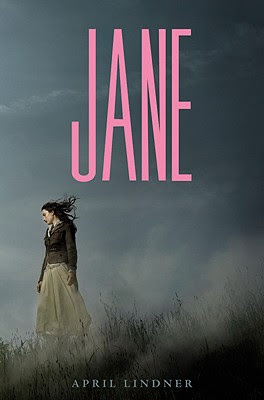 What if Mr. Rochester was a rock star?

Indeed.  What if.  What if Jane Eyre was never written?  Where would we go to for our innocent-jeune-fille-makes-rich-grizzled-old-guy-fall-in-love-with-her plots?

Jane is an adaptation of Jane Eyre set in the modern-day, with Mr. Rochester played by been-there-done-that rock star, Nico Rathburn.  Orphan Jane Moore is forced to drop out of Sarah Lawrence after her parents die, and lands a pretty posh job as a nanny to Rathburn's daughter.  I won't summarize the book any further, because if you're at all familiar with Jane Eyre, there's no need.  You already know what happens.

I've read a few adaptations of Jane Eyre that tried to be more original--Jenna Starborn by Sharon Shinn leaps immediately to mind.  That novel was set in the future, and Rochester's secret in the attic was much more creatively adapted to the setting.  Another adaptation that was pretty good was Mary Stewart's Nine Coaches Waiting, which was less literal and had the heroine falling in love with the mysterious son of the grizzled estate owner.  But even though Jenna Starborn and Nine Coaches might have been more clever, as a piece of pure romantic escapism I didn't enjoy them a quarter as much as I enjoyed Jane.

The novel is distilled into highlights of Jane Eyre, like a movie (in fact, I kept thinking it would make a better movie than a book), and moves along pretty quickly.  The estate is still called Thornfield, there's still a nice housekeeper and a suspicious resident of the uppermost floor, and the whole book feels a little anachronistic.  There may be cell phones and the internet, but there are no TVs and the internets is used just a time or two.  Jane herself doesn't feel like a modern teenager, and it's easy to forget that's what she is--especially the teenager part.  She hasn't heard of a major rock star and only listens to classical music?  I don't listen to hip-hop, but I still know who Jay-Z and Timbaland are, you know what I'm saying?  Plus she doesn't believably think or behave like a nineteen-year-old, even a mature one; she's got way too much perspective.

As for Nico Rathburn, he's not a carbon copy of the original Mr. Rochester.  He's much nicer and laid back, and pretty much an all-around good guy.  His "temper" is occasionally mentioned, but I didn't see much evidence of it in the story.  As I wrote in my musical notes for this book, as a musician I imagine he's based off Bruce Springsteen: there's a quote from "Factory" on the dedication page, and Nico's songs, like Springsteen's, have a lot of references to streets and night and the kind of workingman's romanticism you find the Boss' songs.  Personality-wise, however, he's nothing like Springsteen (or any other great musician I've ever heard of), which is probably all for the best--Springsteen's old as dirt, not to mention a pretty weird dude.  Nor could I imagine Nico as a serious drug addict, although that was supposed to be the awful thing in his past that made him all broody.  Again, for the purposes of the book, this was probably for the best: a realistic crazy ex-coke head musician would be a hard sell as a romantic hero (although potentially awesome!).

And don't even get me started on the hit-you-over-the-head nature->sex metaphors.  Lordy lordy.

That being said, I did wildly enjoy this book.  Maybe I'm just a sucker for these types of plots, but I thought Jane and Nico had a lot of chemistry, and the way Nico comes to rely on Jane as not only a girlfriend but a true friend was a little obvious but sweet.

Jane Eyre is about a woman who becomes independent and socially mobile by remaining true to herself and defying expectations of what a woman should do or be.  Jane is a fairy tale about a girl who marries a prince that just happens to have a crazy woman living in his attic.  It's a quick read--I finished it in a day--that's perfect when you're craving Jane Eyre, but don't have the energy to get mired in the whole 19th-century rigmarole.  And it's way better than any movie adaptation I've seen so far.

So, I definitely recommended this book for Jane Eyre fans.  But if you haven't read Jane Eyre, please don't read Jane first--the original is still soooooo much better.