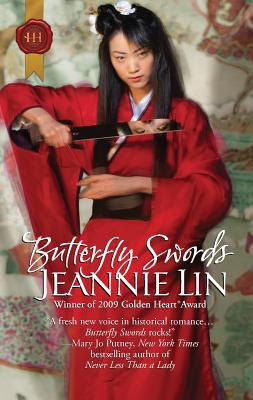 Tang dynasty.  Princess Ai Li runs away from her soon-to-be husband after learning he's a traitor.  But how will she get back to her family when her fiance, Li Tao, controls the entire province with his huge army?  That's where Ryam the Barbarian comes in.

The setting for this book is extremely unusual for a romance novel.  Most are set in nineteenth-century London; this is set in eighth-century China.  Eighth-century freaking CHINA!!!  I should have been geeking out with the awesomeness of it all, but it felt disappointingly un-exotic, and that was really my biggest problem with the book.  In every respect other than the setting, this is your typical romance novel.  And honestly, if you switched the setting around to, say, medieval Europe, it would be almost exactly the same book.

Ryam and Ai Li meet at a lonesome inn.  He's starving and alone, and trying to make it back to his comrades who may or may not be hanging out in "the desert region."  Ai Li shows the scary ghost barbarian a kindness by sharing her rice with him; a few paragraphs later, Ryam rescues Ai Li from some of Li Tao's troops.  Trust!  Love!  Solidarity!  Ai Li convinces Ryam to help her trek across empire to Changan, the capital, where her family lives.  Throw in a stint of sword practicing and suddenly they're crawling all over each other.  But Ryam worries that Ai Li's powerful father will ever accept a poor soldier such as himself for a son-in-law.

The story itself was okay.  Ryam is some sort of Goth, I'm guessing, although his origins are never spelled out.  Nor are we ever given a good explanation as to how and why Ai Li can speak his language.  What language exactly are they speaking?  Latin?  And why in the world would a Tang princess educate herself on how to speak a barbarian language?  I'm sure she'll need that for her future as dutiful wife number one.

I think my enjoyment of this novel was colored by the fact that I'm a huge Jade Lee fan.  She's the only other author I know of who writes romances set in China, and her books make me feel like I'm actually in China.  Her Chinese and European characters have a whole cultural history working through their backgrounds that they have to reconcile, and it makes their relationships feel very authentic.  With Butterfly Swords, I wasn't even sure where Ryam was from, let alone got a sense of his cultural background and how that differed from Ai Li's.  The two characters did have chemistry, but I found myself wondering why Lin made Ryam "European" when a Chinese character would have done just as well and probably would have made more sense.

This novel was okay, but took way more time to read than the story warranted.  Maybe Jeannie Lin will improve as she writes more, but for right now I'd rather just re-read something by Jade Lee.