Today I'm very pleased to have Kelly Creagh, author of Nevermore, stop by for an interview.  Nevermore was one of my favorite books of 2010, so I was happy when Kelly took some time out of her super-busy schedule to answer a few questions I had about the book.

1.      Varen is such a great character! Did you base him off anyone (Severus Snape, for example ;)?

Varen was and is a blast to write. He’s so complicated and conflicted. I didn’t base him off of Snape, per se. Since Snape is one of my all time favorite characters, he may very well have had an influence on my writing but I didn’t set out to create a character like Snape. Actually, Varen was loosely inspired by a real person I knew who always wrote in purple ink.

2.      Nevermore is an incredibly visual book.  Were you inspired by anime or comic books when you were creating the "look" of the novel?

I was mostly inspired by my own memories of high school as well as my current surroundings. Nevermore is based in a semi-fictional Louisville, though the city is never mentioned by name. Trenton is based off of my own high school and Varen’s neighborhood is based directly on Old Louisville, which is one of the nation’s largest preservation districts. Another huge influence was the imagery in Poe’s works, especially in The Masque of the Red Death and his poems Dream-Land and Ulalume. I took as much as I could from Poe’s works when constructing the dream-world aspects of the novel. This includes the characters found in this realm, like the Nocs and even Reynolds.

3.      It's pretty unusual to have a heroine who isn't bookish in YA novels.  Were you worried about readers being able to connect with a character who didn't read?

I didn’t worry about that at all, really. I was just writing about the person who was in my head. In many ways, Isobel led the way in the story and Varen too. I always know I’m doing something right when the characters take over and it begins to feel as though I’m taking dictation rather than composing. I think that even though Isobel isn’t the biggest fan of literature, she is still relatable to avid readers and reluctant readers alike. It was actually very fun to create a main character who was popular, coordinated, spunky and a little different than your normal YA heroine. When I began writing Nevermore, I didn’t know much about cheerleading at all but I knew that Isobel loved to cheer and I knew that it was one of the most important things in the world to her. So that meant I had to go out and learn everything I could about cheering. This included sitting in on a practice session. I also watched documentaries on cheering and read coaching manuals. I was never the athletic type in school but it has gotten to the point where I’m such a cheerleading fan. It’s such an intense sport and it takes so much energy, resilience and bravery—which are all of the qualities I could hope for in any heroine! 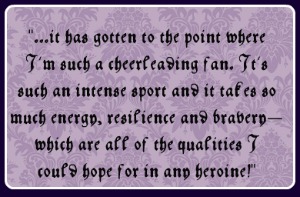 4.      Why do you think Edgar Allen Poe and his work is so appealing, even after more than a hundred years?

I think Edgar Allan Poe remains so popular because of the nature of his work. So much of what Poe wrote about focuses on what happens after we die. This is unknown territory that will never ever cease to be intriguing. Poe’s brand of horror is more about the mind and less about gore and shock. That’s not to say that he hasn’t mixed in his own fair share of slashing axe-through-the-brain terror. But bloodshed in Poe’s works is never gratuitous. And really, what turns out to be so unsettling about his stories is the psychology behind the mayhem.

Right now the band is enjoying the success of their hit single, Emily Not, Not Gone, which you can download from my “Extras” page. Stay tuned to my website and blog for any updates about their music, appearances and future albums.

6.      What would you say the theme of Nevermore is?  Are the other books in the series going to have the same theme?

I never set out to write a novel with a specific theme in mind. If I had to pinpoint the theme of Nevermore, I would say that it has a lot to do with acceptance of differences and also not judging things on face value alone.  The theme of the sequel will be different. The story gets much darker. 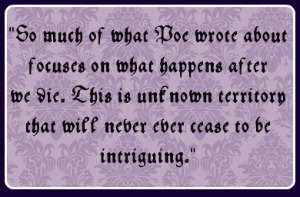 7.      Reynolds is supposed to visit Poe's grave one day every year.  Have you tried to catch him in the act?

The Poe Toaster is a real person who visits Poe’s grave every year on Poe’s birthday. “Reynolds” is the name Poe was calling out just before he died. As far as I know, I am the first author to connect the two into one character. And I have seen the person known as the Poe Toaster! In January 2009, I went to Baltimore with a few of my friends to witness the rite and I was lucky enough to catch a quick glimpse of the toaster. In January 2010, the toaster did not appear at Poe’s grave. It has been the only time he has failed to show in the 60 years the ritual has been documented. I can only hope that he will return in 2011! Be sure to google him on January 19th to see if he came!

Yes. But that’s all I’m willing to say!

9.      Will Varen ever graduate from high school?

;) I can’t answer that one without giving too much away. 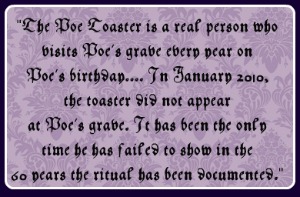 10.     Are there any plans to adapt Nevermore into another medium--graphic novels, TV, movies?

Wouldn’t that be awesome? I have to admit, I would LOVE to see Nevermore adapted to film. Whenever I write, the stories in my head play out like movies in my mind's-eye. So I think it’s only natural to want to see how it would really appear on the big screen. Not only that, but how cool would it be to watch the Nocs come to life?
Right now, there is no movie or graphic novel adaptation planned. Perhaps sometime soon, though!