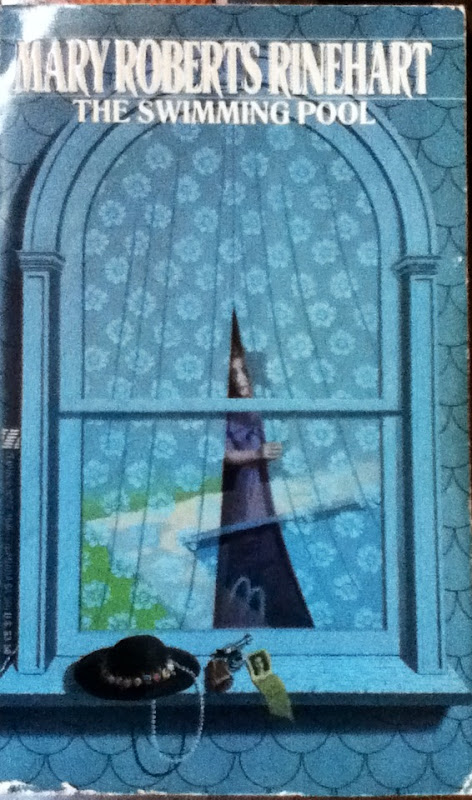 THE POOL, THE OMINOUS POOL. In 1950s New York, Lois lives in genteel poverty with her brother in the dilapidated remnants of their parents' country mansion. Then her spoiled, wealthy, and glamorous sister, Judith, divorces her husband and decides to move in with them. All of the siblings think this a TERRIBLE idea, but naturally Lois agrees because it wouldn't be much of a book if she didn't. Soon their house is being broken into nearly every night, there's an entire battalion of lurkers in the bushes, the sketchy guy renting their cottage starts hitting on Lois, people can't step outside without being shot at, and there's a dead woman in the pool. Trouble follows Judith around like a bad cold. The only question is, when the heck is she going to move out?? (I kid, the real question is who killed the woman. Kind of.)

I really enjoyed the first part of The Swimming Pool. It's set up as a sins-of-the-fathers tale from the beginning, what with Lois and Phil living in the grand ruins of an American dream gone wrong, and the story of their father's suicide after the stock market crash in 1929 clearly having something to do with the current mystery--although exactly what isn't hashed out until the very end. I also thought Judith, while THE MOST ANNOYING CHARACTER IN THE WORLD, was interesting and fun to read about in a Norma Desmond kind of way. The tone of The Swimming Pool is also somewhat similar to Sunset Boulevard, in that it's a mixture of Gothic, tragedy, and humor; and I thought all those elements worked well together.

That being said, The Swimming Pool started to annoy me near the end. There were just too many break-ins and shootings happening without any advancement of the plot; and there were only so many times I wanted to hear Judith being questioned when it was obvious she wasn't going to say anything. If only she had been killed in the first half, it would have served the same purpose! Honestly, I expected Judith to die, since Mary Roberts Rinehart sets us up to hate her guts; but instead she gets a kind of pseudo-redemption that I found more annoying than anything else.

Honestly, I don't think I can recommend The Swimming Pool, although I wish I could. It just goes on for way too long, and by the end I felt like I'd been chewing my own arm off to escape a trap and had lost the will to live (not to be overly dramatic or anything). You should read The Man In Lower Ten (review here) or The After House (review here), instead.