Giveaway & Review: WEAK AT THE KNEES by Jo Kessel 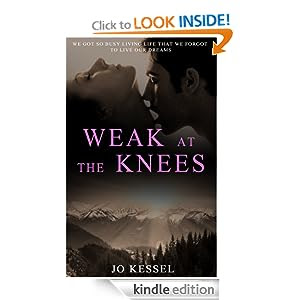 I received Weak at the Knees through TLC Booktours in exchange for writing an honestly honest review.

Before I start discussing this book, I want to let you all know about an awesome giveaway associated with the book tour. One lucky winner will receive a bottle of Châteauneuf-du-Pape, a famous wine from the Rhône wine region of southeastern France. The giveaway is open internationally to those of legal drinking age. To enter, simply fill out this Google form: https://docs.google.com/forms/d/13PQ8EBxNMtgk_JrkP391qhLCxtDUDioY1CLCq18IXlI/viewform

Now on to the review!

Danni's been dating the handsome and smart Hugh for eleven years, ever since high school. He lets her live in his flat even though she contributes nothing to the household expenses, has no job, is not going to school, and doesn't even have a consuming hobby. Meanwhile, he works his patootie off as a barrister. Not surprisingly, Danni is bored; and also unhappy, because she's never had an orgasm. Tiniest violin in the world! Maybe she should buy Hugh a manual or a diagram or something. Then her best friend suddenly comes down with a mortal illness and makes Danni promise her at her deathbed that 1. she's going to break up with Hugh, and 2. she'll never sleep with a married man. Because... science? So of course when her bestie dies, Danni breaks up with Hugh and sets off for the French Alps where the reader knows two things will definitely happen: she'll have an orgasm and get involved with a married man. And she does.

The above paragraph is basically Weak at the Knees' prologue, which clocked in at nearly 1/4th of the entire book (22%). It wasn't labeled a prologue, but that's sure as heck what it was. You all know how I feel about prologues, and especially how I feel about prologues not labeled as such. Quiz: what's the first rule of telling a story? Begin at the beginning! Really the only reason I kept reading was a morbid curiosity to see when the book would actually get started. Eventually it did, but it was still really boring because having an orgasm/affair isn't much of a plot. Also, by that point I disliked whiny Danni so much I wouldn't have cared if she took a header off a mountain.

Basically Danni has no agency in this novel. Does she do anything, period, at the start of the book? No. I'm probably supposed to take her leaving Hugh as a sign of agency, but why does she leave him? Because he "can't make you happy," according her best friend. Right. That might be because no one person can make another person happy. All Danni's decisions afterward are predicated by the actions of a man, from learning how to ski to having sex. Yeah, she may want to have sex with the guys, but the decisions are always ultimately theirs. The males drive the other action in the book, too: when Danni leaves France, for example, and even when she goes back.

I will admit I liked the meet-cute between her and Olivier du Pape, mainly because as soon as someone mentions he's married (which happens immediately) you know they're going to have sex. But the scene where they get together is kind of hilarious, and not in an intentional way. I loved it when Olivier was like, "I don't want you to ruin your life by having an affair with me!" Ruin her life, really? Someone's been reading a liiiiiittle too much Gustave Flaubert. And what's going to happen to Olivier's life in the meantime, business as usual? Nice dichotomy there. In any case, it's really hard to believe that there are any stakes involved in this extramarital affair because Olivier's wife is never there. Literally, she is never in town. We never meet her; I don't think we even ever know her name. Yet I found myself more sympathetic for her than for any other person in this book because she's the only one who's completely innocent of wrong doing and she gets shat on because Olivier and Danni find one another really, really attractive.

Melody from Redeeming Qualities wrote recently that one thing she loves about romance and adventure novels is "watching the author’s resultant struggle to steer the characters to a happy ending without in any way impugning their honor." This is not something Jo Kessel apparently struggled with in Weak at the Knees; all the characters acted dishonorably and in an expedient way to get what they wanted. Instead of caring about who she was hurting and whether or not it was worth it, Danni was mainly concerned that Olivier was taking advantage of her. It's a lovely world of narcissism and actions without consequences that these characters live in.

Weak at the Knees also had quite a few editing problems, but honestly I find the lack of storytelling and female agency in this novel more egregious. What story is being told here? Why should the reader care? These are basic questions that need to be addressed in any story.

Anywho, if you're still interested in giving Weak at the Knees a try, TLC Booktours is offering a paperback (US/Canada only) or eBook (international) copy of the book to one lucky reader! Just enter your name and e-mail into this handy-dandy Google form and I'll draw one winner using random.org on Friday, September 27th, and contact the winner by e-mail. All information will be kept private and deleted after the giveaway.