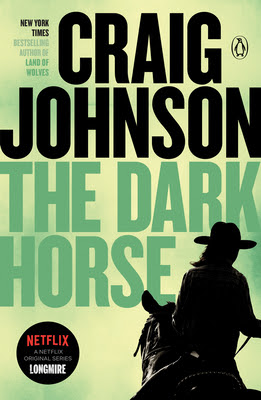 Mary Barsad confessed to killing her husband, Wade, after he set fire to their barn and burned all her horses to death. And who can blame her! But for some reason Sheriff Walt Longmire doesn't believe she did it. So he goes undercover (read: people start figuring out who he is within five minutes) in the town of Absalom, Wyoming, to find out who did kill Wade, and why they framed Mary for his murder.

You know that town from the movie Unforgiven, Big Whiskey? Well, Absalom is kind of like that. It is godforsaken. No one wants to be there, even the people who live there. It's like the gate to hell ("Abandon hope, all ye who enter here"). Not the greatest place to live, but a REALLY great setting for a novel. Combine that with Walt's flashbacks of Mary Barsad's stay in his jail, and The Dark Horse definitely has the feeling of a western noir. It's very dark, but balanced nicely by Walt's trademark self-deprecating humor.

So basically, I really liked The Dark Horse. The regular gang—Henry, Vic, Lucien, Rose, etc.—aren't in this volume very much, but the new characters Craig Johnson introduces are full of personality and interesting. There are also flashbacks, and as anyone who reads this blog regularly knows, I'm not a fan of the flashbacks and backstory. I usually skim over them, which is exactly what I did in the previous Longmire novel, Another Man's Moccasins. However, the flashbacks in The Dark Horse actually aren't unnecessary backstory; they're where about 90% of the detecting happens, and I really wanted to find out why Walt was convinced Mary didn't kill her husband. I can also see where breaking up that section into small segments throughout the novel told the story more effectively than if Johnson had written the book with a more linear timeline. So this is one of the few times where I can wholeheartedly endorse flashback scenes.

Another aspect of The Dark Horse I found really interesting is that Johnson kind of takes a What If scenario with modern medicine. Usually his mystery plots are pretty straight-forward and based on things that everyone already knows is a problem: human trafficking, drugs, etc. etc. But in The Dark Horse, Johnson lays out a scenario where zolpidem is used to commit a murder. Kinda creepy.

Unfortunately, the last fifty pages of the book were a major drag. It seemed like Walt just rode around on a horse for a reeeeeally long time. And the conclusion was a joke—the book just abruptly ends, after which there's an annoying epilogue.

But overall The Dark Horse is a good novel with one of Johnson's more twisty mysteries. Can you imagine the type of person who would set fire to a barn and just let the horses inside it burn while he watched? That's a bad un.