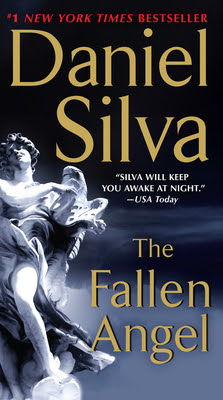 Gabriel Allon, the most famous retired spy in the world, is restoring a Caravaggio for the Vatican Museums when a museum employee is found dead, an apparent suicide, in St. Peter's Basilica (there's blasphemy for you). Luigi Donati, the Pope's secretary, asks Gabriel to look into the matter on the DL, and Gabriel agrees even though Luigi obviously knows more than he's telling. Soon Gabriel isn't just investigating a woman's death, but an art crime ring, the mafia, Hezbollah, and sundry threats against Israel.

Fallen Angel is the novel preceding immediately preceding The English Girl. I didn't know this when I started it, and I didn't mean to read this series backwards, but apparently it's happening. In any case, I wasn't as impressed with Fallen Angel as I was with The English Girl, although the novel was still entertaining and I'm increasingly fascinated by the character of Gabriel Allon.

Fallen Angel has the same basic structure as The English Girl: the story starts with a very specific, localized mystery, then expands to international threats. I loved the beginning of the book—it had the flavor of a Dan Brown novel, only really smart and well-written. I thought Fallen Angel was going to be all about art crime and I was super excited! (Side note: I always thought it would be awesome to be part of the FBI Art Crime Team.)

Unfortunately, I started having trouble with Fallen Angel in the transition from Rome and the art crime mystery to Allon and his team moving against Hezbollah. There basically was no logical transition, it was just like, "Oh Hezbollah's behind everything somehow (???), and we have to stop them RIGHT NOW!" I am still unclear as to what exactly one had to do with the other, and how the characters arrived at this conclusion. Because the change was so abrupt, I was thrown out of the story. It felt like the Rome section of the book and everything else belonged in two separate novels. Good novels, mind you, but narratively they didn't fit together.

I also found myself very annoyed with Chiara, Allon's second wife. She wasn't in The English Girl much, and apparently that was all for the best, because in Fallen Angel I found her to be whiny, clingy, and a bit pointless. The scene that really made me roll my eyes was when she nobly waited in the hotel room while Gabriel bounced off to assassinate terrorists, and strained to hear the sound of sirens so she'd know he was alive. Because that was what Gabriel told her to do. EYE ROLL.

Even when Chiara was annoying me or the story was jumping around, though, Allon was such a compelling character that there was no way I would have even considered not finishing this book. And the climax in Jerusalem was perfectly done: intense, suspenseful, and completely over the top—but in a really fantastic way.

Bottom line: this is a very solid, intelligent thriller; it just doesn't have the epic scope that The English Girl does. It's quieter, less ambitious. Allon is a man haunted by his past in every city he visits, not so much fallen as trapped in Purgatory, but Fallen Angel isn't the novel that gives him a new start.

I will definitely be continuing with the series and am looking forward to spending more time Gabriel Allon.