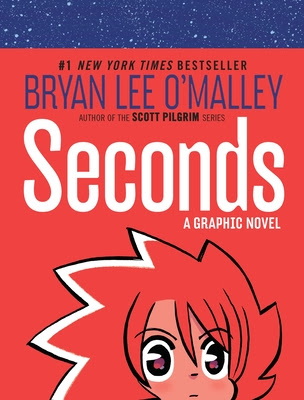 It's probably not totally obvious, but I am a huge Bryan Lee O'Malley fan. I loved his first graphic novel stand-alone, Lost At Sea, and I think Scott Pilgrim might have ruined me for all other graphic novel series. It was that amazeballs. So to say I was looking forward to Seconds would be putting it mildly—I've been wound up like a spring waiting for O'Malley's next project for YEARS.

Was it worth the wait? Well...

The start of the comic is actually pretty strong. The main character, Katie, is the head chef at a hip restaurant named Seconds. She's the queen bee of the place, but she wants more. To that end, she's opening another restaurant across the river, creatively named Katie's. However, the old building is a money pit and renovations are dragging on and on and on, so in the meantime Katie's stuck at Seconds.

Katie isn't the best person. She's selfish, oblivious to the people around her and their feelings, and like many people who work in top kitchens (I'm guessing, based on all the reality TV chef shows I watch), she's a ball buster. But O'Malley manages to make her sympathetic, especially when she uses the mushroom a house elf gives her to rewind time and save a shy waitress from a serious kitchen accident.

Of course, once Katie finds the elf's stash of mushrooms, she uses them to rewind time and erase really stupid stuff like staying up all night watching Breaking Bad on Netflix. Would any of us do any different? Probably, because I'm assuming y'all aren't assholes. But I think we can all understand the temptation, despite the fact that Katie's constant rewinding is obviously going to fuck up the space-time continuum.

Here's the thing with Seconds: it's good, because it's by Bryan Lee O'Malley. But it's not as good as either Scott Pilgrim or Lost At Sea. O'Malley's strength—aside from his visual style, which is slightly muted here but still evident—lies in creating characters that are at once really quirky and yet totally identifiable. As I said in my review of Lost at Sea, I KNOW these people. That's not the case in Seconds. Katie's well-drawn(ish), but the secondary characters? Not so much. I was particularly annoyed with the whole love triangle between Max, Katie's cool ex, and Andrew, the chef she trained to take over for her at Seconds. What either of these bozos see in Katie, or vice versa, I have noooo idea. Their personalities, if one could call them that, were interchangeable, and Katie didn't seem to think of either of them as more than convenient bed partners. I didn't care which guy she wound up with because it didn't really matter, and I was kind of irritated she did settle with one of them by the end of the book.

The story also starts getting really boring and repetitive about 2/3rds of the way through the comic, especially since the solution to the whole problem seems really obvious. Everything is fixed too easily, with too little consequences, and as a result the themes of Seconds—responsibility, patience, growing up—aren't effectively fleshed out.

There's also nothing original in Seconds like there was in Lost at Sea and Scott Pilgrim. It's very self-referential, which COULD be amusing, but turned out to be annoying instead. Just because a joke worked—and brilliantly—in Scott Pilgrim doesn't mean it will work here. There's not enough distance between the two comics that fans of O'Malley will pat themselves on the back for remembering the reference, which is really the only reason to insert jokes like this:


Keep in mind that I'm being hyper-critical here because I expect a lot out of O'Malley, and for good reason. Seconds is by no means a terrible comic. But does it stand up to O'Malley's previous works? In my opinion, no. If you're starting out with O'Malley, I wouldn't recommend Seconds; and if you're already a fan, you probably already bought it anyway. I just hope O'Malley can shake off whatever malaise he's got himself mired in and give us something with more energy and a more developed storyline for his next project.