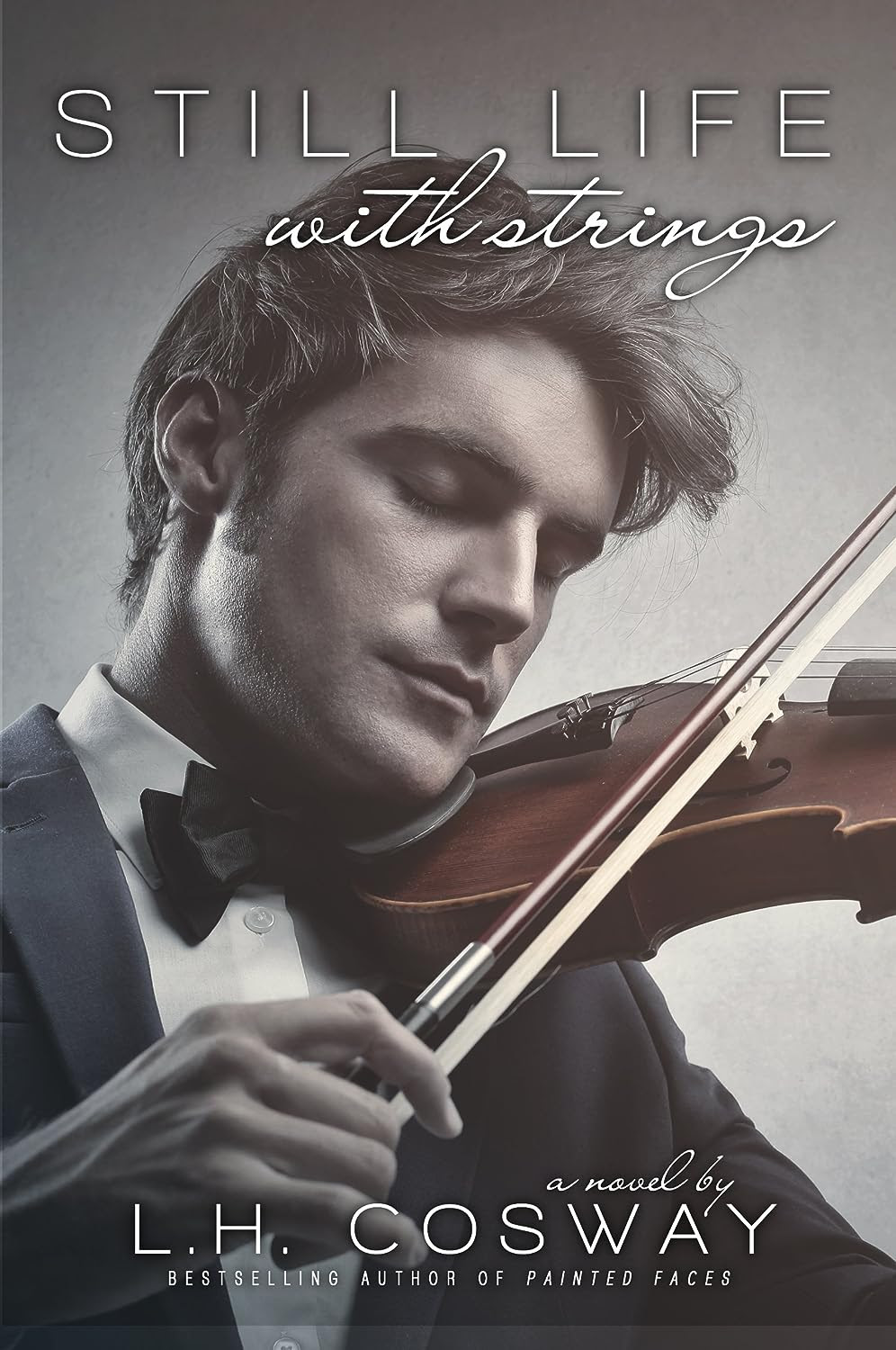 Jade makes her living as a Dublin street performer and symphony bartender. After a one-night stand with the symphony's new violinist, Jade and Shane start falling in love, despite the fact that Jade made it clear she was not interested in being anything other than friends. Because reasons. Will Shane be able to convince her to change her mind?

Last year I read and enjoyed LH Cosway's Painted Faces (you know, the book with the drag queen hero), so when I saw Still Life with Strings on sale, I was more than willing to download it. On the surface Still Life with Strings sounds more conventional than Painted Faces—the hero is a musician, and the heroine *is* a street performer, but it's more of a hobby than a full time job. However, I'd go so far as to say that in their own ways Shane and Jade are more unique, and more fully-realized, than Freda and Nicholas from Painted Faces, with a lot more chemistry and a more believable relationship arc. I stayed up until 5 in the morning reading this novel—on a work night, no less—and as much as I enjoyed Painted Faces, I think Still Life with Strings is 1000x better. You all should definitely give it a try.

First of all, the characters. Both Shane and Jade are different and isolated in their own ways, the reasons for which we discover gradually over the course of the novel. Jade's had a hard life, but she maintains her sense of humor and balance through "street performing" as a living statue. I've always wondered why someone would do that, and Cosway makes it sound surprisingly fun and creative. As for Shane, he's definitely an odd one—which actually fits in well with what I know about musicians—and I loved that he spends a good deal of time during the course of the book playing music, writing music, and talking about music. Unlike in some romance novels I could name (coughLickcough), the fact that he's a musician isn't just a hook. It's a part of his character and central to the story.

And speaking of music, the way Cosway incorporates it into Still Life with Strings is brilliantly done. It's not easy to write about music in a way that's unique and interesting, and SHOWS us its importance and effect on the characters, but Cosway does it through imagery and Jade's imaginings, and it totally works.

Still Life with Strings DOES contain several of my least favorite romance tropes: first of all, one night stands that turn into true lurv. So entirely likely, not. However, in this case I found it believable. The trope I had the most problem with was the one where the heroine refuses to start a relationship with the hero just to drag the book out, then changes her mind and says they can be fuck buddies but they won't be "in a relationship." Yeah, it kind of made me roll my eyes a bit, as did the fact that Shane's like, "Sure, we can just be friends. Whatever you want." And then immediately starts hitting on Jade again because HE CAN'T HELP IT. But it was more well-done than in It Happened One Wedding—I mean, there *are* reasons why Jade doesn't want to be in a relationship that apply to every guy out there, not just Shane. Not entirely logical reasons, mind you, but reasons. I also liked the fact that even though Jade was hesitant to get into a relationship with Shane, she was still sexually aggressive and confident. And honestly, Shane and Jade had so much chemistry I was willing forgive the occasional lapse into probably-would-never-happen town.

Another thing that I found kiiiiind of ridiculous and annoying were Shane and Jade's awkward Facebook chats/texts. UHG PEOPLE. I don't want to read pages and pages of characters texting, messaging, or emailing unless it's 1. necessary, and 2. interesting. Okay? Like those things aren't tedious enough in real life (and incidentally, my social media discussions are usually way more interesting than Shane and Jade's).

But aside from that, Still Life with Strings was a really creative and different romance. There are a lot of things going on in this book—mystery, magical realism, Dublin's indie art scene, both Shane and Jade's messy and complicated personal lives, music, class conflict—but it all comes together without one element overwhelming the others. I might have enjoyed Painted Faces, but Still Life with Strings has turned me into a LH Cosway fan.