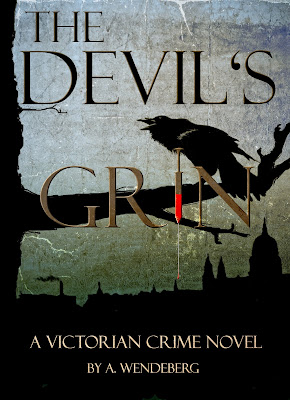 By day, Dr. Anton Kronberg is one of the leading bacteriologists in the world. By night, Anton becomes Anna, a nurse living in the worst slum in London. Since women are barred from practicing medicine, Anna pretends to be a man so she can pursue her passion for science. No one's ever seen through her disguise–no one except the famous consulting detective, Sherlock Holmes. Now Anna and Sherlock must work together to solve the mysterious death of a man found floating in the Thames. Was it disease, or murrrrrderrrrr? I'm guessing the latter.

I have mixed feelings on The Devil's Grin. The story moves very fast, I loved Anna, and the mystery was somewhat chilling. But there seemed to be a lot of gaps in logical storytelling, and by the end I found myself wondering why Sherlock was included in the book at all (aside from marketing, of course).

I'm always a little hesitant going into crossdressing stories like this because they tend not to resonate with me (one word: Yentl. Uhg), but actually the crossdressing was one of the least-problematic aspects of the book. What did bother me was that Wendeberg took what started off as a very interesting character and turned her into something over-the-top and cartoonish. So not only is Anna a crossdressing, famous scientist, she runs through the woods barefoot like a little gazelle and swims in lakes on the moors. Naked. At night. In my head, I was picturing those drawings by (male, naturally) explorers of Indian women swinging from trees bare-breasted. Realism! Anna also exposes her naked self to Sherlock. Cuz, you know, why would a Victorian female who spends most of her life hiding the fact that she's a woman have body issues, AMIRITE?

The investigation also didn't seem like it progressed logically–or, to be more specific, the solution to the problem that Anna came up with didn't seem like a good default option. SPOILERS AHEAD, YE'VE BEEN WAAARNED: When Anna and Sherlock discover that the murder victim came from an asylum where they're performing medical experiments on their patients, Anna's solution is to:


This, she says, is the ONLY WAY TO STOP THEM. What? Huhn? There are a lot of assumptions running through that plan. What if she doesn't get the grant? What if they move on to other diseases by the time she's an expert? Meanwhile, there are a bunch of people still being experimented on and dying! Why didn't she and Sherlock do what they ended up doing anyway and just call the police to raid the asylum? Sure, they found a few more of the people working behind the scenes to run the experiments by following Anna's plan, but they probably could have discovered all that just as easily through other investigative methods. I would have expected Sherlock to be more dedicated to the principle of Occam's razor.

And speaking of Sherlock: let's be honest, the only reason I decided to read this book was because Sherlock Holmes was in it. Yet I wasn't very impressed by his role in the story. He never actually investigates anything–indeed, he doesn't seem to think there *is* anything to investigate (to be fair, he's mostly right). And the "romance" between him and Anna made me roll my eyes. Part of the Sherlock canon is that he's asexual. I'm not opposed to breaking the canon, but if you're going to do it you have to do it in a convincing way–like in the Mary Russell series, for example. Here it just felt rushed and uninformed. Wendeberg could have given Holmes another name and made him just another detective, and I never would have identified him as based on Sherlock Holmes.

This all makes it sound like I hated The Devil's Grin (additional question: what is the meaning of this title?), but I actually didn't. It was an overall enjoyable read with some weird moments. And honestly, I'm not sure I would have enjoyed it as much if it HADN'T had those WTF moments. Without them I might have (probably) gotten bored. Also, how many books do you read with crossdressing female detectives? Not a bunch!

Since this is a fairly original book and a very fast read, I'm willing to forgive a lot. I'll probably wind up reading the second book in this series (against my better judgment, what there is of it). If Sherlockian books about Victorian lady scientists who don't put up with any crap are of interest to you, definitely give The Devil's Grin a shot.