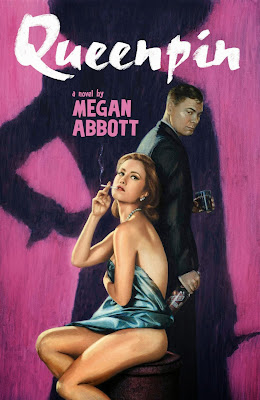 On the surface, a young woman appears to be a good girl: going to school to be a secretary, not sleeping around, taking care of her dad. But on the inside, she craves danger, action, excitement. And when her dad gets her a job at a casino, the world of bookies, gangsters, liars, and gamblers pulls her in. Soon she catches the eye of Gloria Denton, a cash handler for the big boys. Gloria offers her everything a woman could ask for–a swank apartment in the ritzy part of town, fabulous clothes, jewelry, fancy dinners out, cocktails every night, and a job making the rounds of every casino and track in town. But is Gloria her fairy godmother, or her evil stepmother?

I've seen Queenpin around the blahgs a few times over the years and always wanted to read it, but it wasn't until I saw Jessica's post on neo-noir over at Book Riot that I decided to take the plunge. I'm so glad I did! Queenpin is not what I usually read at all–it's hard-core noir. No one in this book is a hero, everyone betrays everyone else, and there's no redemption for the main character. I don't think I've ever read a novel this dark and cynical of my own volition. But at the same time, Queenpin tells a completely gripping story with fantastic, gritty writing that totally sucked me in and invaded my dreams.

In a lot of ways Queenpin reminds me of Rebecca by Daphne du Maurier: our narrator is an unnamed, relatively innocent young girl who becomes fascinated, perhaps even obsessed, with a femme fatale who seems to represent everything a woman should be and everything she's not. "A woman of 36, dressed in black satin with a string of pearls," is how the heroine of Rebecca puts it, except I suspect Gloria is considerably older than 36.

In a few respects Gloria is a mother figure to the heroine, but really there's something more possessive and vaguely sexual about their relationship than a typical mother/daughter dynamic. When the heroine starts sleeping with Vic, a gambling addict, she acts more like a wife trying to hide her lover from her husband than a woman who's dating a guy her boss (or mom, for that matter) would find inappropriate. At one point Gloria tells her, "You're mine. Whoever put those marks on you might as well have put marks on me."

Which brings me to the major difference between Rebecca and Queenpin (aside from, you know, setting and genre and themes. Most things, really): there's no prince charming. Vic has all the charm of Maxim de Winter, but he's without a doubt a complete loser and a terrible person. Yet you can totally understand why the heroine goes for him–it's all about lust, and their scenes together are probably some of the hottest, yet-not-in-any-way-graphic scenes I've ever come across in a book. You can FEEL how they're using each other and it's compelling stuff. Sex, drugs, and rock n roll, baby. The heroine wants it all, and she wants it now, and that kind of greed fits perfectly into her relationship with Vic.

Obviously things do not end well for Vic and our nameless narrator. A gambling addict and a woman who collects gambling profits for gangsters? Yeah, that's a great combo. But the fact that he's the completely wrong person is part of his appeal to the narrator, too.

I'll be honest: as things went from bad to worse in Queenpin, the book started giving me nightmares. What happened to Vic in particular, even though he had it coming (everyone gets what was coming to them in this novel, and seeing as how they're all awful, it's nothing good), was just horrible horrible. Yet I think that speaks more to the intensity of the book than any gratuitous violence in it–I never once considered abandoning it. Like the heroine, I was hooked on the story and determined to follow the actions of these characters to their inevitable conclusion, no matter how bad it got.

Basically, Queenpin is REALLY good. If you want a noir novel with a feminine twist, you can't go wrong with this one. Raymond Chandler couldn't have written a better crime novel. I am definitely going to dig into more of Megan Abbott's noir fiction... although I may wait awhile for the aftereffects of Queenpin to wear off before I do.