In January of 2013, Laura Poitras received an encrypted email from someone codenamed Citizenfour, who claimed to have documents proving a whole host of illegal spying was being perpetrated by the NSA, in violation of the US Constitution, domestically and abroad. Most of Citizenfour takes place over eight days in a Hong Kong hotel room, as the now-infamous whistleblower Edward Snowden divvied up NSA documents to different journalists and prepared for the shit storm that was about to be his life. 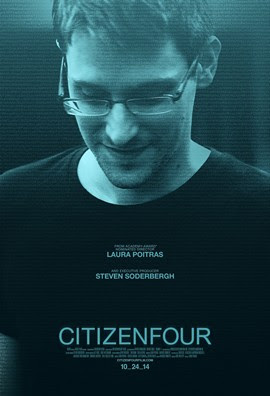 I had high expectations for Citizenfour, mainly because of Anachronist's review but also because it won the Academy Award for Best Documentary this year. I came away with mixed feelings on it. Is it an important documentary? Yes. But I was frustrated by the lack of concrete information.

My biggest issue with Citizenfour is that from the start, Snowden says he doesn't want this to be about him, he wants it to be about the information. Yet Poitras made a film that's basically all about him! And not just about him, but apparently designed to make him look as attractive and noble as possible. Do I admire Snowden? Yes. Do I think emphasizing the sacrifices he made in regards to his family and friends is important? Sure. Do I need the scenes where Snowden is swathed in white robes, all lithe and willowy and peering into the black screen of his laptop as if receiving messages from the great beyond? NOPE.

Furthermore, the information on NSA spying that Poitras is presumably supposed to be conveying in Citizenfour is vague at best. If you want to learn what was in the documents Snowden handed to journalists, and about the events leading up to it, best seek out Frontline's United States of Secrets and give Citizenfour a skip–or at least watch the former before the latter so you're already familiar with the context. And we're only fed the barest tidbits of information on the NSA spying. At the very least Poitras could have kept the camera on Snowden while he explained to Greenwald how to encrypt his emails ("It sounds really difficult but it's actually very easy") and then we would have actually learned something useful!

That kind of ties in to a small beef I have with all the reporting I've seen about the NSA spying, not just Poitras'. People say that Americans don't care the government is spying on them, but I don't think that's true. I think we just don't know what we're supposed to do about it, aside from living off the grid, and that's not going to happen. Keeping your information private online is overwhelming enough without throwing Big Brother into the mix. I'm not saying what Greenwald and the other journalists are doing isn't important and heroic in its own right, but I always get the impression their audience is other political journalists. Aside from concrete examples, like the US listening to every conversation on Angela Merkel's phone, this is not easily digestible information to the average person who just wants to play Candy Crush and check their Facebook timeline, you know what I mean?

If there's one thing I came away with after watching Citizenfour, is that Snowden is a smart motherfucking cookie. I mean, I already knew that on some level, but Citizenfour really crystallizes it. If he'd just released all those documents online, he'd probably be rotting in a hole in prison somewhere like Bradley Manning. Instead he methodically planned out every aspect of the situation and sequence of events that he could in order to minimize the negative effects on the people involved–not just himself, but his friends, family, and reporters. Having the journalists vet the information instead of himself, in particular, was brilliant, and might be the only thing that allows him to return to the US someday (should he wish to). I do appreciate people who are thorough planners. He was also lucky, but mainly he was smart.

While I don't think Citizenfour succeeds as well as it could have in informing people about NSA spying, it is an important movie to watch, especially with an election coming up. This is definitely the most important issue of our time, and as a film designed to make people give a fuck, Citizenfour succeeds.