I was planning to do this Sunday, then time got away from me. So instead of a Sunday Snapshot, this week we have a Monday Snapshot!

Black Ice by Anne Stuart: I thought I'd read this one before, but now I'm not sure. I remember literally nothing about it.

The Graveyard Book by Neil Gaiman: Decided to finally give this book a try.

I went into this movie only knowing that it was a "Star Wars story." In some ways it's everything you'd expect from a Star Wars movie: a ragtag group of unlikely companions, consisting of droids, Rebel Alliance soldiers, criminals, misfits, and reluctant heroes, join together to fight the big bad Empire. In other ways it deviates from the Star Wars franchise dramatically. The first hint that this isn't your typical Star Wars movie is the soundtrack: while Alexandre Desplat's score has hints of Star Wars' iconic orchestration, it's darker and more muted. There's also no scrolling summary of where we are in the story as there have been with all the previous Star Wars movies, so it took me a while to figure that out.

But the major difference between this movie and the other Star Wars films is that the Star Wars franchise specializes in campy adventure. Entertaining adventure, but campy nonetheless. Rogue One, on the other hand, is closer in tone to a WWII movie. There are few "good guys" and "bad guys": both the Rebels and Empire do terrible things that are morally ambiguous at best, and what victories they gain seem small considering the cost. One might be left wondering if it was at all worth it, if one hadn't seen episodes 3-6. It's like Star Wars for grown-ups, basically.

As for whether or not I enjoyed it, at first the movie felt very episodic and pulpy, but once Jynna met with Saw Gerrera, the story sucked me in. The cinematography and acting are both top-notch. The script could have used a little (lot) more character development and the "inspiring speeches" were just like, whatevs. But I'm willing to forgive a lot in this movie because the last scene with Darth Vader was so awesome and badass.

If you like Star Wars, Rogue One is worth seeing. It's light years better than Lucas' wreck of a prequel, and more original than The Force Awakens.

Less than a week till Christmas! Is anyone ready? If you are, you're leaps and bounds ahead of me. I have nothing wrapped, a mere scoach of presents and cards sent out, and I haven't even finished shopping yet. Awful. But I'm sure it will all get done. Eventually. Then I'll be bored. It's a never-ending cycle.

Anyway, if I don't post next Sunday, I hope you all have a Merry Christmas filled with hygge, cookies, friends, family, Netflixing, and reading. Happy holidays! 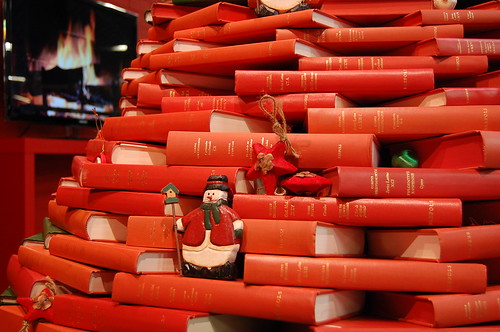