Sunday Snapshot – Of Beasties and Blinds

A Murder is Announced by Agatha Christie: It seems like it took forever for Miss Marple to show up.

Reviews of three books about or related to wine over at Book Riot.

I'll admit that when this movie first came out, I didn't want to see it because the previews made me think, "Hey, I have enough misogyny in my life; let's not introduce any more into it." Plus, I've been highly suspicious of comic book movies everyone loves ever since Guardians of the Galaxy put me to sleep TWICE.

However, I was wrong, and I apologize. I knew this movie would have my undying loyalty when the opening credits listed "Writers: the true heroes of this story." It was entertaining from start to finish and I loved the sarcastic humor of Wade/Deadpool. I also thought Morena Baccarin, whom I shall always think of as Inara, did an excellent job. Yes, it had dark humor, but it was the kind of dark humor where you tell someone they suck because you love them so much. Warm fuzzies all around. It wasn't even that misogynistic by Hollywood standards. Can't wait for the sequel!

Fantastic Beasts and Where to Find Them, starring Eddie Redmayne and Katherine Waterston

Newt Scamander travels to New York City by ship (apparently wizards can't apparate across oceans; don't ask me why because I wouldn't be able to tell you) with a bagful of invasive, non-native magical species. Naturally, they get loose and wreak havoc, but that seems like the least of Newt's problems once the Magical Congress of the United States of America (MACUSA, rhymes with yakuza) gets involved, all worried the muggles will figure out magic exists.

This is an excellent film, from beginning to end and top to bottom. Everything is on point and wonderfully executed: the script, the art direction, the special effects, the acting. Redmayne does a fantastic job, not that I'd expect anything less from him; but the actor who stole the show for me was Alison Sudol, who plays Queenie. That's a difficult character to make likeable and give depth to, but she managed it perfectly. I knew as soon as I saw her I recognized her from somewhere, but IMDb was completely unhelpful. Then I realized she's the singer known as A Fine Frenzy! She also writes screenplays and movie soundtracks. A very talented woman; keep an out for her.

Anyway, there's absolutely no reason not to like this movie, and I did enjoy it. But at the same time it didn't pull at my emotions or suck me into the story the way the Harry Potter movies and books do. Idk, maybe if I'd read the book first I'd have been more engaged. Still, definitely a brilliant film. You won't be wasting your money if you go see it.

Whelp, I haven't gotten any Christmas shopping done yet and I'm buried in work. But instead of taking care of any of that today, I decided to fix a blind in my bedroom that's been broken since the Bush administration. The online instructions said it wouldn't only take 20-30 minutes!

The project was beset with difficulties from the very beginning:

I am so done. Who needs blinds anyway. 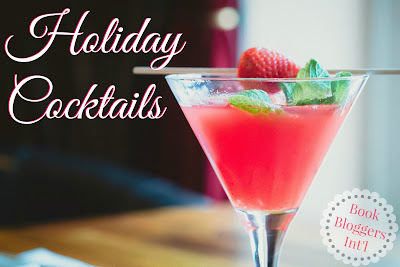 Check out these winter cocktail recipes from Penny Watson over at Book Bloggers International.


Have an awesome week, everyone. Drink safely.