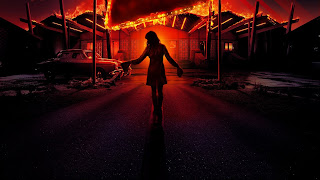 Without further ado, here are the movies that are giving me the holiday feels this year:

She Loves Me, starring Laura Benanti and Zachary Levi

This is actually a musical rather than a movie, but the 2016 Broadway revival was recorded and aired on Great Performances. I LOVE THIS SHOW SO MUCH. If you've ever seen You've Got Mail, it's basically the same plot (and based on the same play, Perfumerie) but set in a 1930s Budapest department store. It's so much fun and romantic, but also real with some heartbreaking moments, and the performances and spot-on. The look on Zachary Levi's face when he realizes his pen pal is his work nemesis is priceless. Plus, if I'm not mistaken it takes place during the holidays.

Okay, so sometimes a Christmas movie sneaks into my not-holiday movie list. This Christmas special goes a long way toward justifying Netflix's existence. It's delightful and heartwarming and Bill Murray is a national treasure. Also the scene with Chris Rock is HILARIOUS.

I've said it before and I'll say it again: it's just not Christmas without Daniel Craig. This movie is sure to be one of my favorites of the year. If you love Clue, you MUST see it. It's a little too long for its own good, but it's so much fun to watch and it's the type of movie that's so chock full of detail, visual puns, and in-jokes, you could watch it 20 times and still notice something new. So it's perfect for annual re-watching!

Groovy and atmospheric, this movie turned me into a die hard Cynthia Erivo fan. Her voice is AMAZING. I love how twisty turny this movie is and how no one is what they seem. Plus, there's a nice cozy fire at the end to put you in the holiday spirit!


Have a wonderful holiday, everyone!