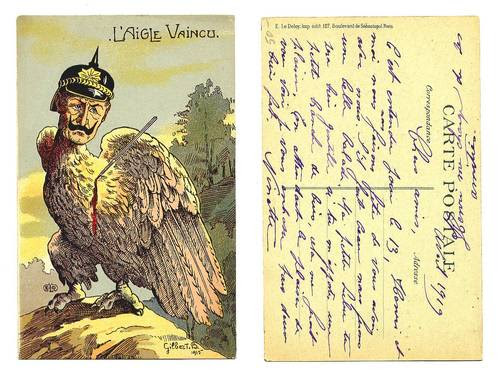 Have you ever watched old movies and noticed that the Germans are always the bad guys? If you're like me, you probably thought that was because of WWII; but actually the stereotype goes back much farther than that. There's one thing you can count on when you're reading Edwardian (c. 1900-1910) novels, and that's that everyone with a German accent is evil. This is true even of books that predate WWI by more than a decade. England viewed war with Germany as inevitable for more than a generation before it finally broke out in 1914, likely since the Franco-Prussian War in 1870, but possibly even as far back at the 1860s. The Franco-Prussian War, where Prussia defeated France handily in a matter of weeks and completely destroyed their military confidence, is likely the most important war no one has ever heard of; it led to the unification of the German states and set the stage for the debilitating Treaty of Versailles, in which France exacted long-waited revenge for losing the Franco-Prussian War.

Anyway, here is a list of books I've read recently where the Germans were evol:

Riddle of the Sands by Erskine Childers: A bourgeois employee of the Home Office goes on what he thinks will be a pleasure cruise around the Frisian Islands, only to discover a German plot to invade England through the North Sea. This is a great book!

Princess Maritza by Percy James Brebner: There is a name for these types of books and I totally forgot what it is. Basically it's like Prisoner of Zenda by Anthony Hope: some British guy goes to a small Germanic state to save the woman he loves. This book was pretty bad, and it had a whole bunch of paranoia about how Germans want to take over the world.

The After House by Mary Roberts Rinehart: I already told you guys the German is always the bad guy, right? Not to spoil anything, of course.

The Land That Time Forgot by Edgar Rice Burroughs: Bowen J. Tyler is trying to get a group of German and American sailors to work together so they can reach port, but someone keeps sabotaging the submarine. GUESS WHO IT IS.

The Green Rust by Edgar Wallace: This is probably the most hilarious case of Hun paranoia I've come across yet. Van Heerden is an evol German doctor, but he's not actually German--he's Dutch and was just born near the German border. I guess that's enough! Ahahaa.

Still, it does get slightly tiresome when EVERY German character turns out to be evil. Like really, people? You didn't get tired of that cliche after two or three or ten years? Drives me crazy.