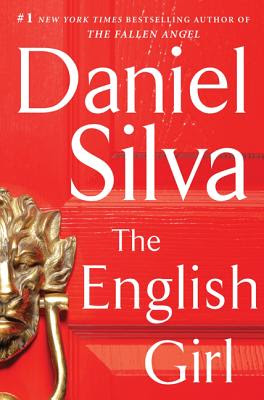 Harper sent me a copy of The English Girl for review consideration, which did not influence my review in any way.

Infamous Israeli intelligence agent Gabriel Allon is enjoying his retirement from the spy business by dedicating himself to art restoration. But when an old friend in MI-5 calls in a favor, Gabriel agrees to go on the search for a missing English girl—technically woman—who just happens to be the Prime Minister's secret mistress. Will Gabriel be able to save the girl and find her mysterious kidnapper, a man who supposedly doesn't exist?

I think this is probably the best modern (as in, not in the public domain) spy/thriller novel I've ever read. Admittedly I don't read a lot of them, mainly because they tend to bore me out of my pie holes (I'm writing this during Thanksgiving... mmmm, pie). I managed to get through Mission to Paris, I'm not entirely sure how, and I can drag myself through a Dan Brown novel (with much whining about how long it is along the way), but that's about it. Even though it's in the same genre, however, The English Girl doesn't seem comparable to those books—it blows Mission to Paris and any other spy/thriller novel I've come across out of the water in terms of storytelling, writing, and characterization.

In the beginning, The English Girl feels slightly reminiscent of the TV show Scandal. The UK Prime Minister is being threatened with the publication of his affair if he doesn't give in to the kidnappers' demands, so he does what any powerful politician would: calls in the fixers to try and cover it up. As the story progresses, however, the problem evolves from something very specific and localized—find the girl and rescue her—into something with huge consequences for the British Isles and all of Europe. That probably sounds over-the-top, but it's not entirely unbelievable, and at least one of the things Daniel Silva mentions as a potential threat to Israel in The English Girl has recently come to pass.

But The English Girl has more than solid research and plausibility to back it up; for one thing, Silva is a really good writer. There's an almost a poetic use of repetition in the novel that reminds me a bit of Charles Dickens or the chorus of a Greek tragedy. It's the use of ideas and phrases to underscore cycles within the story, rather than the repetition of plot points just because you might not have gotten it the first time. I never once felt like Silva was talking down to his readers or assuming they're idiots—Allon is smart, and there were a few times where he was a few steps ahead of me. Finally, even though Silva's writing style is by no means humorous or light-hearted, there's an underlying wit to the novel that I loved. There are some great one-liners in The English Girl, mostly coming from Gabriel. Here are just a few of my favorites:

Hamdi... had been posing as a playwright, and Gabriel had given him a death worthy of his literary pretensions.


"We have a saying in our service, Graham. We believe that a career without scandal is not a proper career at all."
"We're British," Seymour answered. "We don't have sayings, and we don't like scandals."


The English Girl is also a surprisingly emotional novel, something I've personally never encountered in a spy/thriller like this before. The director of Israeli intelligence accuses Gabriel of making emotional decisions, and it's true: even though he's a trained assassin, he's not some sort of automaton. He acts out of love, anger, and fear exactly as any normal person would, despite his far-from-normal life. But then the same is true for the other characters in the book, too, and the fact that there are personal feelings and motivations driving the characters and tying them together is one of the major reasons why I like the book so much.

I also enjoyed Christopher Keller, or "the Englishman," who serves as a foil to Gabriel. Unlike Gabriel, Keller behaves more like the trained assassins one encounters in movies and novels—a tough, cold-blooded, emotionless killer. But Gabriel doesn't buy his act, just like Keller doesn't buy into his old man routine, and watching the two of them work together is pretty entertaining.

Women also play a strong role in the novel, although it's an indirect one. The English Girl depicts, by and large, a man's game in a man's world, but those men have self-identities and beliefs that are shaped by their mothers, sisters, wives, and female friends. Again, this is an example of the emotional nature of the novel and how well-drawn the characters are. I'd hardly call The English Girl a feminist novel, but it does acknowledge the importance of women to men, and not just as some sort of sidekick or sexual object.

Finally, I liked how Silva took a standard thriller plot and turned it into something epic by taking Gabriel on a journey through the Underworld (metaphorically speaking, of course). He goes into hell and it's "white, pure white," to quote North & South. The English Girl isn't just an entertaining story, it's a book that's about something—resurrection, second chances, and accepting who you are and your place in the world.

Not that the novel was absolutely perfect, of course—Part Three was a much-too-long epilog, and there were some things that were left hanging or answered. But overall I not only enjoyed reading The English Girl, but was super-impressed with it. I am definitely going to be digging into Silva's backlist in 2014!