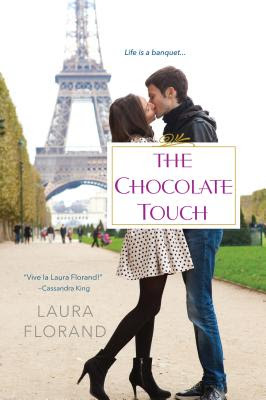 Dominique Richard is one of the best Master Chocolatiers in Paris (or actually THE best, if you ask him). But despite his beautiful salon lined with rose wallpaper and his charming staff, Dom's past makes him feel like a monster who will never deserve love. Then a mysterious woman starts showing up in his salon every day, a woman who clearly enjoys his chocolate. A lot. Dom wonders if she'll enjoy more of him than just his chocolate—IF YOU KNOW WHAT I MEAN—but will Dom and his lady of mystery ever be able to overcome their pasts in order to create a future together?

The Chocolate Touch is not the type of book I would normally pick up, but when Kelly from Reading With Analysis recommended it over Twitter, I decided give it a try. I'm so glad I did because I loooooooooved this novel. LOVED IT! I stayed up past five in the morning reading it. It's a very emotional (I love emotional books, they give my parched desert of a soul all the feels), romantic novel that captures both the tourist and local sides of Paris. And, the chocolate element isn't a gimmick to get you to buy the book—it's a major part of the story and plays a big role in all the characters' lives.

The Chocolate Touch is pretty obviously based off of the Beauty and the Beast fairy tale, although not slavishly so, just enough to give some framework to the story and characters. Dom was raised in the banlieue, one of the suburbs of Paris that's actually more like a ghetto. His home life was so miserable he started working at an abattoir, or slaughterhouse, as a teenager. Apparently slaughterhouses frequently employ child slave labor, even in so-called first world countries like the US and France, something I was completely ignorant of. With no family support and only a middle-school education, Dom worked his way out of the banlieue to become a Meilleur Ouvrier de France and the one of the most famous chocolatiers in the world.

So Dom is an admirable character. But he's also THE SWEETEST YOU GUYS. Like the scenes where he's working up the courage to talk to Jaime are too adorable and funny and awkward. And he quotes poetry! *swoooon* I'm a sucker for romance novels where poetry is quoted. J'adorée.

The other characters are really great, too. Jaime has a whole mess of secrets she takes her time telling Dom, including who she actually is. Normally the dragging out of this information would annoy me, but with Jaime I understood why she wouldn't want to talk about it. I also loved the minor characters: Jaime's curmudgeonly grandfather, so-called perfect sister, and Dom's sous-chocolatière, Célie, who reminded me of Colette from Ratatouille.

As The Chocolate Touch went on, I started to worry the story would descend into one of those annoying misunderstanding plots. You know, the ones where if the hero and heroine just had a freaking conversation all their problems would be solved. There are some big misunderstandings between Dom and Jaime, but they were more than just skin deep. They had to do with Dom and Jaime's perception of themselves, as well cultural and language issues.

Speaking of the culture and language, the city of the Paris and the French language were beautifully incorporated into the story. I absolutely loved how when Dom first hears Jaime's name he thinks she's saying, "J'aime," I love. TOO ADORABLE YOU GUYS. And Paris is perfectly captured in this novel, especially the street life and romance of the city. I also really liked the ending, even if it wasn't the traditional HEA, because I thought that was a very French way to settle into a serious relationship. If they had run off and gotten married, I wouldn't have found it very realistic, especially in the context of the book.

J'en raffolée, adorée, et aimée this book to itty bitty pieces. I want just want to cuddle it, it's such a delightful read. I definitely recommended this book to anyone who's a romantic, foodie, francophile, or all of the above. And now if you'll excuse me, I'm off to Paris to find my own chocolatier (I wish).