Review: PORTRAIT OF A SPY by Daniel Silva 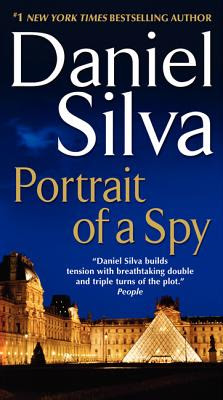 Gabriel Allon is RETIRED, dammit, and living in Cornwall when jihadists launch coordinated suicide bombings in major cities all across Europe. After running across one said jihadist in London and trying—and failing—to kill him, Gabriel is politely deported to the US, where the CIA demands his help. They want Gabriel to search out the mastermind behind the attacks, and Gabriel agrees. But will his perfectly laid plans survive the vagaries of American politics? I think we all know the answer to that question.

Things I learned from this book:

Bullet points aside, I thought Portrait of a Spy told a great story, probably the best story of the three Gabriel Allon novels I've read so far. It also reads "lighter," if that makes sense. I had the feeling like I was eating candy during this book: tasty and fun, but not very filling. Maybe I'm just getting used to Daniel Silva's writing style, or maybe the subject matter isn't as heavy or serious as in The English Girl or The Fallen Angel, but either way it seemed like an easy read.

I pretty much had no problems with this book aside from the one that's a major spoiler, so if you care avert your eyes.

In Portrait of Spy, Gabriel uses the daughter of a billionaire who supported jihadists to gain access to their bank accounts. You know pretty early on in the novel that she's going to die (because defiant women are killed, that's just the way it be), but the way she died really annoyed me. Instead of being outright murdered by her misogynist oppressors, she leaps in front of an AK-47 to save Gabriel's life. I'm aware that Silva was comparing her martyrdom, which proves to be genuinely inspiring, to that of the jihadists who blow themselves up (JWBTU? There has to be an acronym for that, the CIA loves acronyms) for essentially their own glory. But a self-sacrificing martyr seemed a little much. Actually the whole situation with her helping out the Mossad seemed a BIT unlikely, even if she did grow up in France and was a feminist, but whatever.

Other than that, Portrait of a Spy was a really good read. I think I'm starting to burn out on reading the series backward, though, even though it's been an interesting experience so far. There's a very brief mention of a character here who plays a major role in The English Girl, something I'd never have noticed or remembered if I'd read all the books in order (and which makes me wonder just how far in advance Silva plots these novels out). I do have book ten on my Kindle, but after I finish that one I might go to the first novel and read the books in proper order like a normal person. Wait... NORMAL? What am I thinking?