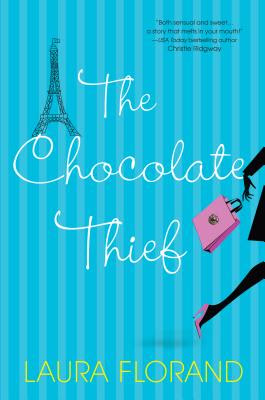 Cade Corey, the heir apparent to the multi-billion dollar business Corey Chocolate, dreams of creating the type of gourmet specialty chocolates that are made by the master chocolatiers of Paris. In particular, she's obsessed with the best chocolatier (according to the mayor and several influential critics), Sylvain Marquis. Unfortunately, Sylvain thinks her business offer is a joke and sneers her out of his salon. So Cade decides if she can't buy what she wants, she'll just have to steal it.

Going into this book, I was worried it would be formulaic. Like with Glenna Finley—my mom has about 20 of her novels, all of which I read over the course of one summer, and if you've read one you've pretty much read them all. Fortunately for all of us, Laura Florand isn't Glenna Finley. While The Chocolate Thief does have the same charming, fairy tale atmosphere as The Chocolate Touch, it doesn't follow a specific fairy tale (or if it does it's not one I'm not familiar with), and both Sylvain and Cade are quite different, personality-wise, from Jaime and Dom. While The Chocolate Touch was an emotional story about trust and perception and healing, The Chocolate Thief is a coming-of-age journey. Cade has to come to terms with what she wants versus what's expected of her.

The Paris of The Chocolate Thief is also different from the one in The Chocolate Touch—more the Paris of the American tourist. Unlike Jolie, Cade hasn't spent months in the city by the time the story starts, and she has to adjust her romantic expectations of Paris with the reality, particularly the quirks of French culture that don't make sense to Americans. For example, why is it so difficult to get a French person to give out information? It's like pulling teeth sometimes. I just don't understand. Also: French showers are crazy.

My favorite culture clash scene was when Cade went to a cafe with a food blogger and tried to order milk and they refused to serve it to her, even though a cafe would obviously have milk. When she asks the food blogger (flogger?) why, he's just like, "I think he probably just doesn't want to give Americans ideas. You people are always asking for milk in cafés, and once you let someone get away with something like that, who knows where it might lead?" INDEED. I also liked Sylvain's point of view and how he's just like, "What is wrong with you Americans? Don't you know how to eat/drink/live/etc?" Apparently not.

Anyway. The main reason I didn't like The Chocolate Thief as much as The Chocolate Touch was because the story wasn't quite as strong. Things don't start to get really interesting until Cade decides to break into Sylvain's salon, and by then we're nearly halfway through the book! (Although I did love that everyone's reaction on hearing about this chocolate thief was, "That's hot," instead of total outrage. And that she turned into a chocolate Robin Hood.) The novel was also a tad episodic, with more of a chick lit sensibility than a romantic one. Chick lit is not my favorite genre.

Stilllllll, The Chocolate Thief is delightful and definitely a book you want to read if you're a foodie. Also, the sex scenes were really hot (just in case you wanted to know) and the ending with Sylvain's family party was really sweet. I highly recommend Florand's books!