Book Review: DEAD, UNDEAD, OR SOMEWHERE IN BETWEEN by J. A. Saare 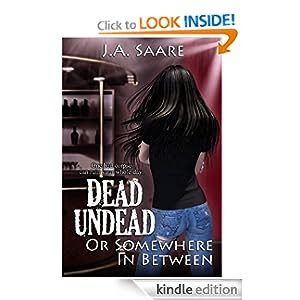 Rhiannon works as a bartender in a strip club and can see dead people. When a group of local vampires decide they need her to help solve the mysterious deaths of some of their friends, her life changes forever.

Dead, Undead, or Somewhere In Between was okay. I've never been a huge UF fan; kick-ass chicks are all well and good, but I can only maintain a limited interest in them (in print--this is another example of me having completely opposite tastes in TV and movies, because on screen I'm a huge fan of this stuff). Also, the tropes of the genre are just too ridiculous. They're like those adventure novels from the '60s where the guy has all these women throwing themselves at him for no good reason; except in UF novels it's a bunch of guys throwing themselves at a woman, and instead of fighting cannibalistic natives she fights vampires. I can handle some UF novels as long as I like the characters and there's plenty of romance (NOT every single male chasing after the one girl character, actual romance, like hearts and flowers and stuff); but while I liked the romance in this book, there wasn't a lot of it, and I thought the main character was a grump.

My general annoyance with these types of books aside, I probably would have enjoyed this particular novel more if I hadn't read the Anita Blake novels before it. I wouldn't call Dead, Undead, or Somewhere In Between derivative of that series, but there were certain scenes that felt like they were imagined directly out the Anita Blake universe, especially the scenes with Goose (a professional necromancer who is paid to settle things with the dead and can raise them and turn them into zombies). Rhiannon also reminded me of Anita Blake; but unlike Anita, who is tough as nails when she needs to be--but most of the time just really sarcastic--Rhiannon simply seemed bad-tempered. She reminded me of a teenager because she was always on bitch mode, and it didn't really seem justified. I can appreciate the fact that she has a temper, but almost everyone I know with a terrible temper seems pretty laid back until something sets them off. It's much more dramatic that way.

The author also hit on some of my personal pet peeves, like overzealous descriptions of clothing. ZOMG. I was literally begging her in my head to quit describing what everyone was wearing, not only because I didn't care and it was totally distracting, but because wearing an outfit consisting entirely of clothes all the same color is not fashion, okay? Honestly, the clothes were just boring, and if you're going to waste my time describing outfits FOR NO REASON, the clothes better at least not be boring.

Aside from what everyone was wearing, I didn't know what the point of a good half of the action was, and the fight scene descriptions were completely nonsensical. I know it doesn't really matter and these novels are really just about chicks kicking ass and then having sex with [insert paranormal creature here], but still. Scenes should, in a perfect world, have a point beyond exposition.

But! There were two things I definitely liked about Dead, Undead, or Somewhere In Between: first, Disco, who is the leader of one the "families" of vampires (why do vampires always travel in packs?). He was so cute and sweet! Second, the ending--about the last twenty percent or so--was where things finally got really interesting. Again, I'm not 100% sure why certain things were going on (why was Rhiannon wearing an obviously evil amulet all the time?), but at least I wanted to know.

So, all my personal grievances aside, those who enjoy urban fantasy and don't have migraine-inducing pet peeves about clothing descriptions probably won't have any problems with this novel. I have a feeling the series might pick up some steam as it goes on. And I want to say thanks to Colette from A Buckeye Girl Reads for convincing me to read this book and not being TOO upset that I didn't like Dead, Undead, or Somewhere In Between as much as she did.