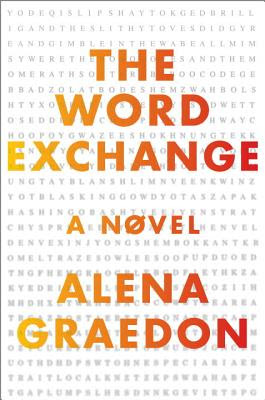 I received a copy of The Word Exchange from the publisher for review consideration via Netgalley. For more on my review policies, please see my full disclosure page.

In our not-too-distant dystopian future, the world is connected through Synchronic Memes, the next generation of smartphones that anticipate their owners' needs. Feeling sick? Your Meme will order a hot toddy for you in a restaurant even though you were planning on ordering water. Trying to come up with a specific word and drawing a blank? Simply look at your Meme and the word will pop up! Synchronic got all these words by buying up dictionaries and publishing companies; but when the editor of the last surviving dictionary in North America disappears just before Synchronic announces a new device that literally inserts into your brain, the editor's daughter, Ana, begins to suspect Synchronic's devices aren't as helpful and benign as they claim.

Guys, it took me soooooooooo long to read this book. Not that I wasn't enjoying it while I was reading it—if I hadn't been I would have DNF'd it—but by the time I got to the end I kinda felt like the time I invested in it wasn't worth it. So that was annoying.

Let me back up: I started The Word Exchange in a bit of a MOOD, but it immediately sucked me in. The story starts off with Ana immediately discovering her father is missing. She knows something's very wrong but she has no idea what. Then the point of view switches to Bart, her father's favorite employee, who is secretly in love with Ana. I absolutely loved Bart! The way he expresses himself is so unique—he uses a lot of really big and obscure words. It sounds tedious but it's actually really charming. Alena Graedon is super clever in the way that she uses Bart's speech patterns to give the reader a sense of how malignant and pervasive word flu is. There IS a lot of backstory at the beginning of the novel, but being so invested in Bart and his storyline, I didn't care.

It was around the middle of the book, after Ana discovers the Nautilus sweatshop, that my patience started to wane. There was a whole lot of wondering what was going on and not much explanation or investigation into discovering answers. Also, at that point I was getting pretty sick of the backstory. I may have started skimming a little.

Then came the end. WHAT A DRAG. Lots of explanation about stuff I didn't care about at all, drawn out for the longest possible time with little in the way of a satisfying emotional resolution. I could have skimmed like a mutha through the second half and still would have gotten the same result as far as closure is concerned.

That said, I still recommend this novel.

I know, I know. Yes, a bad ending can completely ruin a book, but I think The Word Exchange is clever and well-crafted enough to check out anyway. If I hadn't been busy that month (yes, it took me around three weeks to finally finish this thing), it probably would have gone a lot faster (? Maybe. Initially my Kindle told me it would only take 6 hours to read, although how that's supposed to be possible when there's one chapter for each letter of the alphabet and each chapter takes an hour to finish, I don't have any earthly idea). Graedon takes numerous high-concept ideas and complicated theories and synthesizes them all into something that's easily digestible and approachable, with a relatively good story to boot. I thought The Word Exchange was going to be pretentious and annoying, but it's not—for the most part it's surprisingly fun and fast-paced.

Finally, there's just something so, so right about reading a book where smart phones destroy our civilization WHILE ON A SMART PHONE. Oh, the delicious irony.

The Word Exchange is a really good book, but not a satisfying one. If you're into literary thrillers or books about books, though, you should definitely give it a shot.