Review: THE BOOKSELLER by Mark Pryor 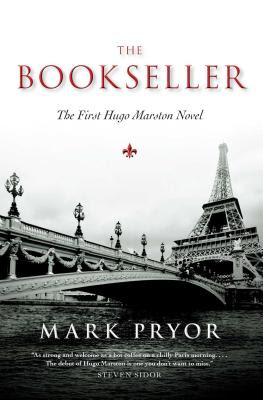 Hugo Marston is the head of security at the US Embassy in Paris and a bibliophile, which is how he comes to know Max, a bouquiniste—one of the people who sell used books from stalls along the Seine. While chatting with Max one wintry day, Hugo witnesses his old friend being kidnapped, but the police refuse to do anything or even believe Max is in danger. So Hugo takes matters into his own tentacles and decides to do some investing on his own time, with assistance from his CIA friend, Tom, and a beautiful Parisian journalist. Will he be able to discover why Max was taken and if he's still alive?

I am on a serious Paris kick lately—not intentionally, but maybe subconsciously. First there was The Chocolate Touch, Chocolate Thief, and Chocolate Heart by Laura Florand (I basically spent all of April reading Florand novels), and now The Bookseller. But this novel shows a very different Paris from the one in The Chocolate Touch or Thief—this is Paris' dark side, locked in gunmetal grey skies, where a person can disappear as if they never even existed. I kind of loved it. The Bookseller isn't a perfect novel, but it has a lot to recommend it.

First of all, this is the type of book that has everything you want in a noir-ish type mystery: mysterious women who may not be trustworthy, friends who drink too much and have their own agenda, hidden messages, Nazi hunters, gangs, lying cops, corruption, aristocrats, a smart-mouthed secretary, an American who wears cowboy boots. Add in a bunch of Agatha Christie references, a glimpse into the culture of bouquinistes (which I had never really thought about), and several books with incredible histories attached to them, and it would be pretty difficult to make me NOT like this novel.

The main character, Hugo, was also really well-drawn. He has an extensive history; at times The Bookseller felt like the second or third book in a series, not the third. And unlike many mystery heroes, Hugo is uniquely qualified to investigate a kidnapping on foreign soil—in addition to being head of security, he used to work for the FBI (or was it CIA? Anyway...), and he knows his way around guns and stuff, because 'Merica.

That being said, there were a lot of coincidences in this novel that were just too convenient and never explained, aside from being coincidences. Why does Tom just show up suddenly in Paris? Even if he did have a thing going in Marseilles—which sounds fishy—that's not exactly in the neighborhood. And the sexy reporter who hits on Hugo just HAPPENS to be tangentially involved in Max's disappearance? Mmmrkay.

But on the plus side, at least there was more to the investigation than just walking and talking, and you really can't beat the setting. The Bookseller is a very promising start to a series, a book about books, and I wouldn't be averse to reading the further adventures of Hugo. Definitely worth checking out!