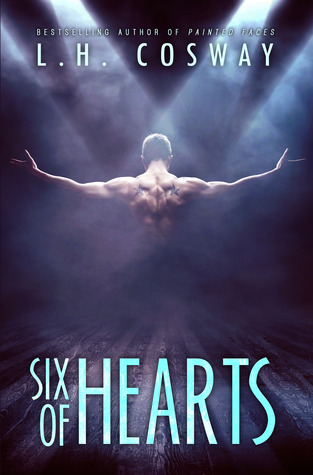 When street magician and illuuuuuuuusionist Jay Fields walks into the law offices of Matilda’s father, little does she know Jay will change her and her father’s lives. Although her father refuses to represent Jay against a newspaper in a libel case, it just so happens he has a room to let in their home, and Jay is in need of a place to live. As Matilda and Jay spend more time together, their mutual attraction becomes undeniable, but Matilda senses there’s more to Jay’s libel case than meets the eye. Will Matilda still want him once Jay pulls the curtain on his final trick?

I do enjoy LH Cosway’s novels, but Six of Hearts just didn’t come together for me. It’s a good thing this novel was obviously a revenge story (I’m a sucker for revenge stories), or I might have drifted off to another novel before I finished it.

My biggest problem with Six of Hearts was plausibility. I had a very difficult time buying into some of the things that happened early in the book—for example, the third bedroom that Matilda’s dad was trying to rent. It was way too convenient, not to mention weird. Or like when Jay easily convinced Matilda to go to a casino to “make money” for a sewing machine she’d been saving up for—one doesn’t gamble to “make money,” unless one is planning on cheating. That’s just common sense, and I found it difficult to believe that Matilda, who was clearly a planner and conservative spender, would so easily agree to risk her savings that way.

And then there was Matilda’s refusal to recognize Jay’s attraction to her, which was INSANELY obvious. I mean, I get that she’s shy and not very confident, but 200 pages was way too long to drag that shit out, especially when the guy in question was taking her out on dates, spooning with her in bed, acting all jealous when she saw other guys, etc. etc. Newsflash: HE LIKE-LIKES YOU, GIRL. YOU’RE JUST BEING STUPID NOW.

I also didn’t find the main characters to be as well-drawn as in previous Cosway novels like Still Life with Strings and Painted Faces. For an illuuuuuuusionist, Jay didn’t seem to do many tricks. I did like that Matilda had a hobby—dressmaking—but the sewing machine was the only prop to support it. There were no dress forms or mention of fabrics and where she stored them, and her descriptions of fashion and clothing was cursory at best. Niggling little details, definitely, but they bothered me.

That’s not to say the book is bad—I adored the basic concept of Six of Hearts and Cosway kept me engaged through the whole novel, even when I thought it was being a bit ridiculous. But I also suspect that, in the hands of a more skilled writer, this story could have been amazeballs instead of just okay. For example, if Arthur Conan Doyle had written this novel, he’d have had me convinced one thing was going on when it was actually a completely different thing. If Alexandre Dumas had written Six of Hearts, the plot would have unfolded with the precision of ticking clock and I’d have been blindsided by how Jay set it all up.

Neither of those scenarios happened here, and I feel like EXPECTING those things to have happened is reasonable because Cosway references the work of both those authors in the book. It was like she was aware of how she could have played with the similarities between magic and great storytelling, but instead of actually trying to do that she focused most of her energies on the relationship between Jay and Matilda. And while I did like them together and thought they had great chemistry, I didn’t think that alone was enough to support the entire novel.

So, somewhat of a mixed bag for me on this one. But Six of Hearts is still a better and more interesting read than 80% of contemporary romances out there, so worth the buy I’d say.