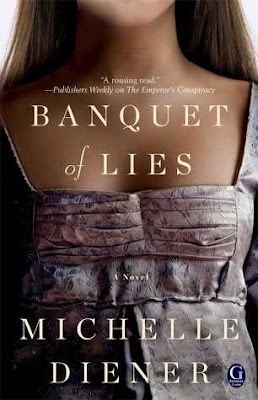 Guest review by Anachronist of Portable Pieces of Thought.

A Secret Treaty and a Secret Life
LONDON, 1812: Giselle Barrington is living a double life, juggling the duties of chef with those of spy catcher. She must identify her father’s savage killer before the shadowy man finds her and uncovers the explosive political document her father entrusted to her safekeeping.
Posing as a French cook in the home of Lord Aldridge, Giselle is surrounded by unlikely allies and vicious enemies. In the streets where she once walked freely among polite society, she now hides in plain sight, learning the hard lessons of class distinction and negotiating the delicate balance between servant and master.
Lord Aldridge’s insatiable curiosity about his mysterious new chef blurs the line between civic duty and outright desire. Carefully watching Giselle’s every move, he undertakes a mission to figure out who she really is—and, in the process, plunges her straight into the heart of danger when her only hope for survival is to remain invisible.

I might surprise you with this statement but historical romances written by Michelle Diener have several serious assets. Firstly, as far as I know, every one of them is based around a Regency historical event, be it the assassination of the British Prime Minister, a French plot to bleed British gold out of the country or, as it was this time, a secret change of alliances between Russia and France in the middle of the Napoleonic wars. As a result (and secondly) the characters have something more to do than to attend parties, woo the people they fancy and defeat their romantic rivals. In my humble opinion it makes the reading far more enjoyable.

I also appreciate the fact that Diener’s romantic heroines are usually independent, intelligent women who usually have a set of interesting skills apart from just being pretty. In the case of Gigi, the female lead of Banquet of Lies, it was her cooking skills, especially when it comes to gourmet French cuisine. I admit I warmed up to her from the first chapter and I wasn’t surprised Lord Aldridge, her male love interest, was so taken with her instantly. Insta-cooking-love is far more palatable than any other kind of infatuation and the girl in question could cook and bake like an angel (or rather like a three-star Michelin chef) – who wouldn’t love to have such a wife/husband/partner?

Let me also say that the lack of any explicit sex scenes actually improved my reading experience: mainly because I wasn’t ‘treated’ by different artificially ‘historical’ terms describing male and female sexual organs *shudders*; I also found it closer to the beginning of the 19th century’s standards.

Still there were problems which decreased my reading pleasure.

It grated a bit that, despite well-rounded characterizations I appreciated and enjoyed so much, all main characters were just obnoxiously handsome and/OR pretty (I bet you can be handsome and pretty at the same time, right?). I am really sick and tired with a message most of romantic fiction books try to convey: esthetics means EVERYTHING; if you are nice to look at you’ll be loved, happy and successful. Alternatively you might be an illegitimate daughter of a whore, with the whole street of potential candidates for fatherhood, or a thieving son of a gangster but, as long as you look nice people will give you second, third or even fourth chance. SO. NOT. TRUE.

My other issue concerned the way these Regency lords and ladies thought and behaved in this one. It was so strange to find out all of them had a quite modern mindset, not influenced by religion or any other prejudices so typical for those times. It reminded me of the fact that in Persuasion by Jane Austen, a Regency novel written actually in Regency times by a Regency author, it was a quite important issue for Anne Elliot, the main heroine, that her cousin who courted her for some time dared travel on Sunday and didn’t attend church. Well, in Ms. Diener’s Regency novels virtually nobody attends church or thinks about religion at all – go figure.

What's more? Here is a quite juicy tidbit: after Giselle Barrington's diplomat father is murdered at the beginning of the story, Giselle, a young girl, travels from Sweden to England with all her bags and whatnots completely unattended. Mind you nobody seems to care or notice that a respectable miss goes on such a long distance trip without a chaperone, a maid or a male relative in tow. What's even stranger, none of the super-duper kick-ass-and-kill-on-the-spot spymasters in this book has ever heard of ship manifests, let alone checked one to find out whether the girl actually left the countr. Hmmm...let me quote here Mr. Eastwood who expresses my feelings the best:

Oh, and as I've already started to complain: I would love to learn more about Mr Edgars who had such a potential (underdeveloped unfortunately) that he could have overshadowed both bland Aldridge and the rest of secondary characters...

The cover: somehow bland. Show me your face, pretty lady, and then show me your cooking, not just your tits...ehem, bosom...

Despite its shortcomings one of better historical romance novels I’ve stumbled across. If you like Regency England, secret plots, secret services and no-nonsense heroines you might want to try this one.