Take A Chance Challenge: The Firemaker 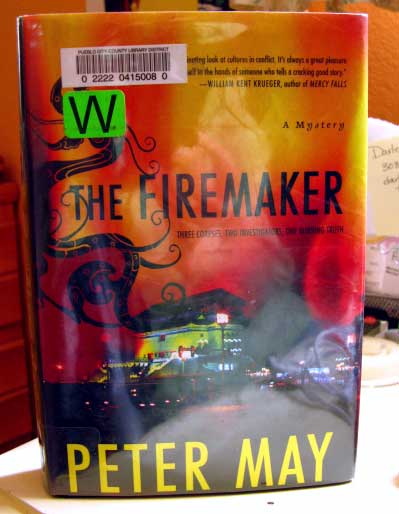 The Firemaker by Peter May

I read this book for the Random Book Selection portion of the Take A Chance Challenge hosted by Jenners at Find Your Next Book Here.  Here's the challenge:

Go to the library. Position yourself in a section such as Fiction, Non-Fiction, Mystery, Children (whatever section you want). Then write down random directions for yourself (for example, third row, second shelf, fifth book from right). Follow your directions and see what book you find. Check that book out of the library, read it and then write about it. (If you prefer, you can do the same at a bookstore and buy the book!)

Before I left for the library, I wrote down, "4th row from entrance, 3rd shelf on right, 2nd shelf from top, 28th book from left."  My library has all the fiction books grouped together, so I didn't know if I was going to get a fantasy or mystery or whatever.  Except I accidentally picked the book 28th from the right instead of the left, so... clearly I need a t-shirt that says "I follow directions well."

Anyway, the book I wound up with was The Firemaker by Peter May.  It takes place in modern-day Beijing, where Margaret Campbell, a forensic pathologist, has come to teach at the police academy.  As she's being driven to the academy, her car hits a bicyclist with a "square-jawed high-cheek-boned face."  He's really tall and has big hands, too.  Turns out the guy is Deputy Chief Inspector of Section One (or something like that) Li Yan, and Margaret has mortally offended his manly sensibilities by giving him a dressing-down for not looking where he's going.

Li Yan writes Margaret off as a stupid foreigner; but after she assists on an autopsy of a burn victim, he can't help thinking, over the scent of burnt flesh, that she's awfully cute.  Before you know it he's taking her out to lunch, then ice cream; and then she's "assisting in the investigation," and meeting his uncle.  After a date that runs about 20 hours, involves many drinks, karaoke, nightclubs, teahouses, restaurants, street food, and hanging with Li Yan's BFF, Margaret spends the night in Li's apartment.  But will their love be able to last???  When Margaret returns to work the next morning, she's informed that everyone in Beijing knows she slept at Yan's place, and that she broke the law by doing so and is on the verge of being fired.  Pissed off, Margaret quits and books the next flight to the US; but Li Yan doesn't want her to goooo!  Will Margaret leave China & Yan?  Will Yan quit his job and move to Chicago to be with her???

Oh, yeah, and in the middle of all that there's a murder mystery.  But I skimmed through that part.

This is a mystery novel, but the mystery is laaaaaaaame.  It starts off promising:  three dead bodies discovered in Beijing, all with a Marlboro cigarette nearby.  But as the mystery goes on, it involves rice genetics (yes, rice genetics--sexy, no?) and a huge conspiracy in the Chinese government.  Now, I don't know that much about the Chinese government, but the author spends considerable time telling us that everything everyone does is seen and observed in China by everyone else.  So then I'm supposed to be convinced a conspiracy is possible in that sort of environment?  Okaaaay.

Not only is the mystery itself unconvincing, but the sleuthing skills of our noble detectives are just sad.  There's a scene at the beginning of the book where Margaret identifies one of the dead guys; it's supposed to be amazing and impressive, but I could have figured it out.  In fact, practically all the "clues" Margaret and Li Yan suss out are pretty obvious.

There is one fun part of this book:  the descriptions of Beijing and culture there.  I loved hearing about how the schools in China were organized, how people greeted one another, and how cooperative Chinese society is in general.  Not to mention the food, parks, and entertainment scene of Beijing.

Other than that, though, this book wasn't very good.  The mystery was not mysterious, the romance was pretty predictable and full of tropes, and the ending was unnecessarily dramatic and completely unbelievable.  I loved sexy Li Yan, but Margaret was annoying.  Oh!  Annnnnd all the American characters talked and acted as if they were British.  Shocker, the author is from the UK.  So why didn't he just make Margaret be from the UK if he obviously can't write a believable American character????  Lordy lordy lordy, that was annoying.

So, yeah, the novel had good points, but I really can't recommend it.