Children's Books That Freaked Me the Hell Out

Rebecca from Lost In Books interviewed me for her blog last night (check it out here--yes, that's an order), and one of her questions started me thinking about books that scared me.  A book hasn't really scared me since I was a kid.  And this started me on children's books that fightened me when I was really little.

Harold and the Purple Crayon

As an adult, I can see why this book might be considered cute and entertaining; as a child, however, I thought it was wrong on soooo many levels.  Harold lives on a blank page with no friends or family.  To create a home, he has to draw all these things with a purple crayon--even a bed and a window to look out of his prison-like existence.  Then one of his friends drawn friends turns on him and attacks him, so he has to erase him!  (Note:  I may be mixing up all the Harold books, since my parents insisted on buying more of them despite the fact that I would run and hide every time I saw them--the books, not my parents.  Well, not usually my parents.)  To me this book was horrifying.  A child out alone in the world, without even a house and only a purple crayon?!  What in the name of god is the world coming to??  And what sort of twisted powers does this crayon have, anyway?  Everything Harold creates turns to ruin!  To this day I avoid purple crayons. 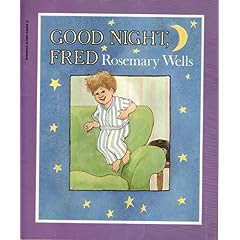 Fred is being baby-sat by his older brother, and he wants to call his grandma.  But the phone is broked.  So Fred's older brother tries to fix the phone and Fred eats cake (OM NOM NOM NOM).  It finally gets late, and Fred has to go up to bed without calling his grandma because the phone isn't fixed... this is where it starts getting freaky.

Fred wakes up from a deep sleep and decides he wants some moar cake.  As he's walking to the kitchen, the broken phone rings!  It also glows with an eerie yellow light.  Like a fool, Fred picks up the phone, but he doesn't talk to anyone because a miniature leprechaun version of his grandma leaps out of the phone!!!!  OH MY FREAKING GAWD.  Is she dead?!?!?  How she can travel through the phone??? O_o  Is that even really his grandma?  What if it's some evil spirit disguised to look like his grandma?  Grandmas don't just pop out of the phone everyday, you know, Fred!

Whenever I see this book, I'm always surprised at how tiny and slim it is.  In my mind's eye, I see it as really large and shrouded in darkness.  I also blame this book for my aversion to phones.