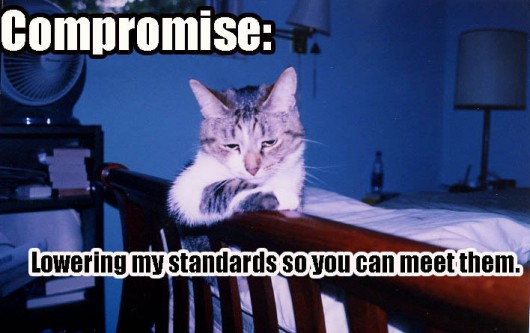 From what I can tell, most of the disagreement stems from publishers' claims of being "gatekeepers" to published work. If publishers are holding books to higher standards, it would make sense (-ish) that self-published work wouldn't meet those standards. But the gatekeeper argument lost any credibility with me a long time ago. If you're going to publish a non-fiction book that cites Wikipedia as a source--not once, but numerous times--and expect people to pay $17 for it, you don't have the right to claim you have standards of ANY SORT (see my review of The Founding Foodies here). And I think we've all encountered books published by the Big 6, especially eBooks, with spelling, grammar, and formatting problems.

Even though I think traditional publishers necessarily have higher standards, though, at least with a traditionally published book you know it went through some sort of process. An editor at least looked at it. You have no idea what the process of publication is for a self-published work. I know several self-published authors who hire editors and their work is very professional and polished; then are others who also hire an editor, and their books are riddled with errors. And then there are those who don't hire editors at all. All of these books are equally available in the digital market, and not necessarily priced accordingly. Should we approach them equally?

Honestly, I don't think you can hold everything to the same standard. When I teach, I don't have the same expectations for a gen ed class as I do an upper division course. I have a higher standard for books by my favorite authors than I do books by unknown authors; or even books with prettier covers versus plain ones. I'm not sure there's any such thing as approaching a book completely unbiased, but if there is, it doesn't happen very often.

Personally, I don't think the customers' standards should even be an issue--everyone has different standards and expectations. The question that really matters is what are the producers' standards? If the people producing content don't take pride in their work, one has to wonder why they're even bothering to write and publish in the first place.

Do you have lower expectations for self-published work?