Anna is married to this guy named Aleksei, who is honestly kind of a prick. When she goes to Moscow to visit her brother, she runs into dashing cavalry officer, Count Vronsky. It's love at first sight! But Anna's a married woman and tells Vronsky to leave her alone. Instead, he stalks her for the next hour, and then Anna's hubby is all, "You're behaving improperly BLAH BLAH BLAH." So Anna figures if people are just assuming she's sleeping with Vronsky, she might as well sleep with him! And Vronsky bangs the brains right out of her head.

This version of Anna Karenina takes place almost entirely in a theater and is extremely stylized. It's a little strange at first; during the opening scene I was like, "What is this and why am I watching it?" But then I was totally sucked in and the theater setting seemed to work naturally with the themes of the story. I felt that by making the staging obvious, the story was allowed to dominate and I didn't have to sit through the typical explanations of what's going on that would have slowed the pace of the movie. Plus, IT'S A METAPHOR DUDE. A beautiful Russian metaphor. 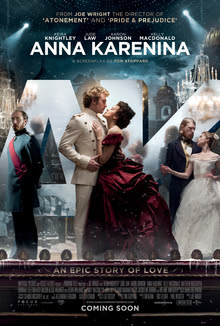 In addition to the gorgeous sets, you've got beautiful costume design (I found it really interesting that Anna wore black when she was "innocent" and white after she was a notorious adulterous--I thought that was a great way to demonstrate how appearances and reality never mesh with her) and perfect casting. I loved Matthew Macfadyen most especially, who plays Anna's brother, Oblonsky. He was hilarious! He was like Gaston's crazy uncle in Gigi, only Russian and married. It was great to see Macfadyen in a role where he wasn't being dour. I also loved Ruth Wilson as Princess Betsy. That is an awesome character!

As for Anna, I have SO MANY FEELS. For one, I LOVE her. I've seen other people call her selfish--and she is, especially at the end of the movie--but I also really admired her and thought that for most of the movie she was trying to make the best of a soul-sucking situation where she was miserable. But then on the other hand, I was also like, "Girrrrrrl, what were you thinking." I was totally with Anna up until right after she gave birth to her daughter. To me, this was the turning point in the movie, particularly when Aleksei asks her, "What do you want?" This is an honest question and deserves deep consideration, but I wasn't sure Anna knew what she wanted when she answered. She said she wanted Vronsky, but maybe she just wanted passion in her life. Of course, Aleksei's never going to give that to her; but on a practical level her decision to leave with Vronsky really made no sense. She loses everything for herself AND her child, and all she gains in return is him. Why would she choose Vronsky? And then the whole thing with them returning to Moscow and her INSISTING on trying to be accepted in society and going into a panic spiral when she's not... WHAT? Don't tell me you didn't see that coming, Anna. You had the guts to tell society to go fuck itself and I respected you for that; now have the balls to deal with the consequences. Basically I think Tolstoy fell in love with Anna as he was writing the book; but then he remembered he was trying to be moralizing, so he forced her to act in a way that made no sense in order to teach Team Vagina that if we cheat on our husbands, WE WILL DIE. PS, if you know of a 19th-century novel where the adulteress main character doesn't die, please let me know. 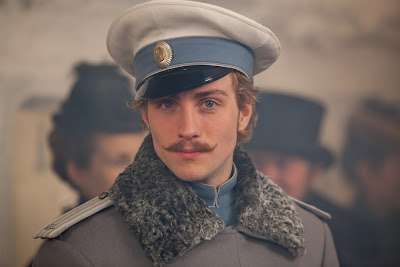 You know you want to lick that moustache.

Still, the central question of Anna Karenina seems to be, did Anna really love Vronsky? Not because if she did love Vronsky it would excuse her behavior, but because the message of the story is different depending on how you answer that question (I know we were spoon-fed a message about lust and all that, but I decided to ignore it). And honestly, I don't think it's a question that has a definitive answer. Personally, though, I believe Anna did love Vronsky, because unless he had some magical penis or something, I don't think Anna would give up her son just because she found a guy sexually attractive. Maybe her spiral into jealous crazy town was simply a result of her love not being shored up by faith and hope.

Anyway, even though I had some issues with the story itself, I thought Anna Karenina was a really, really good movie. I loved how stylized it was, while still being very emotional and focusing on the characters of the story. I haven't read the book, but I think this might be one of the best book-to-movie adaptations I've ever seen. I can't wait to watch it again.