Proposed alternate title: Crossing the Line with the Duchess (it is said twice) 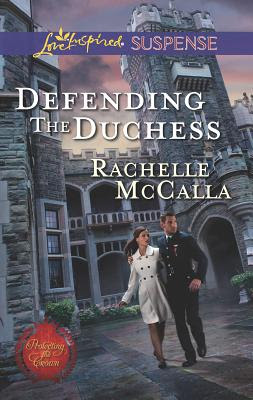 Julia is visiting her sister, an American who married into the royal family of a very obscure country in Central Europe named, for some reason, after Elizabeth Bennet's flighty sister. Anyway, now that her sister is a queen, Julia is slated to become a royal duchess--if she survives long enough to make it to the ceremony! Fortunately, she has a bodyguard with the unlikely name of Linus to keep her safe. Nothing's sexier than safe!

Defending the Duchess started out pretty good, with Julia almost immediately being abducted and Linus chasing after her. Very exciting! Buuuuuuut then the book became all about finding out who attempted to kidnap Julia and why, and it had something to do with engines, and I just really did not care. The less I know about the MacGuffin the better, and unfortunately Defending the Duchess was 90% blah blah blah about engines and legal documents and cars. Snoresville, especially since it seemed like the author didn't know a whole lot about any of those things.

I can understand why there was so much about the MacGuffin, though, because without it the book would have been fifty pages! There was no character development at all and very little romance. Julia was the most bizarrely weak character, both physically and emotionally, that I have come across in a long time. Maybe ever. She bangs her shin and is completely unable to walk; she gets a phone call from the baddy bad guy and "whimpers"; and whenever one tiny thing goes wrong she has an emotional breakdown and can't deal. I'm not saying I'm a rock or anything, but how on earth did she make it through law school if she faints at every sign of conflict?

Also, the writing was super-stilted. When Defending the Duchess first started I found it a bit hilarious ("The handsome guard's chivalrous actions;" "Julia caught a whiff of a manly scent;" "Were all royal guards so perfectly sweet and attentive? Julia couldn't recall a time when she'd felt so pampered;" "Julia felt her heart warm a little more for the thoughtful guard;" etc. etc.), but after a while it started to wear on me, especially when there was nothing interesting going on in the story.

I'm not sure why I kept reading, except that I'm a sucker for Ruritanian romances and I kind of liked Linus (even if I did think of the movie Sabrina every time I saw his name and reflect on how that's the most inappropriate name for a bodyguard ever). I skimmed through most of it, I'm not going to lie, and was pretty relieved when it was over. Nevertheless, I might consider reading the next book in the series, even though I have no idea what other relatives King Thaddeus and company are going to dig out of the US.


ETA: Oh, oops! I forgot to add, I got a copy of this book from the publisher for free on Netgalley. Thanks, publisher!